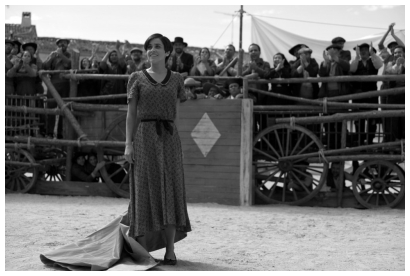 Someday My Steer Will Come? In Blancanieves, Spanish director Pablo Berger takes the classic tale of Snow White and the Seven Dwarfs, sets it in Seville in the 1920s and recasts it as the tale of an orphaned daughter of an illustrious toreador who, despite the machinations of a wicked stepmother and with the help of, yes, seven dwarfs, follows her father's footsteps into the bullfighting ring. Shot as a silent film with stunning, luminous black-and-white cinematography and an impressive musical score to match, Berger lets elements of the original fairy tale peep through -- there's even a poisoned apple -- but takes the narrative into its own romantic, stylized world. It's fantasy, but of a grounded kind, summoning back to the screen the achievements of European cinema at the end of the silent era.

Click on the player button to hear my interview with Berger, or right-click the title to download.