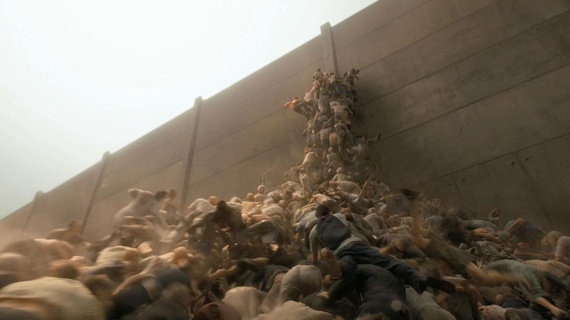 In the Brad Pitt movie World War Z hordes of zombies rush to the city walls of Jerusalem, erected to keep them back. In a frenzy they clamber over each other, creating a human ramp, and swarm into the city. This terrifying scene is a vivid metaphor for the future. Donald Trump (and any one else in the US) is deluding themselves if they think building a wall will keep migrants out. There will be too many of them.

The wave of desperate people flooding into Europe today, breaking through fences and police barriers, provides a glimpse of our future. If we continue to ignore science's warnings about climate change, mass migrations on a truly apocalyptic scale will inevitable follow. A recent Time Magazine article declares that a drought in Syria between 2006-2011 increased poverty and is partly responsible for the Syrian refugee crisis.

As sea levels rise, coasts flood, forests burn and croplands turn into deserts, hundreds of millions of people will be on the move. The densely-inhabited tropics will be hardest hit. People with nothing to lose will head to Europe and the US, by land and by sea, in numbers that will simply overwhelm all efforts to stop them. (See: climatemigration.org.uk).

Imagine an endless flotilla of refugee boats arriving each day from Central and South America, Africa and Asia.

I don't believe this is a partisan issue. We all want our governments to be able to control who comes into our country and how they are assimilated. I think everyone agrees with that, whether Democrats of Republicans.

In the new novel, 600ppm, author Clarke Owens realistically imagines a town in Ohio in 2052. One of the features of this grim future is a constant influx of refugees living in vast tent cities - many of them coming from burnt out California, the flooded East Coast, and slowly submerging Florida. A new law is passed - everyone with a spare bedroom must allow a refugee family to live in it...

If not a wall, is there some other way to hold back a climate-driven migrant apocalypse?
No.

Prevention is the only protection. So if Illegal migration is a burning issue for you today, please re-examine your resistance to Climate Change.

One person I wish would read this article is Senator James Ihhofe (R-OK), who chairs the Senate Committee on Environment and Public Works. In a MSNBC interview with Rachael Maddow in 2012, Senator Inholfe candidly admitted why he denied Climate Change: "I was actually on your side of this issue when I was chairing that committee and I first heard about this. I thought it must be true until I found out what it cost." (see ThinkProgess.org)

Inhofe was speaking of the economic costs of switching over our economy to clean energy. But what about the costs to American society of the migrant apocalypse?

Here's three things you can do to make a difference:

1. Demand strong US leadership for a binding global deal on Climate Change prevention. Representatives of all nations in the world will be negotiating and signing an agreement in Paris this December. Current national commitments - including ours in the US - are too weak to prevent catastrophic heating of the planet, as has been widely reported. (see Reuters).

2. Demand strong US support for the Green Climate Fund. This new agency was created to fulfill the promise of rich countries to help poorer nations pay for transitioning to clean energy and adapting to Climate Change. Helping these countries prepare now will lessen the numbers of climate-disaster refugees in the future. The US Administration has committed $3 billion towards this fund, but Republican leaders in Congress won't authorize the payment. This is undercutting the viability of the Fund, and setting a poor example for other rich nations. (See nationaljournal.com)