MOIN, Macedonia (Reuters) - Hundreds of migrants and refugees marched out of a Greek transit camp, hiked for hours along muddy paths and crossed a rain-swollen river to get around a border fence and cross into Macedonia, where they were detained on Monday, authorities said.

A Macedonian police spokeswoman said the "several hundred" people who had crossed into Macedonia would be sent back to Greece. A Reuters photographer put the number who crossed as high as 2,000. Around 30 journalists who followed the migrants were also detained, witnesses said.

Earlier, Macedonian police said three people - two men and a woman - had drowned crossing a river near the Greek border that had been swollen by heavy rain.

The migrants and refugees crossed the border just days before leaders from the European Union and Turkey are due to meet again to seal an agreement intended to keep migrants in Turkey from moving to Europe through Greece.

At least 12,000 people, including thousands of children, have been stranded in a sprawling tent city in northern Greece, their path to the EU blocked after Macedonia and other nations along the so-called Western Balkan route closed their borders.

On Monday, more than 1,000 migrants and refugees streamed out of the camp, setting off to find a way around the twin border fences Macedonia built to keep them out. A second group of migrants, many of them from war zones in Syria and Iraq, later followed them.

Heading west in a cavalcade snaking along muddy paths, the migrants, wrapped in coats and hats, carried their belongings in rucksacks and bags. Many were children, some walking, others riding in strollers. Some made victory signs as they walked.

When they reached a river, they stretched a rope across it and formed a human chain to cross, Reuters photographer Stojan Nenov said. They carried children across on their shoulders.

Once over the river, the migrants walked along the border fence until they found the point where it ended in mountainous country. But after they crossed the border, Macedonian soldiers rounded them up and put them migrants in army trucks.

"We are taking measures to return the group to Greece," the Macedonian police spokeswoman said.

Greek police appeared to make no attempt to hinder the first group to leave the camp, but they blocked the second group from continuing. The migrants managed to break through and went on.

UNHCR regional spokesman Babar Baloch said conditions in the Idomeni camp in Greece were difficult after days of heavy rain. "This is not a proper camp. People are exhausted, tired and running out of patience," he said.

More than a million people fleeing war and poverty in the Middle East and beyond have flooded into the EU since early 2015. Most made the perilous sea crossing from Turkey to Greece, then headed north through the Balkans to Germany.

In Berlin, German Chancellor Angela Merkel said on Monday there was no question Germany has benefited from the closure of the Balkan migrant route. A day earlier, voters in three regional elections had punished her conservatives and flocked to a new anti-immigration party that wants German borders closed.

But Italian Prime Minister Matteo Renzi said it was time to say enough to the selfishness of countries that thought raising a wall was a lasting response to the migrant challenge.

"How long do you think a wall might last in the Internet age," Renzi told students in Rome. "How can you defend a border when terrorists are born and raised in our cities?

"How long can we turn a blind eye on all this, looking only at our next election, instead of patiently continue working at the European construction?"

PHOTO GALLERY
Migrants And Refugees March Out Of Idomeni 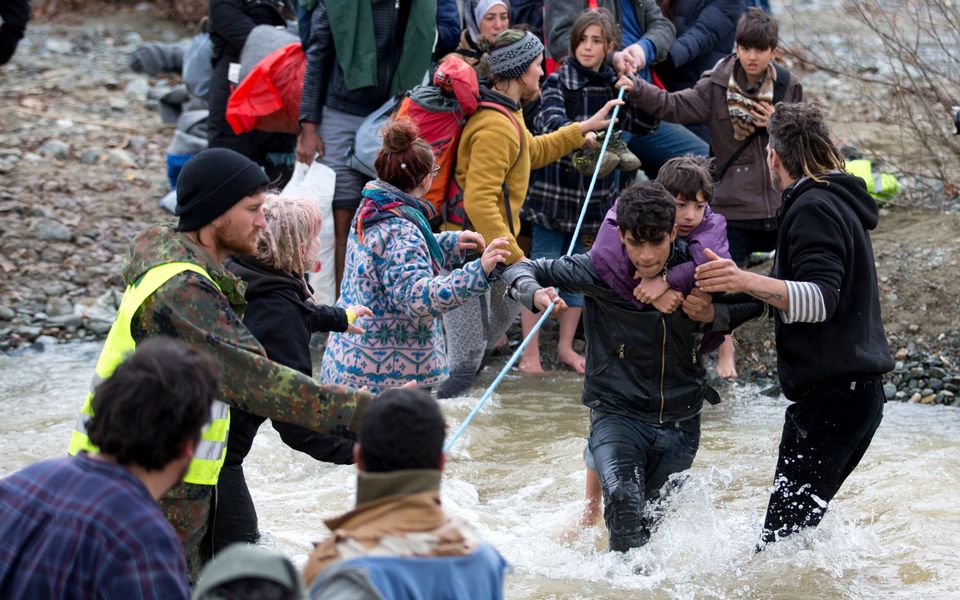 1 / 12
Migrants try to cross a river after leaving the Idomeni refugee camp, on March 14, 2016 in Idomeni, Greece.
Matt Cardy/Getty Images