Henry Louis Gates is the new Gate, thanks to President Obama, who, by using the word "stupidly" in context with the arrest of Gates in his own Cambridge, Mass. home during the most tragicomic 911 call in the history of the world, has destroyed the beautiful racially transcendent dream we've all been living since Election Day. Today, Obama had to walk back his remarks in front of the White House Press Corps. Here's Obama, sort of doing that non-apology apology thing!

So there you have it! Obama is "re-calibrating" his remarks according to non-newsmaking/non-controversial parameters.

"The fact that it has garnered so much attention, I think, is a testimony that these are issues that are still very sensitive in America," Obama said.

Anyway, maybe Obama is going to have Skip Gates and James Crowley over to the White House to drink beers and have a teachable moment. The men will hoist glasses, hug, crane shot out to the night sky over Washington, D.C., and that's a wrap for Crash 2: EVERYONE SHOULD SERIOUSLY STOP BEING RACIST RIGHT AWAY OR WE WILL KEEP MAKING THESE TERRIBLE 'CRASH' MOVIES.

OOOOH. And then Robinson said something that you are never allowed to say on the news, ever! "Not every story has two equal sides."

Mika then gave him the big ol' "WTF DID YOU JUST SAY?" face! 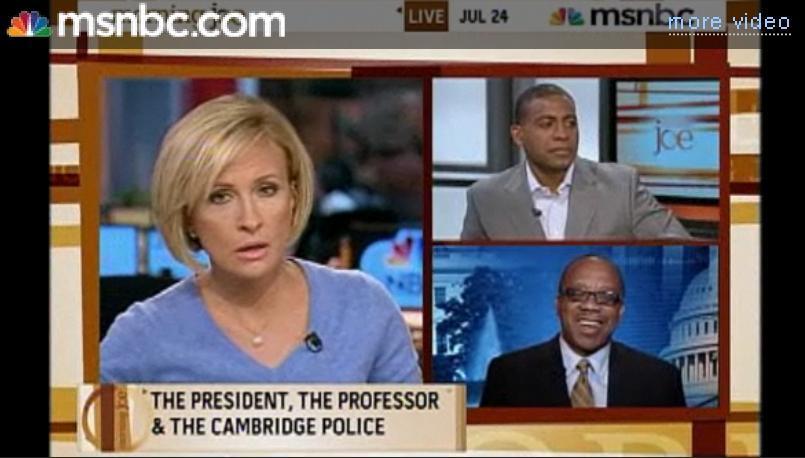 She replied: "I just want to look at both sides. And if you look at the police report, and let's just think outside the box here, and consider this for a second, Sergeant Crowley says, 'I'm Sergeant Crowley from the Cambridge Police, I'm investigating a report of a break-in in progress at this residence' and immediately Gates opened the front door and exclaimed, 'Why? Is it because I am a black man in America?' If that is true, and we question everything, who made it about race first?"

1. That is not, "thinking outside the box." That is crawling inside the box marked "WHAT THE CAMBRIDGE POLICE REPORT READ" to do your thinking.

2. If Gates was inside his house, ready to spring out and make it racial, to whom was Crowley introducing himself?

3. If it turns out, however, that Skip Gates is NOT, in fact, a "a black man in America," Brzezinski is going to look very smart for "questioning everything."

Then Mike Barnicle said, "It's about race now!" about seven hundred times, for no discernible reason. I say, Willie Geist for the win, for smartly saying nothing at all about this.

Anyway, it's up to Henry Louis Gates and James Crowley to reform health care now!