"Morning Joe" contributor Mike Barnicle (who some people I know really like, for some reason, I mean balding white cranks are the most interchangeable goddamn people in punditry, but I digress) is full of fuss and mewl today. Why is that? I mean, why, more than usual, is that? Well, it seems that some mean old emails from despicable consumers of MSNBC's "news" have requested that he maybe should preempt his litany of complaints over the Obama administration's plan to cap the executive salaries of bailout recipients at the paupery sum of $500,000, with the disclosure that his wife is the chief marketing officer and Northeast president of Bank of America, which received TARP funds.

"There's an enormous number of people out there with time on their hands who send me emails saying you've got to come clean because your wife works for Bank of America...I'm not getting divorced over this."

Yeah, because I'm sure that these emails insisted Barnicle get divorced. I think that the intention they had was this: before Barnicle uses Morning Joe as a forum to complain about the income of Wall Street executives getting capped, Barnicle should maybe disclose that his personal family income is at issue. And, also, maybe he should never put your complaints in terms like this:

"You know, it's fun -- it's fun making fun of the banks. It's fun holding them up and saying they can only get -- make 500 grand a year if they're going to take federal money. When are we gonna get around to looking in the mirror? Everyone out there went out and took a second mortgage to buy a big-screen TV or add a deck onto their house because they thought money was free. Nothing's free."

See, first of all, Mike Barnicle almost certainly did not talk to "everyone" about what they did with mortgages or big screen televisions. Indeed, I'd wager he didn't seek out the story of "anyone." But, more to the point, who is this "we" that Barnicle thinks should look in the mirror? When Barnicle looks in the mirror, he sees a man married to a woman who's received the benefits of TARP monies!

Oh, and hey, just because I'm a little sick of the constant categorization of people who righteously and properly criticize the media as lazy shut-ins with "time on their hands," I'd like to personally disabuse Mike Barnicle of this notion. Mike, it takes maybe one or two minutes to offer up an email of polite complaint. Maybe a minute more if you want to get creatively impolite about it. It's an email. It probably takes you more time to struggle with the reading of the email than it does to write it. Those people who send you emails then go right back to their day, working and raising their families. Frankly, even at $500,000, your wife's going to be able to purchase you plenty of "time" for your "hands" -- your soft, uncalloused hands.

Anyway, here is the video. Two-thirds of the way through, Barnicle holds up a sign that reads "My wife works for Bank Of America." I hope that maybe one of you might make him pay for that by sending me Photoshopped versions of that screengrab with the sign altered to read "I eat bags of fricaseed weasel wombs," or "My wife supports the Janjaweed" or something. You know, if you have the TIME ON YOUR HANDS.

We've received some enjoyable screenshot parodies of Barnicle! Thanks to everyone? What flavor Cheeto might I buy you? Edam? Gouda? Whatever you like!

Via Simeon, comes the fulfillment of my suggestion. It took his "hands" only ten minutes! 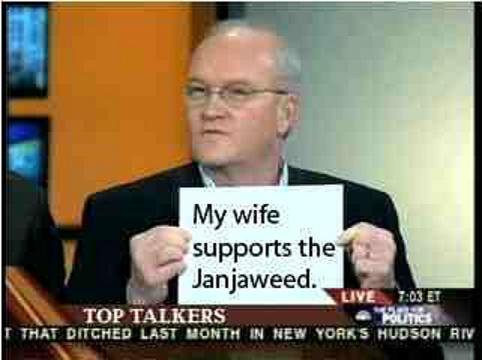 Allison W. examines the feathers of the Barnicle family nest: 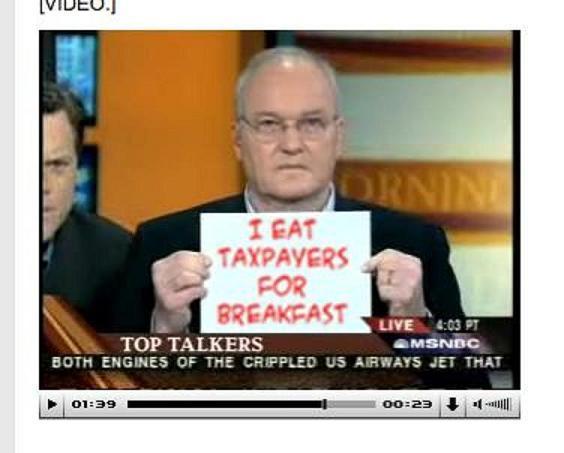 And Jeffrey W. gives us the capper: 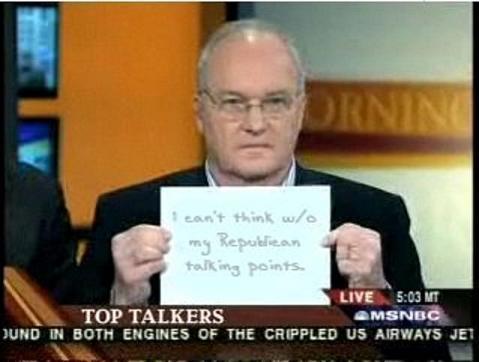