Regardless of your particular tastes in music, it is likely that you are familiar with Mike D or at the very least with the band that made him a household name. The Beastie Boys founder recently sat down with Deepak Chopra to discuss his passion for music, how his career started and what he's doing now. The full discussion is part of NEWSWIRE.FM'S ONE WORLD series and can be viewed here. 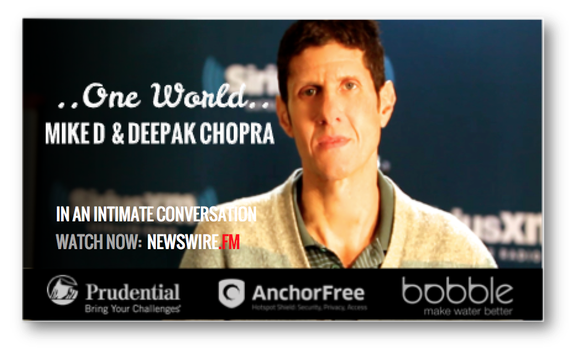 Music was always Mike's passion and even at a young age it was his entire focus. It was that passion for music that, as a teenager, led Mike to the club scene in New York City where he would eventually meet his future bandmates. "It was a funny time because...if you listened to music a lot it was only logical that you would start to play music. Not that we knew how to do it," he recalled to Deepak, it just seemed the logical next step.

With the music came fame which, as for many artists, was a challenge. "There's so much adrenaline, and so much exchanging of energy that you can be very unprotected in that environment," Mike D explained. It's an environment that can lead musicians down a dangerous path and many spiral out of control. But that is not Mike's story. Mike found that yoga was a way to deal with the ups and downs of the music industry. "I was so grateful to be introduced to yoga practices because... that was really a practice of getting comfortable with the uncomfortable." For an artist like Mike D, this was a critical skill; being able to enter the unknown and be comfortable with the risks involved was something that practicing yoga helped with.

Mike D speaks about his success in a very grounded way and does not seem the caricature that so many rock stars seem to become. Today, Mike D is still deeply involved in the music industry in new and different ways. "Now I feel like I'm in this interesting place where I get to actually explore and to try different things." His success has allowed him to work with various bands that he enjoys without fully investing himself as a band member. Mike is involved in the arts in other ways; curating museum exhibits, producing, and working as an activist but music remains his passion.