That's how you spell Mike Duggan's last name, and it's his best strategy for becoming Detroit's next mayor. Nine days after bowing out of Detroit's mayoral race, the former Detroit Medical Center head announced he will mount a write-in campaign for the August primary.

He made the announcement standing next to a giant mock-up of a city ballot.

"We need to educate the voters before they walk into the polls," he said. Voters have to fill in a write-in candidate's name, and fill in an oval next to it. Duggan referenced successful write-in campaigns, and said his campaign was reaching out to Lisa Murkowski, the Alaskan Senator who won her seat as a write-in candidate after losing the Republican primary in 2010.

He made the announcement at a Friday morning press conference in his campaign offices on East Jefferson Avenue, after saying it was the least likely place he expected to be a week ago.

"The emergency manager form of government is unstable," Duggan said Friday. "We've lost a third of City Council since I stood here a week ago."

Duggan said that looking at instability in the city over the last week helped make up his mind He said he didn't believe any other candidates would be as effective at ousting the EM.

Duggan withdrew from the race after losing two challenges to his campaign's legitimacy in Wayne County Circuit Court and the Michigan Court of Appeals. Opponent Tom Barrow, along with activist Robert Davis, argued Duggan, who moved to Detroit from Livonia to run for office, had filed his election paperwork too early to satisfy the City Charter's residency requirement, just short of a year after registering to vote in the city. Although the city clerk and election commission previously certified Duggan for the ballot, both court challenges found that he was in violation of the charter.

And on June 19, Duggan said he was giving up.

"I just don't think it's a viable path to winning," Duggan said concerning his chances were he to launch a write-in campaign. But after supporters publicly clamored for Duggan to stay in the race, Crain's Detroit Business reported the candidate cut short his vacation to meet with campaign staff on Thursday.

"It's going to be harder to do a write-in campaign than it would have been otherwise," he said, "but I'm going to do it anyway."

Legally, a write-in campaign seems to allow Duggan a loophole around the filing snafu that derailed his first campaign.

"I am the world's expert now on filing deadlines for the City Charter," he joked during the conference.

According to state law, write-in candidates must file a Declaration of Intent with the appropriate election official by 4 p.m. on the second Friday before the election. Without filing that declaration, write-in votes don't count. But it appears that filing a Declaration of Intent before the primary could satisfy the city's charter stipulation, which says elected officials must be "a resident and a qualified and registered voter of the City of Detroit for one (1) year at the time of filing for office."

While the write-in campaign offers Duggan a path to victory, it won't be an easy one. He'll have to beat out the field of 18 candidates in the August primary in order to have his name on the ballot in November.

Since Duggan walked away from the race, Detroit voters have moved their support to Wayne County Sheriff Benny Napoleon, according to a new poll.

Main Street Strategies polled 1,383 likely Detroit voters after Duggan's withdrawal for the race, finding that 65 percent of those called said they expect Napoleon will ultimately win the mayor's race (Duggan's write-in candidacy was not an option in this poll).

54 percent of those polled said that Napoleon had their likely vote. Trailing him were former state Rep. Lisa Howze at 15 percent, Tom Barrow at 14 percent, former Detroit corporation counsel Krystal Crittenden with 13 percent and Rep. Fred Durhal (D-Detroit) with 4 percent.

In April, Napoleon was leading Duggan, 39 to 35 percent.

"A majority of Detroit voters are already supporting Napoleon on the eve of absentee ballots appearing in voters' hands," said Main Street Strategies' Joe DiSano in a release. "If anyone is going to emerge as a contender, now is the time."

Mike Duggan Is Back.. But Will Detroit Voters Write In His Name For Mayor?
Detroit Mayoral Candidates Spar At Mackinac Conference 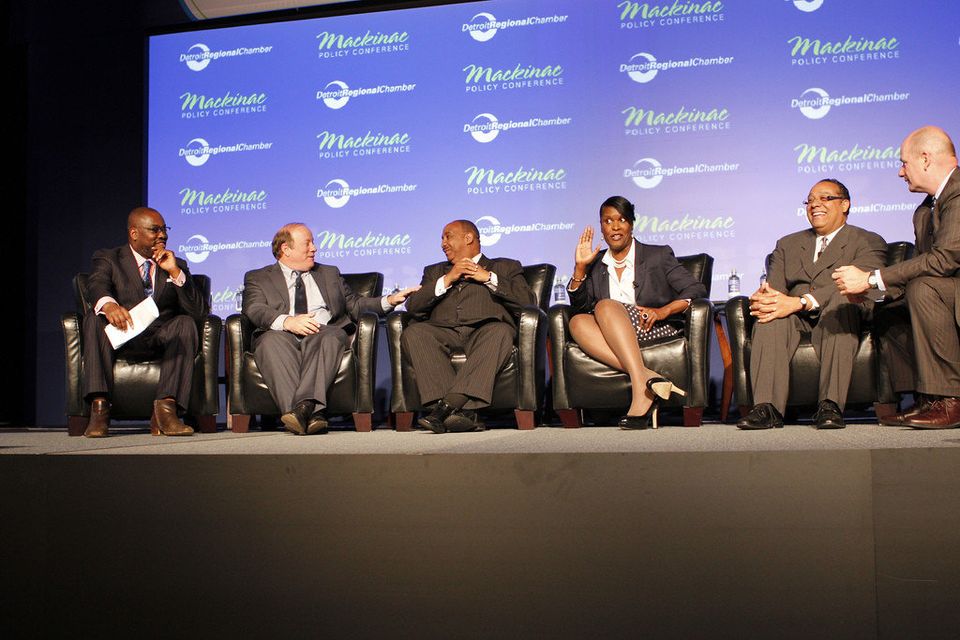 1 / 1
#MPC13 Mayoral Forum
Click through to read Tweets and crucial info from the Detroit mayoral forum held at the Mackinac Policy Conference on Thursday, May 30.
Photo: Courtesy of the Detroit Regional Chamber