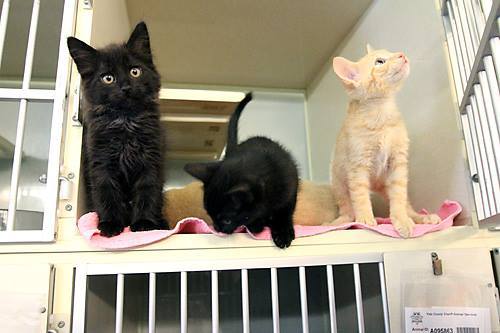 If California Assembly Member Mike Gatto has his way, cats who enter shelters without identification will be immediately taken from their families and given to for-profit companies, including, potentially, companies who sell animals to research labs.

If passed, Gatto's AB 2343 would allow (and in some cases require) shelters to give dogs and cats to for-profit companies to sell for any reason whatsoever. In the case of cats entering shelters without indentification, shelters can adopt them out or give them to individuals who sell them the very moment the cat enters a shelter, the very day that animal becomes lost, and before a family even has the opportunity to recognize that their cat it missing.

How does it do this? Sec. 31752(b)(1)(B) of the proposed bill says that stray cats without identification can be adopted or transferred to a "rescue group" immediately. Subsection (g) then changes the definition of a "rescue group" to include for-profit companies. There is no requirement that the sale be for purposes of companionship. There are no standards of any kind for these for-profit companies. What might they sell animals for? According to one legal analysis, state law may well preempt local laws such that AB 2343 would potentially undo local laws that prevent shelter animals from being sold to research labs.

While Gatto is carrying the bill, it was actually written by a lobbyist for the Humane Society of the United States, Jennifer Fearing. In 2012, when the Governor tried to repeal protections for shelter animals in California in order to avoid paying for them, Fearing told the Sacramento Bee that the law was no longer needed. The attempt to repeal it, however, failed when the Legislature refused to go along with it. Through the Gatto bill, the Governor has allegedly made a commitment of a one-time payment of $10,000,000 in return for relief from future payments. Are they trying to do in 2014 with the one-time promise of cash what they could not do in 2012 by repeal? It sure looks that way.

Nonetheless, to defray criticism of the bill, Fearing claims California law already requires shelters to give animals to for-profit companies, but this isn't true. As it is now written, California law mandates the transfer of animals on death row at shelters only after the holding period (given families an opportunity to reclaim their animal companions) and only to qualified, non-profit organizations. These organizations must have a mission of prevention of cruelty to animals and be receiving shelter animals for purposes of adoption. Such requirements serve important policy considerations. For one, the requirement that they have a mission of animal protection and adoption speaks for itself. Without such a provision, animals could be sold to others for potentially harmful purposes.

Second, the IRS requirement provides oversight by promoting professionalism. For example, they must register with the federal government, and with several state agencies, including the Department of State and Attorney General, as well as requiring that they have an independent Board of Directors. Moreover, experience in California has shown that it results in more individual rescuers incorporating. In fact, statewide surveys in two states found that virtually all rescuers who want to save animals from shelters but are not 501(c)(3) organizations would become so if a similar law were enacted, effectively increasing the professionalism, capacity, and oversight of rescue organizations. This is good for those organizations and it is good for animals.

Under the Fearing/Gatto Bill, the following would also be considered "rescue groups" for purposes of this law and thus have a mandatory right of access: any individual calling himself an "entity" or two or more individuals, whose purpose includes "the sale or placement of any dog/cat." Under the express terms of the language, they could be non-profit or for-profit. There is no requirement that the individuals be licensed, have any sort of corporate status, or have standards of any kind. As written, they do not even have to sell animals to be companions, but can be in the business of selling dogs or cats for any purpose whatsoever. If passed, for the first time, companies which sell animals for any purpose would have rights to animals in California shelters. Moreover, it would give them more rights to cats than the families of those cats. That is not only dead wrong, it is pernicious.

But this is not the only thing wrong with the Fearing/Gatto bill and even if they were to amend this portion of the legislation, it should still be opposed. For one, the bill is badly written and as such, after the one time grant of money, the provisions of the bill would become unenforceable. In other words, after one year, all holding periods would disappear, giving shelters the ability to kill all cats and dogs within minutes of arrival, without ever offering them for adoption, without offering them to rescue groups, without giving their families any time to reclaim them.

At the same time that it empowers people who can sell animals for any purpose and threatens to eliminate all holding periods, it thoroughly divests families of any rights to their cats if the cat enters the shelter without identification--either because the collar was taken off, fell off, a microchip scan failed to find a match or the animal never had one--even though the public funds this service and has a right to expect it. This proposal not only undermines the relationship people have with their animal companions and causes them emotional suffering, but it is also illegal.

As wrong as it is to talk of cats as "property," given their current legal status as such and without the benefits that would come with having other legally guaranteed rights at this time in history, in this limited circumstance, their legal status as property confers a protection where no others currently exist. Consider that unless those cats have identification, Gatto's bill would potentially divest that number of Californians from their cats which the law considers their "property," without due process of law. Given that these animals are often beloved family members, it is naïve to assume that none of those people will step forward to challenge the constitutionality of that law. In fact, it is fair to assume that many of them are likely to do so. (Even if they don't, our legislators should not be in the business of seeking unconstitutional laws.)

Despite its unconstitutional overreach and ethical concerns, Fearing and Gatto are claiming that most cats are not reclaimed and so it will affect few families. But this is dishonest, with 7,818 families annually proving otherwise. It is also based on a flawed understanding of why more cats are not reclaimed. It is not because the cat lacks a family, but because shelters often kill cats before their families can find them. In California, the existing holding period is already far from generous: a paltry 72 hours before animals can be killed. Only one state has a holding period lower than California. The answer here is to increase the holding period, not shorten it.

Second, there are many reasons why cats end up at shelters as strays, but a number of them are not even lost. Frequently, they are taken to the shelter by neighbors or others who assume they are lost when they are not. Once again, these cats are killed because of the inadequate holding period.

Third, low return rates for cats are also caused by misguided lost and found techniques on the part of an uninformed family, because shelter staff are often ignorant of proper techniques to search for lost cats and thus fail to educate families in a manner that will lead to fewer impounds and greater reclaims, because some cats do not enter shelters for several weeks after a family has already stopped looking (fearing the worst), and also because of the failure of shelters to match lost reports with the found cats entering their facilities. The answer to the various reasons as to why more cats are not reclaimed by their families is not to strip families of their rights by eliminating a reclaim period altogether, but by regulating shelters and mandating training so they do a better job. In fact, shelters which do a better job at these things vastly increase their reclaim rates for cats: 22% across all shelters in Colorado (about the same as the dog reclaim rate nationally), and even higher in other North American communities. Fearing and Gatto's proposal not only counters compelling evidence which disproves the perceived "need" for it, but would in fact exacerbate, rather than fix, the causes of the currently low reclaim rates of cats in California shelters.

In other words, the fault for low reclaim rates for cats lies with shelters and both Fearing and Gatto are using the poor performance of those shelters as a reason to undermine protections that people in California have a right to expect of their tax-funded institutions. Finally, regardless of the numbers, that not allowing people any time to reclaim their cats is an obvious threat to the deep and meaningful relationship between people and their cats must be pointed out to groups like HSUS which have grown astronomically wealthy trumpeting the value of the "human-animal bond" adds another layer of absurdity to the already bewildering necessity of this discussion, one based on their astounding assertion that the citizens of California should immediately lose claims to their animals--often cherished family members--should they ever accidentally end up at a shelter they fund in part expressly for such purpose.

To be fair, families with cats should have the same amount of time as families with dogs to reclaim their animals. But if Gatto is intent on reducing cats to second class status, there is a way to do this without breaking up families: allow shelters to place cats in the "constructive care" of non-profit rescue groups immediately, but give families the same right of reclaim for the first 72 hours as if the cats were still in the shelter, with a mechanism for people knowing that their cats are still in the legal custody of the shelter.

While Mike Gatto may be deferring to a lobbyist, ultimately he bears responsibility for any bill he submits in his own name. One has to wonder if he bothered to read it. But no matter, as he is facing reelection, voters in his district who love animals should remember this when they go to the polls.