As you know, the big news on the LGBT-rights front this week is the Obama administration's decision to stand down on defending the constitutionality of the Defense of Marriage Act. The move can be immediately seen as one designed to help shore up President Barack Obama's base en route to his 2012 reelection campaign, and it certainly has. But possible GOP presidential aspirant Mike Huckabee thinks that Obama's move was a mistake. As Suzy Khimm at Mother Jones reports:

On Wednesday, President Obama indicated that he would no longer support the Defense of Marriage Act. When asked about the president's decision, Huckabee laid into Obama for changing his stance after having supported "traditional marriage" during his 2008 campaign:

"The president has made an incredibly, amazing inexplicable political error. He is out of touch with the voters in every state in which this is on the ballot...Had he taken this position in the campaign, he might not have been elected. He supported traditional marriage with a man and woman [in 2008]. Either not being honest then or he's not being honest now. Or he changed his mind, and he needs to explain when and how that happened, and why."

On the matter of how Obama will explain the decision, we've already seen what he plans to do: he'll say he's been "grappling" with the decision and his stance is evolving, and he's likely going to be able to cite plenty of other examples of others who have followed the same path.

I'm prepared to be surprised, but I think Huckabee is vastly overestimating the level of revolt that's likely to happen between the 2008 electorate and the one they'll all face in 2012. Obama has at times wishy-washed his way around issues that are of importance to the LGBT community, but he was never openly hostile to their interests, and, as such, anyone who is objecting now to his change in position represented a sunk cost to Obama in 2008, already.

But most importantly, is refusing to defend DOMA an "inexplicable political error?" Not if you're trying to "win the future," it isn't. 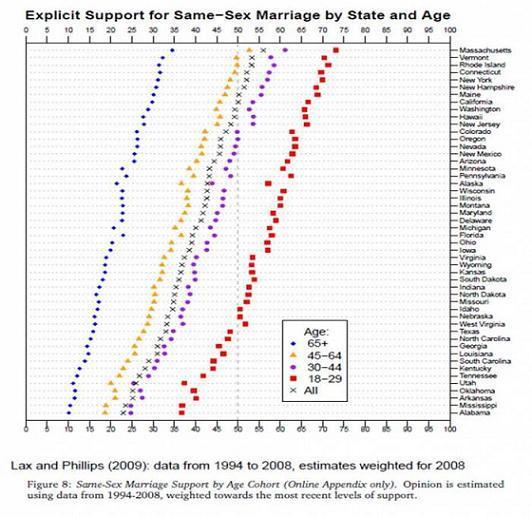 One of the most important things to remember about the issue of same-sex marriage is that its most fervent opponents also happen to be people who will not be spending that much more time living on Earth with the rest of us. And the next generation is going to line up on the support side of this graph in greater numbers than the one that came before it. Like they say: "It gets better."

Republicans are perfectly capable of looking at these numbers and seeing the future, too, and as Sam Stein and I have documented extensively, the right is starting to warm up to the notion of supporting same-sex marriage. I'd wager that the rather muted response from GOP lawmakers over this recent DOMA decision takes these political realities into account, as well.

Huckabee's probably right that in some states, the gay marriage issue could be a wedge that trips Obama up. Again, I don't think that explicit opponents of same-sex marriage who voted in 2008 were inclined to support Obama anyway, so I don't know if it's accurate to suggest that declining to defend DOMA is going to result in a significant number of voters crying betrayal and switching camps. (Wouldn't they have already done so after "don't ask, don't tell" was repealed?) In truth, I think the failure to support same-sex marriage is the thing that's becoming the "inexplicable political error" more and more with each passing day.

That said, I will take slight issue with this from Khimm:

Despite his political attack on Obama, Huckabee laid off from moralizing against homosexuality or gay marriage, both of which he adamantly opposes. And he may choose to avoid that tack during the Republican primary in an attempt to reach out to more libertarian-minded tea party types.

No, no. The Tea Party is not a movement of "libertarian-minded" supporters of LGBT rights, full stop. Let's all disabuse ourselves of that notion. (Nevertheless, the "Tea Party" still represents a sunk cost to Obama in 2012.)