"Experience has taught us that we have only one enduring weapon in our struggle against mental illness: the emotional discovery of the truth about the unique history of our childhood."

- Alice Miller in "The Drama of the Gifted Child"

Looking over Facebook Saturday morning I saw a number of posts about the recently reported death of artist Thomas Kinkade at the age of 54. One post in particular, made by my friend Leonard Koscianski, stood out. It mentioned Kinkade's death alongside that of Mike Kelley, a Los Angeles artist who took his own life at the age of 58 earlier this year.

"First Mike Kelley, now Thomas Kinkade. Two California artists who were very popular in their respective milieu. I'm saddened by their deaths, but I disliked both of their work."

It was stimulating to read Leonard's comment, which I agreed with. I also disliked the work of both artists: they represented aesthetic extremes that I couldn't connect with. How odd to think of them connected in any way, even by early death. I first came across Mike Kelley when I saw him perform "The Sublime" -- an uncomfortable 2 hour recitation -- at MOCA's "Temporary Contemporary" in the Spring of 1984. A few years later I saw my first Thomas Kinkade billboard looming over the 10 freeway just west of Palm Springs. Both men were somehow of my world, and my generation, but from vastly different sections of it.

Kinkade was an extrovert whose mass produced faux-paintings -- actually giclée prints on canvas which paid assistants have often kicked up a notch with hand painted touches of impasto -- have the gleam and glitter of fairy-tales. He was the self-proclaimed "Painter of Light," an evangelical Christian, and a mass marketing genius. Thomas Kinkade was the Boomer Poet Laureate of kitsch Americana.

Kelley was an introvert saw repression as the enemy of sanity. He sought out and even embraced life's darkness; a Poet Apostate who criticized "normative" values, systems of authority and consumer culture. As critics have pointed out his early use of stuffed animals was intended to "drive a wedge between sentimentality and childhood." His savage critiques appealed to the jaded appetites of some of the art world's leading collectors.

Kinkade and Kelley were the yin and yang of American art, one favored by conservative "red" America, the other by "blue." Kinkade's work was sold in shopping malls, at the Disney Store and on eBay, while Kelley's was shown in elite galleries and contemporary art museums.

Yet, despite their differences, they both had a deep interest in the same subject matter: the revisiting of their childhood traumas as portrayed in the image of "home."

Before his death by apparent suicide in early February, Kelley was working on "Mobile Homeland," an installation that was intended to recreate his childhood home in Detroit. In his final interview Kelley told Tulsa Kinney of Artillery Magazine that the subject was ..." almost too fraught with psychology and dysfunction...things that could easily feel like an emotional burden."

Home, as seen through a child's eyes, was a subject that Kelley had dealt with before. In his 1995 installation "We Communicate," Kelley wrote texts for a set of children's paintings that commented on the psychological underpinnings of each image. One of his commentaries says quite a bit about what he thought a painted image of a house could communicate:

"The house is a crudely scrawled heap surrounded by dark messy slashes of color. The surrounding shading produces an atmosphere that screams with anxiety. No German Expressionist has depicted the black torture of the soul better. Although Elaine is obviously an unhappy child, she is, at least, able to express this state of mind openly and need not hide behind the mask of socialization. She need not pretend to be a 'good girl.' The adult world of rules and order, symbolized by the house, is sinking back into an infantile fecal mound that Elaine has the capacity to control."

Clearly, what Kelley had to say about the child's way of coping -- she was in control because she didn't repress or pretend -- is also an manifesto of his own social and personal ethos. "His subversive critique," wrote George Melrod after Kelley's death, "was not just aimed outward toward society at large, but seemingly inward at himself." 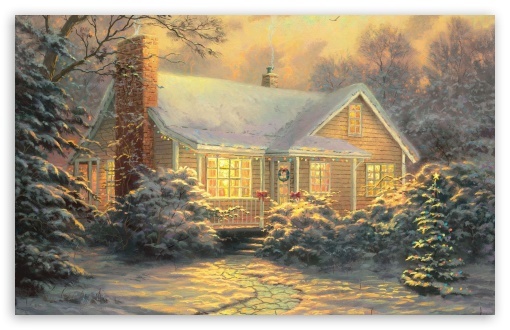 "The Christmas Cottage" by Thomas Kinkade

By contrast, one of Kinkade's signature images, "The Christmas Cottage," is a sentimentalized image of the artist's childhood home; Kinkade reportedly launched his artistic career to save it after he learned that his mother could no longer afford the mortgage. It has been stated that one in twenty homes in America is decorated with some kind of Kinkade print. You have to wonder: How many homes had "The Christmas Cottage" hanging over the fireplace when Countrywide posted the foreclosure papers on the front door?

The cottage, which glows as if it had swallowed the Star of Bethlehem, exudes a luminescent fairy tale vibe that Kinkade used as his shield against his life's disappointments. By painting fairy tales, Kinkade was attempting to achieve what Bruno Bettelheim posited was a "... happy outcome, which the child cannot imagine on his own." Kelley would have called Kinkade's approach "denial." Indeed, Kinkade expertly sugar-coated the subject matter of every one of his mass-reproduced images. No wonder one critic called them "visual Prozac."

Kinkade reportedly died of "natural causes," which I assume is a sugar-coating of the actual factors; an autopsy is planned. The artist's public outbursts -- he once reportedly urinated on a Winnie the Pooh figure at the Disneyland Hotel in Anaheim while saying "This one's for you, Walt." -- and his 2010 arrest for drunk driving suggest that the man's demons were doing everything they could to burst out.

Kelley, by potentially taking his own life, was characteristically honest. His apparent suicide was his admission of unhappiness, a problem that he had discussed openly in his key works. At the time of his death Kelley was reportedly depressed after a breakup with his girlfriend.

Mike Kelley died "critically acclaimed." Thomas Kinkade died "popular." As Leonard Koscianski pointed out on Facebook, they both had their constituencies. They both had considerable public and financial success. 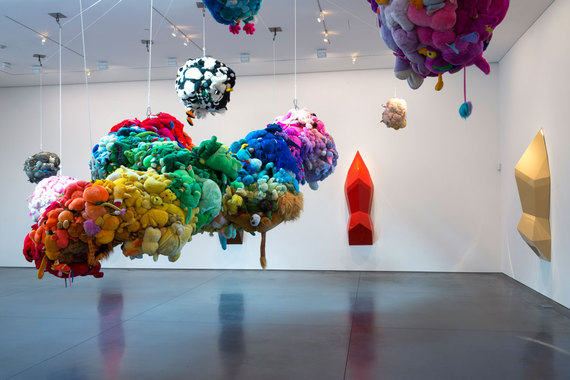 "Mike Kelley," comments Leonard Koscianski, "made very high priced works that ridiculed middle class sentiment. His works were so expensive that they could never be owned by the middle class he disparaged." His hanging mixed-media installation, "Deodorized Central Mass with Satellites," sold at auction for just over $2.7 million dollars in 2006. Kelley, who had once addressed cultural consumerism with a fetishistic phallic candle display called "The Wages of Sin" was represented, at the time of his death, by the world's most powerful contemporary art dealer, Larry Gagosian.

Kinkade's art and the product line that grew from it was so successful that his art company was publicly traded on the New York Stock Exchange, and at one point had a market capitalization of $350 million (the total value of the stock) based on annual sales of $250 million. Kinkade, who described the art world as "a very small pond... a very inbred pond," left behind a net worth that is in dispute. One source says "$70 million" another says the artist, who had faced lawsuits by the owners of Kinkade gallery franchises, died "piss-poor." At the time of his death, Kinkade and his wife Nanette had been separated for more than a year.

Kelley's bracingly strange and searchingly intellectual art appealed to America's 1%. Kincade's hyper-sentimentalism and his sanitized subject matter -- Christ, baseball, and fairytale cottages -- made him the favorite artist of America's 99%. They were two American artists who, in their striking divergence, tell the story of a nation whose center seems ready to tear apart. Stress makes people look for extreme solutions, both in life and art.

Ultimately, both men seem to have suffered in catering to the almost schizophrenically divided tastes of American society. In public they both maintained powerful identities -- a bad boy and a good boy -- while in private each one got a bit lost trying to find his way "home" to private peace and reconciliation with his childhood experiences. It might be said -- in psychoanalytic terms -- that both Kelley and Kinkade ultimately failed to sublimate their impulses and idealizations into workable connections with the world. Both men had empty centers that they couldn't quite fill.

Let's hope, for Kinkade's sake, that he is safely at home in Heaven. It would have to be a light-filled, cotton candy heaven where a compassionate Christ is present. In Kelley's case, it is tougher to speculate on where his final home might be and who might comfort him. When Tulsa Kinney asked Kelley, during his final interview, if he ever believed in Heaven and Hell, he responded plainly:

"No. I never believed in anything."