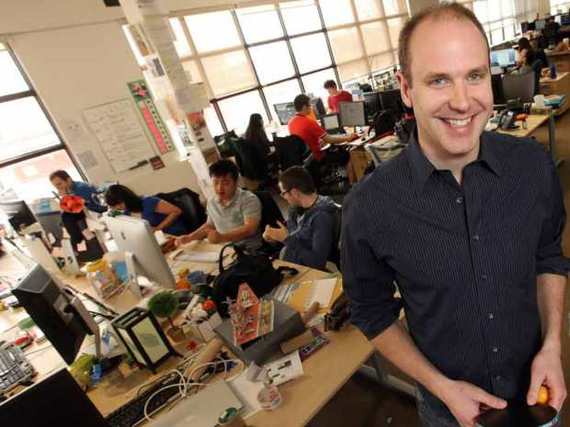 So why do you build a product? Do you do it for money, fame, bragging rights?

In the case of Mike McDerment, CEO of FreshBooks, you do it because you see there is a problem with the current convention.

When McDerment led a four-person design agency, in 2003, invoicing was a painful process. Instead, of pulling his hair out, Mike decided to find a better solution.

So McDerment, Joe and Levi decided to build an invoicing system.

The two-year side project was upgraded to Mike’s parents basement and for the next 3.5 years the co-founders worked and built FreshBooks.

Building a product is a long journey. It’s marred by failure, financial ruin and in most cases massive competition.

So why would anyone ever take on such odds? In Mike’s case, it was not only a passion for serving others, but he loved working with his team.

That passion and love have turned FreshBooks from a piece of software built in a basement to a cloud service that helps over 5 million customers get paid.

What do you value most about your company's culture and vision?

We've invested a lot over the years into creating a culture of supportiveness and collaboration. It's in the DNA of FreshBookers to go to great lengths to execute extraordinary experiences every day for our customers and for each other.

Without a doubt, the most important thing we've done to build the foundation is to hire for cultural fit, hiring only people who share our core values.

And from there, it's not something we just talk about; it's something we live. Every single FreshBooker spends their first month on customer support – no exceptions. Everyone gets the opportunity to have close contact with our customers, learn their stories, and help them solve problems.

And that connection to the customer keeps us going and keeps us on the right track.

In the first 18 months of the company's life, we were making maybe $100 a month and working out of my parents' basement. Every indication was that we were failing miserably, and being patient was hard for me.

Being an entrepreneur is in my blood, and unless there's a lot going on, I'll create problems to solve. I remember thinking that we should just pull the plug and start working on another idea I had, and then I looked over at my co-founder Levi, who was busy programming and bobbing his head to some tunes, totally loving what we were doing.

This is a guy who's 10 times as smart as me. I knew if I were to ask him how things were going, he'd say, "Mike, we signed up 23 people today, that's awesome, right?" That kind of positivity kept me going.

I've said it a thousand times before and I'm sure I'll say it again, but I wouldn't have made it through without my co-founders Joe and Levi. I think their positivity and encouragement helped me through the tough patches.

Entrepreneurial Tip: Change your standard by surrounding yourself with people that not only inspire but are smarter than you.

How long are you willing to fail at a job before you succeed?

Failure is a funny thing to define, and there is certainly no black and white with what success and failure look like. I can tell you that over the years, we've done a lot of things that conventional wisdom says you shouldn't.

We took the business to the internet when most accounting software was being bought off the retail shelf, taking on the big, entrenched players in the market who everyone thought would crush us.

We didn't take on venture capital for more than 10 years because we wanted to establish our way of doing things, and not be influenced unduly till we were ready. We were early believers in customer service – we spent a lot of time and energy and money on it – which made no sense to folks back then, looking at things only through the lens of a spreadsheet.

These were all things that could have indicated failure to some, but we didn't ascribe to external measures of progress – we stuck to our guns and were persistent with how we wanted to build the business. I'm a big believer in persistence and focus, and if you're prepared to push hard when others won't, you'll make it through to the other side.

So in my opinion, failure is when you stop evolving and growing, and you're closed – otherwise, it's all learning and no failing.

Entrepreneurial Tip: Failure is never the end of the story – it’s a course correction. And for those that understand that; progress is all but guaranteed.

Tell me about your last project. Who was involved and what was the biggest challenge?

I'm not an armchair leader. I want and need to be in the game with my team, getting my hands dirty with challenges. This means I spend time with different teams at critical turns in the road, in whatever capacity needed.

Presently, I'm our interim CFO, helping the finance team dig deeper. I've also been working closely with a recently restructured PR team trying to redefine what communications should look like for FreshBooks.

The big challenges for the team being that they were facing a lot of unknowns and the way was not clear. This is the kind of opportunity I thrive on and I get my energy from the sense of adventure that comes finding a path through the dark, and helping others evolve through the process so they become leaders and better problem solvers.

Entrepreneurial Tip: The boss commands you to do what needs to be done. A leader jumps into the pit with you and asks, “how can I help?”

Tell me about a project or accomplishment that you consider to be the most significant in your career.

As a founder turned CEO, my ability to grow personally directly affects the company's ability to grow, so I've spent a lot of time learning about leadership, learning to be a leader.

I've really come to grasp the importance of leadership that builds other leaders. I'm nowhere near done, not even close, but I think I've broken through a few walls in the last couple years and this feels significant in a personal way.

It's not easy and it's never ending, but I think I'm slowing inching my way in the direction I want to go.

Entrepreneurial Tip: The most important asset in your company is you. Always keep in mind that your journey is not done.

Tell me about a time you realized you had the power to do something meaningful.

This has been a bit of an evolution. The first realization in the early days that we were on to something was seeing the impact we were having on customers.

I remember, years back, being on the phone with a customer, and he told me that FreshBooks had changed his behavior. It was so simple and easy to use that he was now invoicing his clients faster and more often, and in turn, getting paid faster.

This was positively impacting his business' cash flow. This actually became one of the core value propositions for the company – helping customers get paid faster – and we've been fortunate enough to help millions of people with this.

The second realization came out of building a company from my hometown, Toronto – recognizing that we will build a world-class technology company headquartered here and that that is a great way to give back to the community that has given me so much. It's something to be proud of.

Entrepreneurial Tip: To really make a dent in the universe you need to give back more than what you take.

One of the most important lessons from this interview is the importance of company culture.

I have worked at many companies and even help start a few. While smart, savvy and driven people are, lynch pins. The progress of a company sits deeply within its culture.

I am not sure if Mike knew it at the time but those seeds of a good company culture where being planted in his parents basement. McDerment, Joe and Levi not only enjoyed working together but worked as a team to push through many walls.

As the company progressed, Mike never forgot how good culture allowed him to overcome many failures. And stopped him from nearly giving up on FreshBooks.

McDerment continues that philosophy today by making certain that each person hired is a cultural fit.

I would sacrifice smarts for company culture.

A company with good culture can have many benefits – financial, moral and more importantly being able to manage better the quality of the customer experience.