Confronted by reporters, Parry owned up to the Obama post and tried to explain himself -- but he didn't admit to writing, "what's with Dems and Pedophiles?" after the passing of the Matthew Shepard Act.

"My opinion is that our president is arrogant and angry. The fact is that he is a black man," Parry said. "Now if the Democratic Party and the liberals want to take my opinion and the fact and mix it together and use it to bring a bad light about me and keep them away from discussing the real issues they can do that all they want. They're grasping for straws." 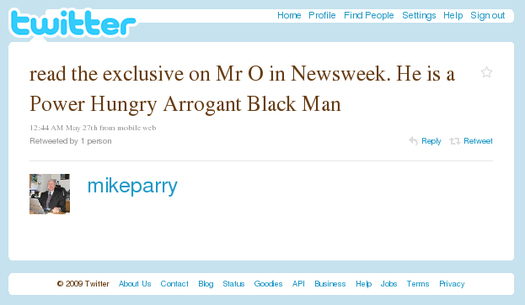 On the pedophile comment, he at first said he didn't know how the comment could have gotten on his Twitter account. But he later added, "As I recollect, I would have to have read something that would have created me making a statement like that."

Parry also said he doesn't even know how to erase a tweet.

Upon winning the Republican endorsement, Parry said he would be "a senator that is not worried about being politically correct."