If you've watched Comedy Central's "Broad City" -- side note, if you haven't seen it, stop everything and get on Hulu right now -- you've likely been hypnotized by the trippy animations that ring in each episode.

Like the show itself, the hand-drawn intros are colorful, weird, and grotesque in the best ways possible. One animation takes the form of a pimple popping, revealing a kaleidoscopic geyser of neon. Another begins with a lone nipple, growing ever more juicy until it dominates the frame. There are fingers poking into belly buttons and letters puking up other letters in candy colors. For all this animated brilliance, we have artist Mike Perry to thank.

Perry, born and raised in Kansas City, Missouri, currently works in Crown Heights, Brooklyn. His studio is as colorful as your wildest dreams would imagine, filled with paintings of naked ladies with tangerine colored bushes and wooden carvings of fluffy monsters delivering a spanking. Eyeballs, geometric forms and acrobatic sexual encounters stretch throughout the bright space, creating a vibe somewhere between the bawdy absurdity of "Broad City" and the sleekness of graphic design on spring break.

On one fine afternoon, we got the chance to hang out with Perry and learn more about his artistic practice. We chatted about all things "Broad City" and not, including how young, working artists make a living off their ever-itching creativity in the world today. Perry delivered the real talk, explaining how he met the BC ladies, how a night in jail helped his artistic career and why John Singer Sargent makes the most delicious art.

Above is a short video that gives a glimpse into Perryland. Check out our entire interview below.

How would you describe what you do here?

What do I do all day? I make colorful adventures. I'm inspired by the possibilities of creativity, bound by no limitations and optimistically hope for the ability to create for the rest of my life. So, I guess that's what I do.

There is not really a typical day in this environment. The reality of working for yourself is... I like to think of Spiderman -- with great power, comes great responsibility. I have this insane amount of freedom. I can do whatever I want to do, everyday. But the reality is you have to put the work in and time in and dedicate your existence to doing this. 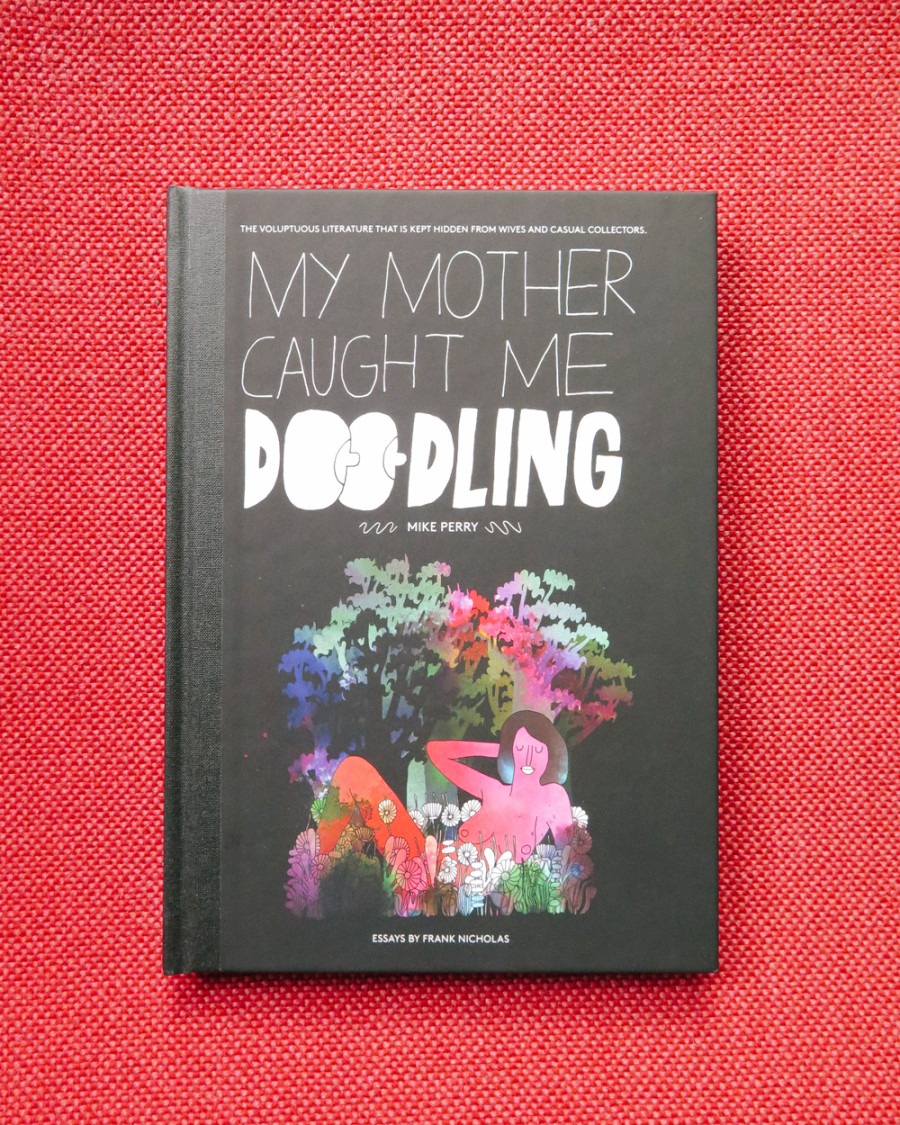 So when did you first start drawing?

I was one of those kids that everyone knew just sat in the class and didn't really participate except for putting what was in my head on a piece of paper. I always knew it was awesome and I knew I liked to do it but I didn't grasp what it was. But there was this great moment in, I think it was third grade, when this kid Frederick showed up. I didn't know who he was or where he came from -- I don't know if his name was even really Frederick. In the painted story of my memory his name is Frederick, and he could draw Ninja Turtles and pirates like nobody's business.

He'd use his sister's trashy novels and draw flip books in them and I was like -- I didn't know you could do this! It was crazy. I was 13, I was kind of getting into trouble. I spent a night in jail and had to rearrange my life after that. It got super dark in there. I was looking at a list of all the names carved in the stool and I started to recognize the people and I was like, I gotta get out of here, man. I have to change my life. From that, I became super nerdy and grew my hair out super long and had a sad beard and wore mushroom necklaces and played lots of Dungeons & Dragons. It was awesome. I had permission to just be a nerd and not participate in social norms.

Also, when I was 16 my grandfather, who was a painter, gave me a tackle box of oil paints and I just made hundreds of paintings. Every time I was putting a stroke down I was like, this is insane that this is happening, that I can do this! It's like a fire, you just can't put it out. 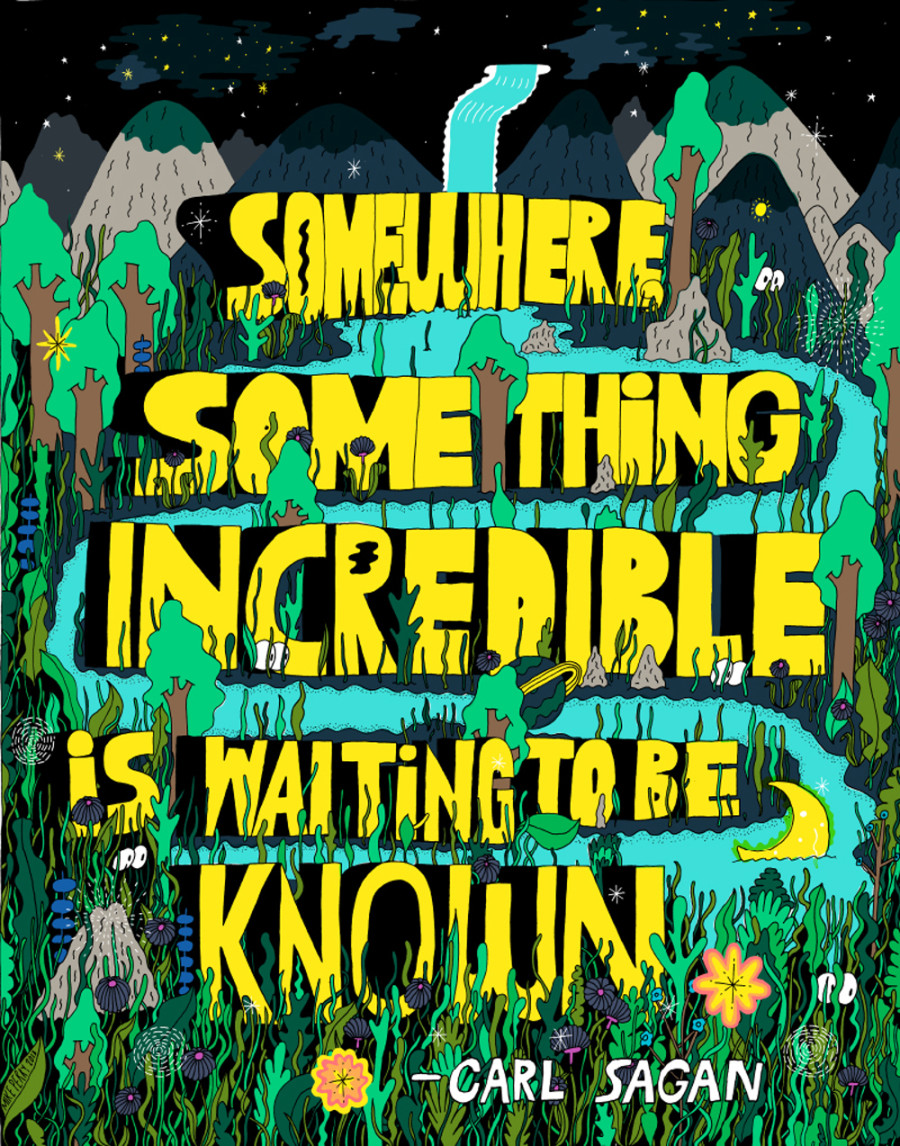 Was there ever a time that you considered a different, maybe more logical path than pursuing art?

No. I always knew that this was the path. And I think there's a lot of power that comes with knowing you don't have any other options. It's all in.

What is a recent project that you're excited about?

I've been doing a lot of nude work. I have a book coming out called My Mother Caught Me Doodling which is basically a journey into me drawing the female form. I realized that figure drawing is one of the things I really missed from school. I was in the studio here, and using social media I reached out to the world and said, "Hey, I'm looking for models. Would anyone want to be drawn?" The response was so awesome, I instantly turned it into a thing. The first time it was me and another artist, Josh Cochran. We did the drawings. We had a good time. It was really fun, way more experiential than I thought it would be.

We did the first round and it did really well, we had an exhibition, we sold a bunch of drawings. About a year later another opportunity came to do a pop-up exhibition and I thought -- oh, let's just do this nudes thing again! We had eight artists that time, and we did 900 drawings. It's this energetic moment of time that comes together where you have artists making drawings in a very loose, freeing kind of way. But you also have people exposing themselves and telling their stories. So you get this sort of weird community of people that are all together, invested in this idea of fresh drawings. Since then we've done it three other times. It's become this wonderfully exciting project that I'll get to do for the rest of my life.

You've been successful at translating high end artwork into things that are accessible and approachable. Is this something that's important to you?

Graphic design was presented to me in the most beautiful optimistic way as the opportunity to make anything. It's problem solving. What am I trying to make and how do I go backwards to do this thing? Having that beat into me opened up the possibilities of sharing and communication. It's about making people happy on a larger scale. I like products, I like making things, I like practical things. I just made a vase with this Belgian company called Case Studios. And it's like, it's a piece of art and I believe in it and it's amazing and it's a beautiful object to me, but it's still a vase. I want people to use it. I think it would be almost a disappointment if someone bought it and didn't put flowers in it. Because that's what it is. 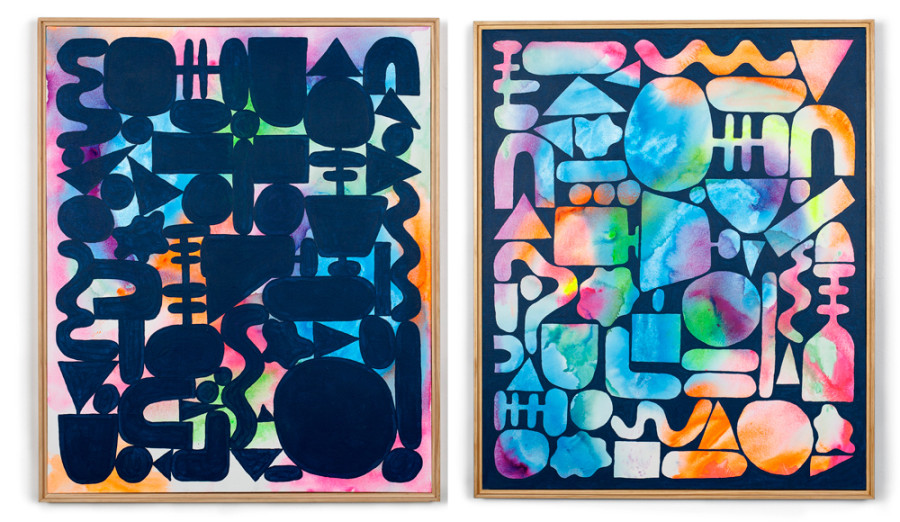 Have you had any particularly odd jobs or odd requests?

Do you have any tips for breaking out of a creative rut?

The only time I really feel like I'm in a rut is when [I'm in] a toxic environment that feels unhealthy. For me it's about trying to stay positive and stay productive. I don't necessarily have to be making something every second. There is still a business that I have to run and there are still correspondences I have to have with the world. For me it's about taking the time to figure out the things in your life that you need to help you figure out how you can make the work that you need to make, you know?

For instance, this studio is really important to me. It's my safe place where I get to do my work and be myself. I don't have to worry about anything. I can turn the music up as loud as I want to. Now that I'm here I realize that's what I've been trying to do -- build my safe place where I can make the work. I just think it's important to try to stay healthy and positive and hope for the best. I know I'm a happy person -- when things go wrong I try to roll with it. That's my chemical makeup so, I'm pretty lucky.

What is the scariest part about being an artist?

To me, the scariest part about being an artist is the possibility of not being able to make anything. But I don't necessarily think I'd need my arms to keep on making of stuff. The scariest thing would be if my brain stops working. Losing my arms would be a bummer, but I think I could still participate in what I'm making. It's scary that this is all I do, this is who I am. 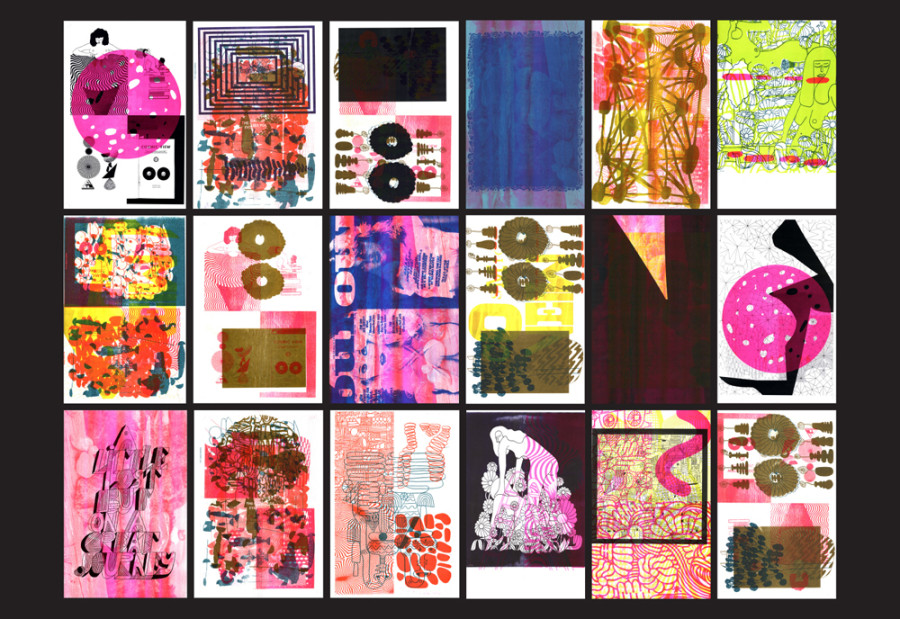 If you could rewrite the definition of an artist, how would it read?

To me, being an artist is about a lifestyle. It's about a decision and a dedication to making the things that you believe in. To me, that's the most important thing. I like to see when people have put everything on the line for it, that they believe so much in what they're doing. It makes me feel speechless, the fact that somebody will glue thousands of things to another thing to make this larger thing that nobody else will really ever understand -- it's spiritual, it's craziness. That's what I think of when I think about artists. It's the desire to see it all the way. 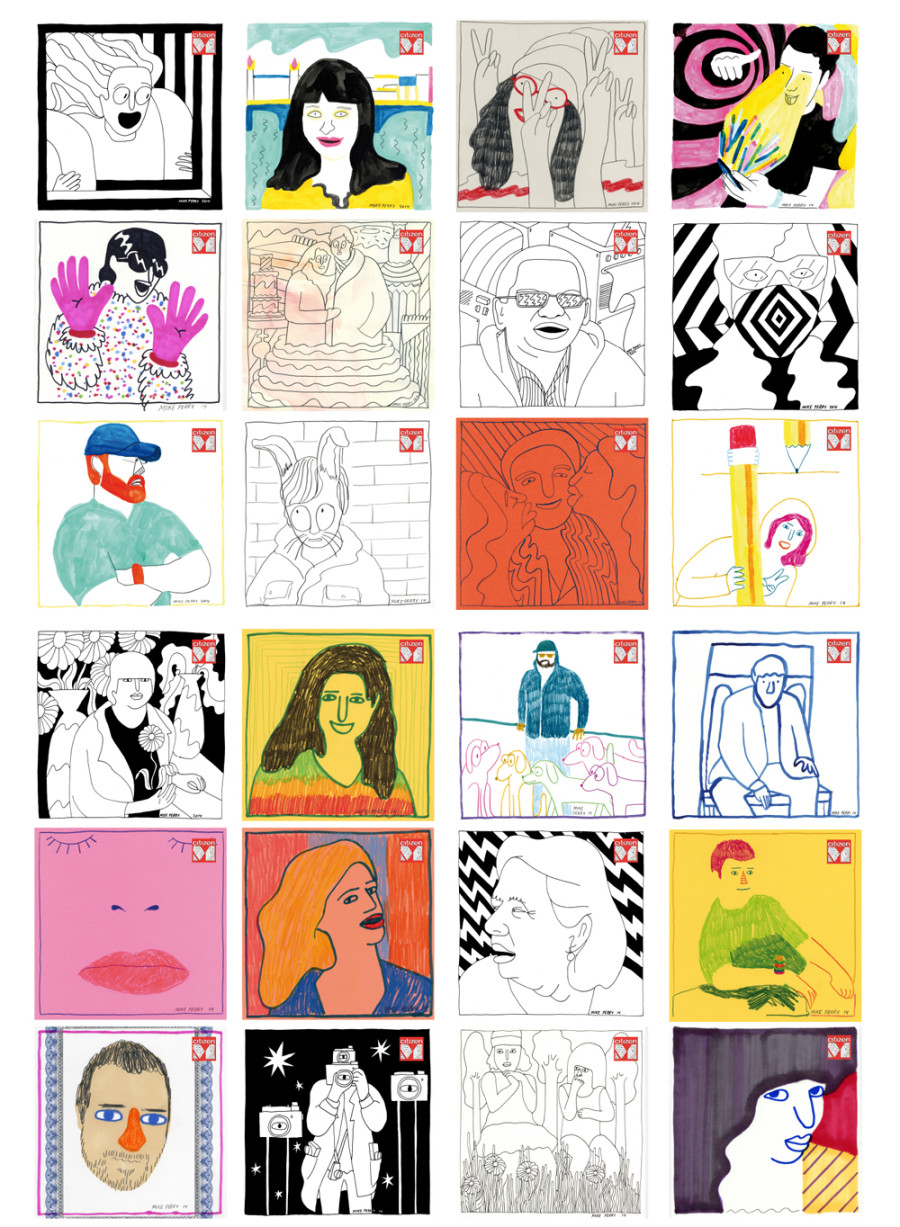 If you could be alone with any piece of art in the world, what would it be and what would you do?

I don't know what piece but I would definitely touch it, a lot. I did have a phase when I was in college where I was trying to touch paintings. It felt really good. I try not to do it anymore. It just feels so much better. You get all the oils. Oh yeah. The only time in my life I really thought about this, I was really into John Singer Sargent, who is probably the most influential artist in my path, which doesn't visually make any sense. But those paintings are so edible, so delicious. You can just see the freedom of him making these paintings. There looks like there is no effort to them and that's, like, insane to me. It would also be nice to go up to a Calder and just go PAM! and see it spin out of control. That would be super sick.

Any advice for aspiring artists?

Recycle! What's that song? "Don't Stop Believin'!" Just go for it. To me, the more of us that do this the more power we have.

This interview, which has been edited and condensed, is part of The Huffington Post's "In Plain Sight" series, a collection of conversations that aims to shine a light on the lives of professional artists. 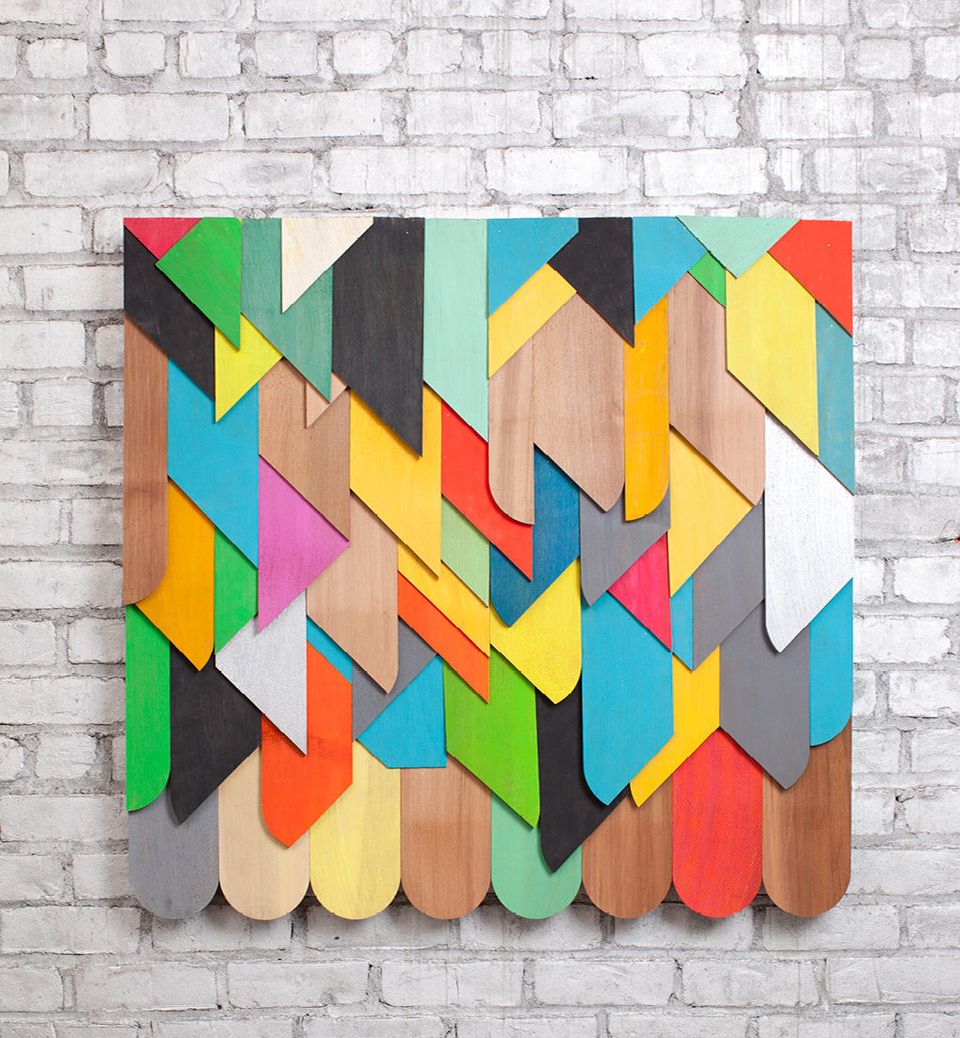