Her hips certainly do not lie.

Mikel Ruffinelli, 39, a 420-pound woman with an eight-foot circumference, set the new world record for World's Largest Hips, according to the World Record Academy.

The mother of four, of Los Angeles, Calif., stands at just five-foot-four, has a proportionally small 40-inch waist, and is completely content with her shape, the Daily Mail reported.

"I see no reason to diet because I don’t have health problems," Mikel said. "Men don’t fancy skinny girls, they like an hourglass figure."

Ruffinelli's husband, Reggie Brooks, and she have been married for 10 years. "She had a sweet disposition about her that really attracted me to her," Brooks told Barcroft TV. "I like to tell people all the time, 'I have a license to work with heavy equipment,'"

Still, Ruffinelli's 100-inch wide hips makes everyday tasks difficult. According to the World Record Academy, the plus-size model must drive a truck and use a reinforced chair at home to accomodate her frame. She also struggles with fitting through door entrances and sleeps in a 7-foot-wide bed, Closer reported.

Ruffinelli first began gaining weight when she was 22, after having her first child.

"I put it down to my pregnancies," she said. "I don’t see why else the weight would go to my hips, although, I do eat lots." "Lots" includes nearly 3,000 calories a day.

"In the past, I was self-conscious about my hips," Ruffinelli said. "As I got older, I learned to love my body and now I’m not afraid to show it off." 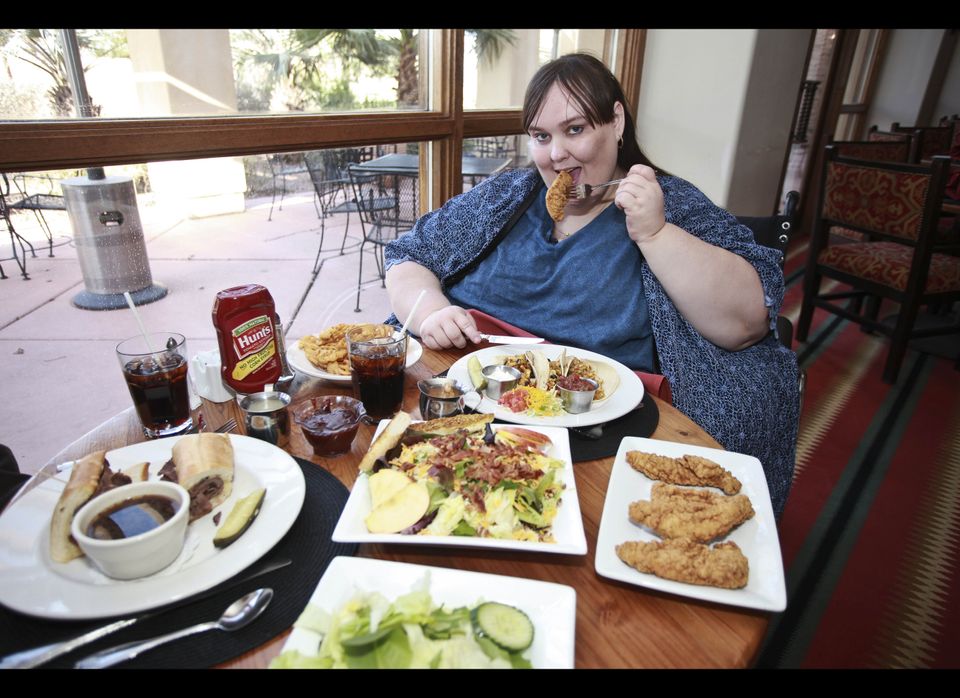 1 / 10
World's Fattest Woman Gets Engaged To A Chef
Susanne Eman - the woman bidding to become fattest in the world - is celebrating after becoming engaged to a Chef. Susanne, 33, enjoys her dinner at a local restaurant on March 08, 2012 in Casa Grande, Arizona. (Photo credit: Laurentiu Garofeanu/Barcroft USA)
(Photo credit: Laurentiu Garofeanu/Barcroft USA)