The rain didn't stop during the Opening Ceremony of the 30th Athens Classic Marathon.

However, the Tomb of Marathon was full. Citizens, athletes, even some politicians were there for Him.

The symbol of resistance against the Greek dictatorship was there to hold the torch. When Mikis Theodorakis took the flame, many of the guests cried.

Despite his age (he is 87 years old) Mikis Theodorakis attended a ceremony that not only is a sports event but also an event with historic reference.

His presence was more important that ever. Greek people have lost faith. This financial crisis has led many of them to despair.

This year the Opening Ceremony was totally different. Marathon racers know how to fight, run the 42 kilometers, follow the steps of Phidippides and enter the Panathenaic Stadium. That is what Greek citizens should do and win despite the difficulties.

Mikis Theodorakis fought against junta and became a symbol and a legend.

That is what Greek people should do. Follow his steps and fight for their future.

Everybody who attended this ceremony insisted that Greece will survive.

Paco Borao, the President of AIMS (Association of International Marathons and Distance Races), said that Greeks know how to fight and this time will manage to survive.

Besides, the Marathon race is Greek and Greeks always finish it and transmit the message to the whole world. 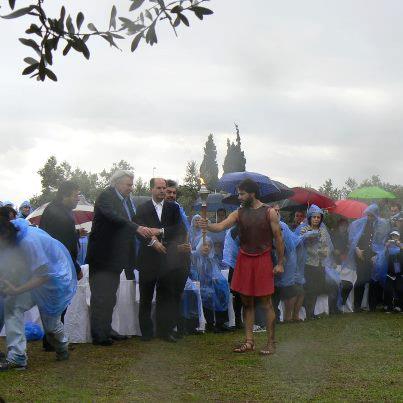