As if you weren't well aware that her upcoming film, "Friends with Benefits," deals expressly with the sexual side of male-female relationships, Mila Kunis is giving an eye-opening reminder on the cover of this month's GQ.

It may not be by mistake that she forgot her pants on the way to the shoot.

But Kunis is far more than just a pretty face (and body), as she points out in the accompanying interview. A star since she was the hilariously bratty teenager Jackie on "That 70's Show," Kunis has impressive comedic chops, too, and laments that it is so often difficult for women to be taken seriously when it comes to funny in Hollywood.

Citing "Bridesmaids" as an example of a film that showcases just how funny women can be, Kunis says, "You have no idea how hard it is for a woman in this business. A lot of people don't even think women are funny. It's f*cked-up, but you have to deal with guys like that. I've learned to roll with it."

Article continued below the photo 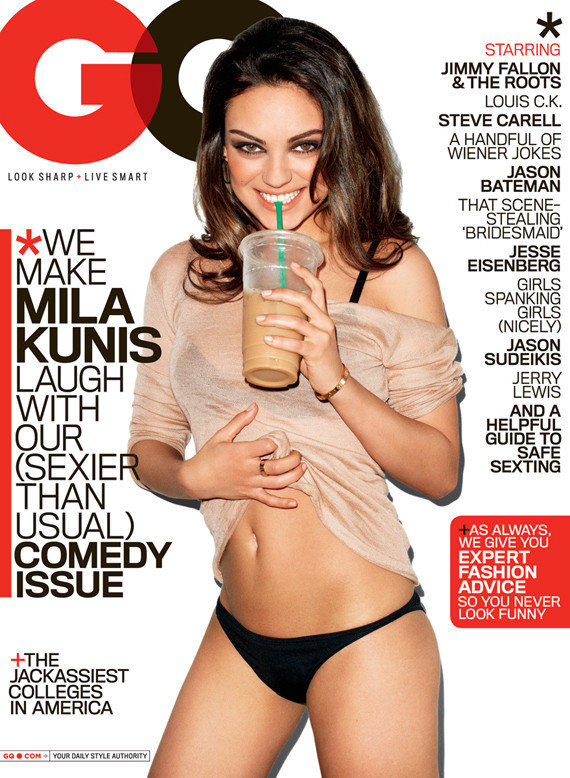 Luckily for her, she's had plenty of opportunities to show off her ample humor skill-set; she's a longtime voice on the cartoon "Family Guy," and stars in "Ted," a bizarre romantic comedy written and directed by that show's creator, Seth MacFarlane. She's earned every opportunity, but given her looks, it's still a battle to beat back against stereotypes, as she notes that, "people just take you as that: attractive. People aren't getting the opportunity to move beyond being attractive."

She expressed similar sentiment when doing the rounds for her rom-com, "Extract," last year, telling About.com about women in LA, "You have one that solely relies on their looks. And that's fine if that's what they have to get through life, so be it. And then you have the beautiful women that actually have something else to offer the world and are constantly fighting against the stereotype."

Hope may be on the way, though, given the summer's plethora of successful lady comedies. Cameron Diaz's "Bad Teacher," in which she plays an unapologetically craven and raunchy derelict of a teacher has been a surprising box office success, beating expectations each week. And then, of course, is the "Bridesmaids" factor.

The most successful R-rated female comedy, "Bridesmaids," as Kunis noted, was lauded for its nonstop laughs, not just its all-women ensemble cast. Co-written by and starring Kristen Wiig, the movie was a true message that women can lead with laughter in Hollywood (or, a reminder after Lucille Ball established the precedent so many years before).

"I've been thinking a lot recently, in talking about the movie, and it occurs to me that yeah, there have not been as many female ensemble comedies as there have been guys," Ellie Kemper, one of the film's stars, told The Huffington Post in an interview back in May. "But also, not many as there has been in television. It hasn't quite made the leap to the big screen. That's what so exciting to be part of, in addition to it being an extremely funny movie, you recognize its not as common to be in or to see a movie that is drive by female leads."

There are a lot more photos, comedy and geekery where that came from on the pages of GQ -- click over to their site to read the rest.