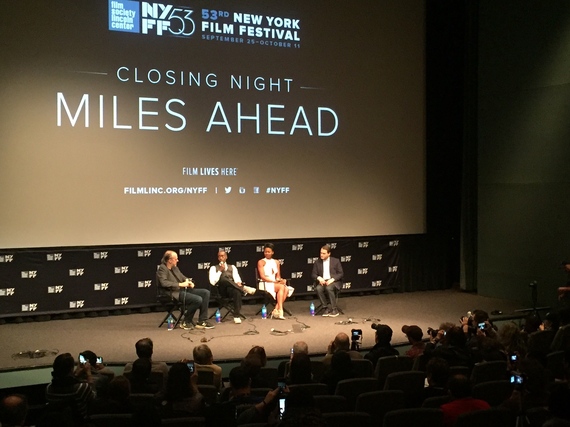 That's the theme of actor/writer/director Don Cheadle's drama Miles Ahead. If you're looking for a conventional bio-film, you'll be disappointed. If you want to get inside the head of the ingenious, erratic, enigmatic high priest of jazz, fasten your seat belt and enjoy the ride. This Closing Night film for the 2015 New York Film Festival is jazzed.

The screenplay by Don Cheadle and Steven Baigelman (Get on Up, the James Brown bio) doesn't pretend to put the life of Miles Dewey Davis III in order. You won't learn where or when he was born (Alton, Illinois, May 26, 1926), how he grew up, when he starting playing the trumpet, how he became a professional, how many wives he had (three, including Cicely Tyson), how many Grammys he won (9), when he had a cameo on TV's Miami Vice, why he had a fierce rivalry with Wynton Marsalis, how and when he died (brain aneurysm at age 65 in September 28, 1991), where he died (Santa Monica, CA) or where he was laid to rest (Woodlawn Cemetery, Bronx New York). For this info you'll have to read Miles: The Autobiography, or wait for a more traditional film.

It's the 1970s. There's a knock on the door of Miles Davis' (Don Cheadle) New York townhouse. It's a white, longhaired dude named Dave Brill (Ewan McGregor) who swears he's a writer from Rolling Stone. Davis wants no part of him, but through happenstance the scribe gets in. The two bond, and have a testy relationship, which includes the feisty musician pulling a gun on the journalist. Meanwhile Davis is on the phone with the executives at Columbia Records asking about a $20,000 check. They won't release the money until he sends them his latest session tape. He won't budge.

Davis enlists the aide of Brill, who he puts behind the steering wheel of his Jaguar. They head over to Columbia, where the diminutive musician brandishes his revolver and walks out with just $400, cash. Brill is astonished. In an effort to help the jittery musician calm his nerves, the writer takes him to a student's dorm at Columbia University to buy cocaine. That score appeases the strung-out, spacey Davis, whose mind wanders in an out to past times, chiefly remembrances of Frances Taylor (Emayatzy Corinealdi, Middle of Nowhere), a dancer he fell in love with, married and abused.

Brill's final brush with Davis involves a caper, where the two try to retrieve his stolen session tape from a smarmy manager (Michael Stuhlbarg, Trumbo) who has been trying to push his protégé (Keith Stanfield, Straight Outta Compton) on Davis. The guys are eventually pursued by the manager's security guard, and get involved in a car chase and on-the-run gunfight as they flee. Shots fired on the dark streets of New York.

Cheadle's job as the filmmaker, with this graphic glimpse of Miles, is to render the essence of the man. As a director he does just that. His scattered approach to storytelling, with detours, tangents and flashbacks, is the way the mind of a drug addict or mentally ill person works. Davis looks at the cover of an album and thinks back to the woman he loved. He steps into a room that takes him back to another memory when he made an entrance. Cheadle's strategy makes sense, even when his filmmaking hits some clunky moments.

Scenes melt into each other that are not chronological. Often the most apparent indicator that a time lapse has occurred is dress and appearance: Davis with a large Afro, humongous sunglasses and natty loud clothes, it's the '70s. When his head is shorn neatly, he's in a sleek suit and playing a very controlled jazz melody with the precision of a music professor, it's the'50s or '60s. By the end of the movie, your mind will be that rattled.

Thanks to Cheadle, strong performances abound: lead roles, supporting roles and extras. Everyone with a SAG card gets the space to show his or her craft. McGregor is fine as Brill a shyster along for the wild ride. Emayatzy Corinealdi, who was disarmingly beautiful and sinuous in Middle of Nowhere, is still extremely photogenic and summons deep emotions that allow her to play Frances the graceful dancer, reluctant fiancée, dutiful wife and wronged/outraged spouse.

Those performances are crowned by Cheadle's star turn as Davis: The strange behavior, neurotic artist bent ("Don't call my music jazz, it's social music"), macho swagger ("You are my wife, your place is with me."), anger and the need to be respected. He was never an easy man and Cheadle reconnects audiences to his bravura and introduces them to the drugged out and creative block malaise he experienced around 1975. Watching the scrawny Cheadle limp around, displaying the hip degeneration that Davis' suffered, but still strutting like a lion, and brandishing a gun is disturbing but so nonchalantly Miles.

Cleverly most buildings are shot in close-ups, but one can tell that it's highly likely that the streets of wherever are substituting for the avenues of NYC. Cinematographer Roberto Schaefer (Quantum of Solace) and editors John Axelrad (Crazy Heart) and Kayla Emter (The Immigrant) are great at disguising the venue, shooting interiors and giving the 1h 40min length a rhythm that works. The incessant cuts, edits and flashbacks are purposeful. The musical score caresses scenes or accentuates them, thanks to composers Robert Glasper and the legendary Herbie Hancock, who actually played with Miles.

The opening credits start with an interview with the edgy, put upon Davis. It's as if Cheadle is summoning the man's ghost. The final credits roll and there is Cheadle as Miles playing his trumpet with a backup band that includes Hancock and blues musician Gary Clark. Never, when Cheadle is playing his horn, do you think he is not in full command of his instrument. His fingers are graceful, relaxed and it seems like he's producing a sweet sound.

This is a snippet of a life that descended into a black hole in the 1970s, after Davis had risen to stardom in the '50s and '60s. When you walk away from this movie you will understand his mindset and emotional state, even if you don't have a full picture of his life. That was Cheadle's plan. In the process he has exhibited some remarkable, personal filmmaking, a unique style that's as unexpected as the music Miles Davis played.

It is a credit to the New York Film Festival that they understood the artistry of this film and made it their Closing Night offering. Don Cheadle has introduced the world to one of the most celebrated jazz musicians of all time. He did his job.