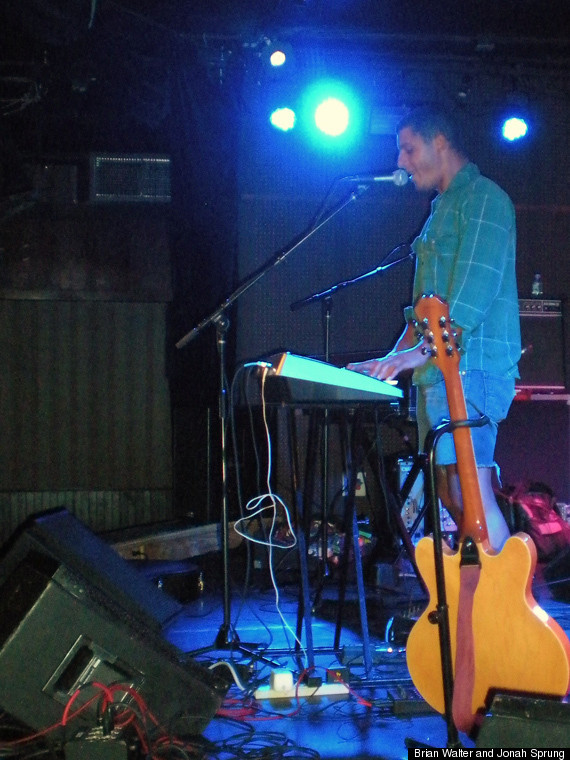 Today's indie music scene is in many ways a dangerous place. What can from the outside seem like a utopian community of DIY artists and innovator friendly venues is in often actually a cut-throat business. Take Miles Benjamin Anthony Robinson, for example, a twenty-seven year old Brooklyn-based musician who plays a kind of beautifully broken folk-rock. In 2008 he was riding a wave of blogosphere hype, heralded as the 'next big thing' by sources all across the interwebs. This led to the release of two albums and a national tour. Two years and one bad review later, he is singing to a near-empty Knitting Factory, a gig he didn't even try to promote because, in his own words, "I don't give a fuck."

After missing our last show due to a train miscalculation, we made sure to show up at the Knitting Factory in Brooklyn at 8 PM, right when the show was supposed to begin. Expecting at least a moderate crowd, we were surprised to be literally the only people present. About seven people drifted in and sat at the small bar on the show floor as Miles Benjamin Anthony Robinson began setting up his equipment alone. When he first started strumming his Epiphone hollow body, it wasn't clear if it was a sound check or his first song. About a minute in we figured out he was playing "Shake a Shot", the lead track from his most recent album Summer of Fear. He continued to play through his set without once pausing to look up at the audience, which may have been a good thing, as the venue bar (separated from the show floor by a sound-proof window) was clearly filled with at least three times the amount of people in the crowd.

He nonchalantly moved from song to song, barely saying a word in between. It at first seemed like he was ashamed of the small crowd, but it became clear after a few songs that he genuinely didn't care. This did not mean that he poured out his soul for all ten of us, but rather that he had planned on a show of semi-ironic self indulgence regardless of how many people showed up. Not to say that his set was bad; far from it. While his songs never built to the kind of gloriously loud and depressing climaxes they reach on his albums, they still carried weight, and he played with a detached sincerity that was all the more impressive in light of the circumstances.

INTERVIEW
The following are excerpts from our conversation with Miles Benjamin Anthony Robinson.

Brian and Jonah are both errant college DJs from suburban New Jersey.