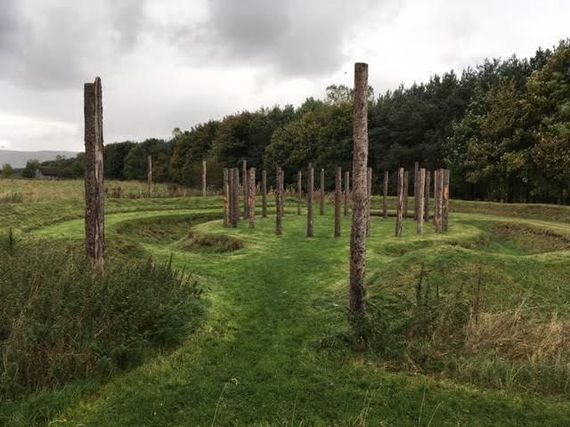 Five miles northwest of Wooler, in northern England, stands the striking reconstruction of an ancient monument, representing what must once have been a common site across the surrounding plain. Adjacent to the remains of an old World War Two training airfield of the same name, Milfield Henge makes for an atmospheric centrepiece on the Maelmin Heritage Trail. Walking among its timber uprights is like stepping back into a time shrouded in mystery.

Surrounded by the lonely Cheviot Hills, the entire Milfield Plain was once a hive of prehistoric activity. The name of the heritage trail itself, Maelmin, reportedly derives from a royal township that existed near the modern day village of Milfield during Anglo-Saxon times. But the history of this corner of the Northumberland National Park goes back much further. The Maelmin settlement replaced the earlier residence of Edwin of Northumbria, Ad-Gefrin, at nearby Yeavering. Towering above, the twin-peaked hill known as Yeavering Bell is home to the ruins of a Votadini hill fort.

Down on the plain, henges were common during the Bronze Age and perhaps even as far back as Neolithic times. The haunting reproduction seen here is based on the Milfield North Henge, which was situated some distance away across the abandoned wartime airfield. There are said to be at least seven ruined henges across the Till Valley. One of them endures beneath a cultivated field across the main road, less than 100m from where these photos were taken, though no visible traces remain on the surface. 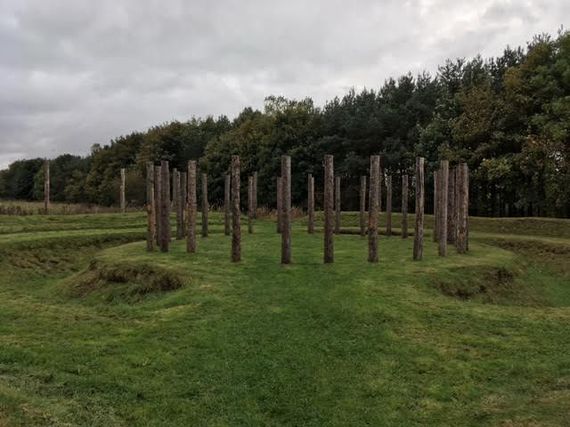 Milfield North Henge was excavated back in the 1970s. Radiocarbon dating placed its origins at around 2,300 BC during the early Bronze Age. Like many ancient monuments, however, it was used and reused by advancing cultures as the centuries unfolded, and evidence suggests that later farming communities on the plain buried their dead at the site thousands of years after it was first built.

According to Maelmin Heritage Trail: "In the central area of the henge were three pits, the middle one of which contained a food vessel pot and possibly a wooden coffin for a burial. The other two pits were also thought to be grave pits but the acid nature of the soil has meant that bones do not survive."

The sign-board adds: "The stone-lined grave, or "cist", situated inside the entrance to the inner sanctum was probably a threshold deposit - deliberately positioned so that any individual entering would have to walk over the grave. Nearly 3,000 years later the henge was reused for burial of the dead by the Anglo-Saxons."

Henges were earthworks that began to emerge during the Neolithic period and sometimes, though not always, contained stone circles, timber circles or coves. Similarly, not all circle monuments were built within henges, although Britain's three largest stone circles - Avebury, Stanton Drew and the Ring of Brodgar - are all henge monuments.

Like other ancient monuments, the precise purpose of Milfield North Henge, with its outer earthen mound and inner ditch, remains uncertain, but it may have been used for ceremonial purposes. Further, historians aren't entirely sure how the timber uprights would have looked, and specifically whether the outer ring was connected to the inner posts by wooden lintels. 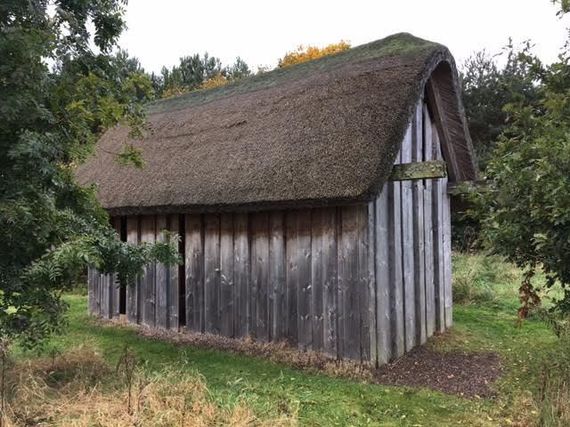 The reconstructed Milfield Henge now stands on a fascinating heritage trail that guides visitors through thousands of years of history from the Mesolithic to the Bronze Age and beyond. The trail includes the ruins of a Mesolithic hut and a Dark Age house which, like the henge, has been faithfully reconstructed based on archaeological evidence.

Visitors to the site are aided by information boards placed at intervals around the heritage trail, and additional information is available from the village information point. The presence of the abandoned wartime airfield, the site of which is now home to recreational gliders, adds an extra dimension to the storied history of Milfield Plain, a 20th ruin at the heart of an ancient landscape that remains alive with activity to this day.

This article was first published on Urban Ghosts.

Founder of Urban Ghosts, an online magazine about hidden history and offbeat travel