When the redoubtable Joe Landini, invites you, Young Unknown Choreographer, to create a full-length ballet and show it off at The Garage, home to cutting-edge Bay Area dance-makers, it takes a lot of nerve to pick Vivaldi's "Four Seasons," possibly the most overexposed, clichéd, rearranged piece of music in the Western canon.

Milissa Payne Bradley obviously has nerve to spare, as she not only went with the Vivaldi but also crammed in more dancers per square foot than have probably ever been seen before on a San Francisco stage, even the postage-stamp-sized stage at The Garage. Displaying exquisite taste, she chose Max Richter's daring minimalist "recomposition" of the Seasons and, like Richter, she demonstrates that classicism is timeless, that a work born of disciplined classical technique and a soaring imagination can look fresh, modern and hip.

The Vivaldi is a kind of pattern-based music. It almost reminds me a little of systems music, minimal music from the '60s and '70s ... It's material we know, it's part of our musical landscape... [This recomposition] is my way of having a conversation with Vivaldi... I went through it, picking my favorite bits and turning those up and making new objects out of those... like a sculptor, having fantastic raw material and putting it together in a way which pleased me... The piece is pretty radical -- I've probably thrown away three-quarters of the notes -- but I've kept the gestures and the shapes and the textures and the dynamics. -- Max Richter

And so Payne Bradley's new suite of dances entitled Up in the Air appear to be her way of having a conversation with legendary, long dead choreographers -- in particular Frederick Ashton, Anthony Tudor and Jerome Robbins -- and with Max Richter. She freely reorders his fragments of music, envisions them as brooding solos, sensuous duets and ritualistic ensemble pieces, puts them on pointe or in soft ballet slippers or brightly colored socks, drives them down down down into the floor, or floats them up into the silvery grey clouds of the sublime backdrop painted by artist Seán Patrick McArdle.

She speaks the language of classical ballet with fluency and a modern accent. There is also an elegance, a very American chic. Much of her vocabulary is traditional but her sentence construction and punctuation is delightfully quirky and offbeat -- the e.e. cummings of ballet -- she throws in accents over sections of uninflected music, changes dynamics unexpectedly, and finishes phrases with startling, eloquent gestures, as when Megan Wright ends a mournful solo by brushing off her thigh before settling down to sleep. There is a spareness to Payne Bradley's work unlike much of contemporary ballet, a sense that movement has been edited out, leaving contemplative spaces, whispered yearnings, sorrows hinted at, accusations withheld.

Her movement has a sculptural quality, with lyrical transitions into sharp lines, expressive upper bodies, the arms, head and shoulders radiating generosity, nobility and openness. The ensemble moves in complex, tight, architectural interweavings, they splinter off then regroup but mostly remain onstage, watching each other impassively (well, there was really nowhere else for them to go except out on the street or behind the backdrop, this being The Garage and not The Opera House). 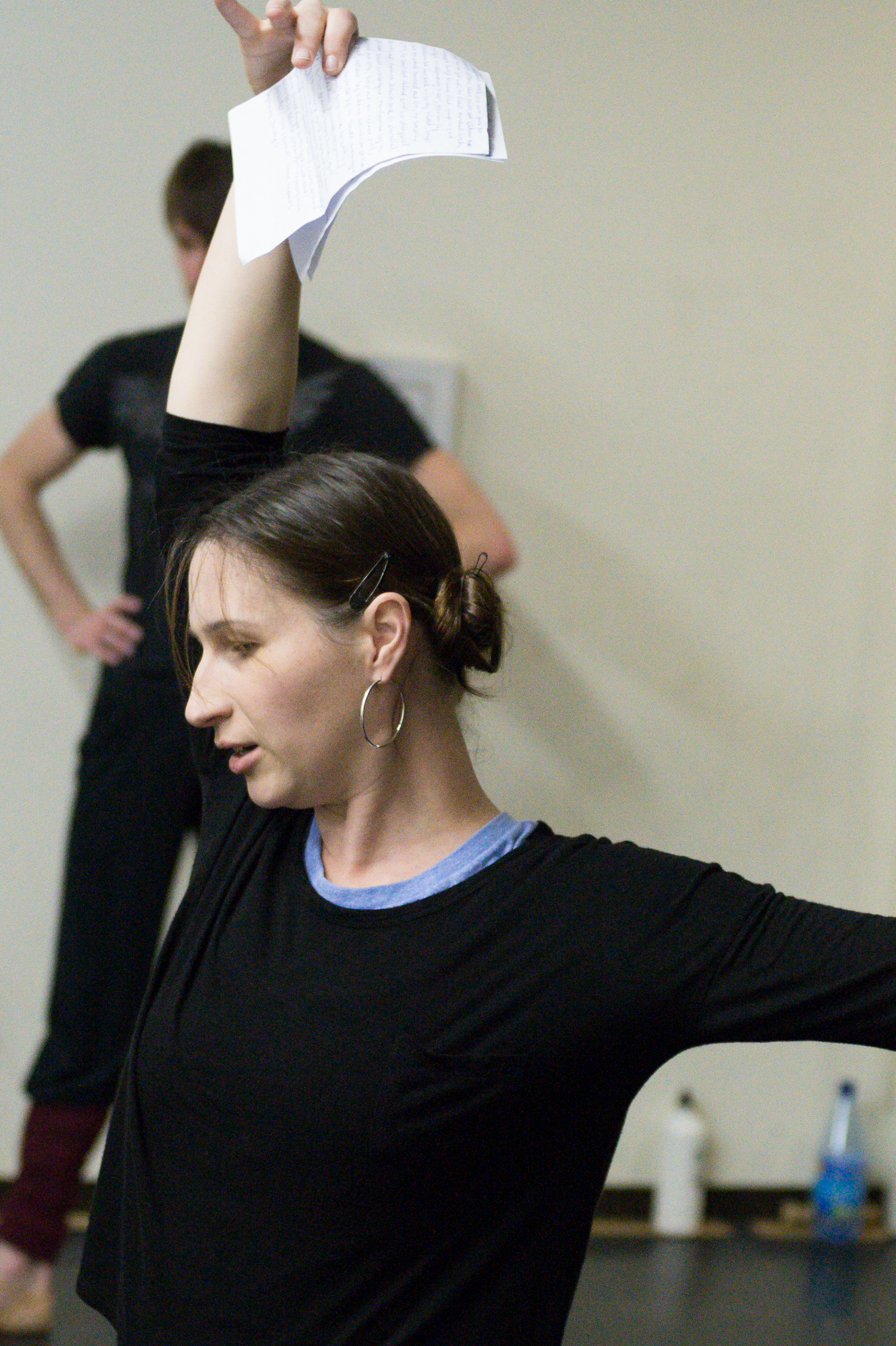 Up in the Air -- like Payne Bradley's previous work, Athena, set to Ravel's "Pavane for a Dead Princess" -- contains layers of mystery. When the slow movement of "Summer" opens, Damon Mahoney and the glamorous Rachel Speidel Little advance solemnly like a king and queen in procession, resolutely avoiding each other's gaze, their joined hands tracing ballroom dance patterns to an ominous pulsating bass line punctuated by Daniel Hope's yearning violin solo. A series of soaring lifts ends with her stretched as if in flight, balanced precariously on the back of his bowed neck. Are they marking the disintegration of an intimate relationship that could not stand up to a life spent in the public eye?

There is also plenty of humor and wit -- as in the playful pas de trois set to the third movement of "Spring." The trio of girls flit across the floor in light and airy classical piqués, then all of a sudden break into a series of rapid-fire step-ball-changes in the style of the Road Runner. In the whimsical third movement of "Autumn," Vivian Aragon and Jackie Goneconti Gibbons affect a studied boredom as they flounce and strut and hip-check each other. Payne Bradley wisely lets the individual personality of each of her dancers shine through, and yet dancing in unison they are stunningly coherent. 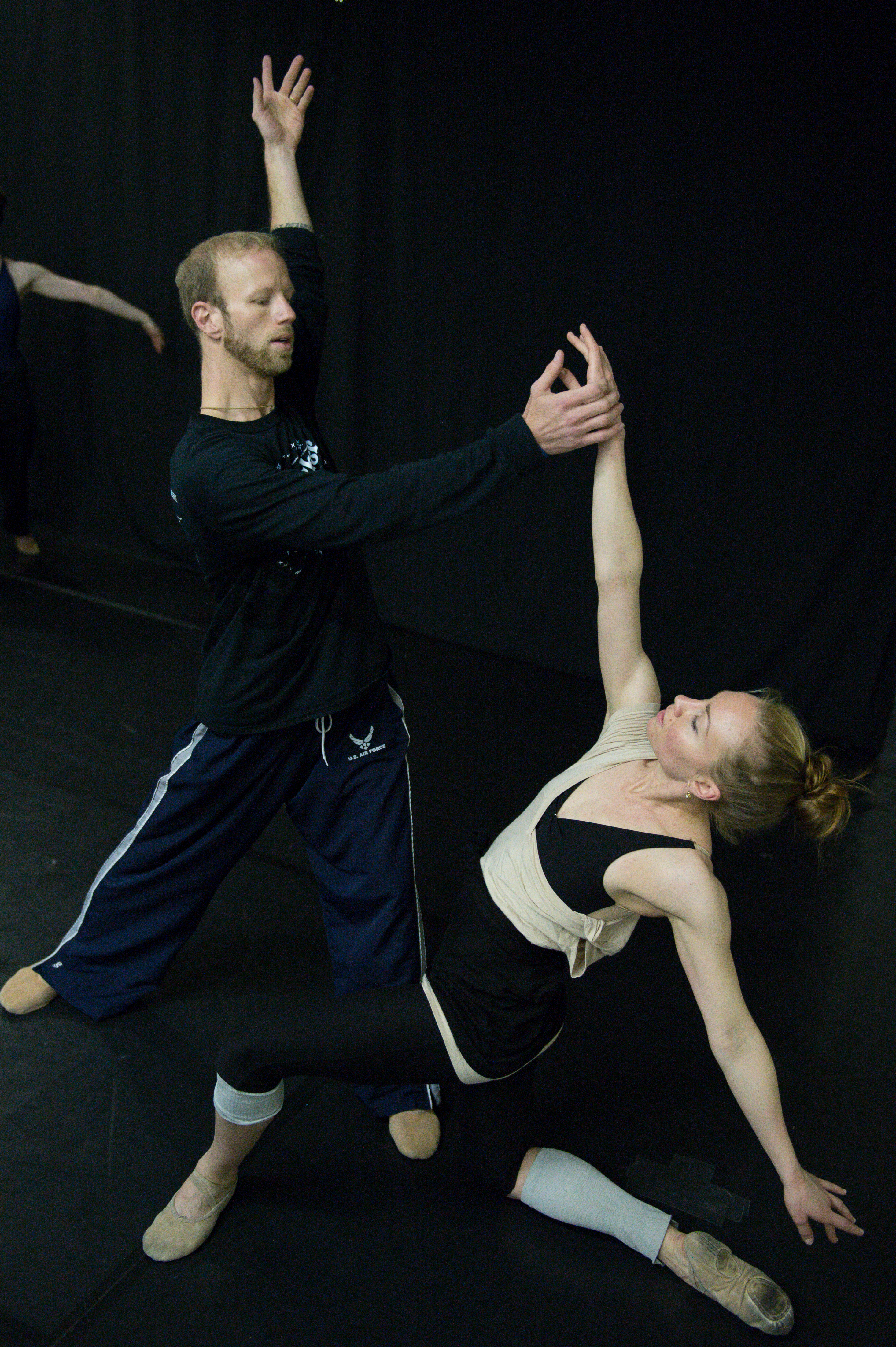 Jamielyn Duggan and Bryan Ketron in rehearsal for 'Up in the Air.' (Photo: David DeSilva, courtesy the Milissa Payne Project.)

Besides the many contemporary references in this work -- to ballroom dance, Fosse jazz, hip hop, and modern release technique -- there is more than a passing nod to Igor Stravinsky and Vaslav Nijinsky's controversial Rite of Spring, the centennial of which is being marked this year by dance companies around the world. In the final section of Up in the Air, set to the chill winds that swirl through Richter's final fragment of "Winter," 14 of the 15 dancers turn their backs on the audience and on tiny, defenseless Vivian Aragon, abandoning her like the Chosen One who must be sacrificed in Nijinsky's Rite in order to ensure the arrival of Spring. Out from the ensemble steps the stern, statuesque Marlowe Bassett, like Nijinsky's Wise Elder meant to drive Aragon to her death (or behind that all-purpose backcloth). The ensemble comes together in concentric circles that mirror the circular formation at the opening of the piece, reminding us that a year has passed. 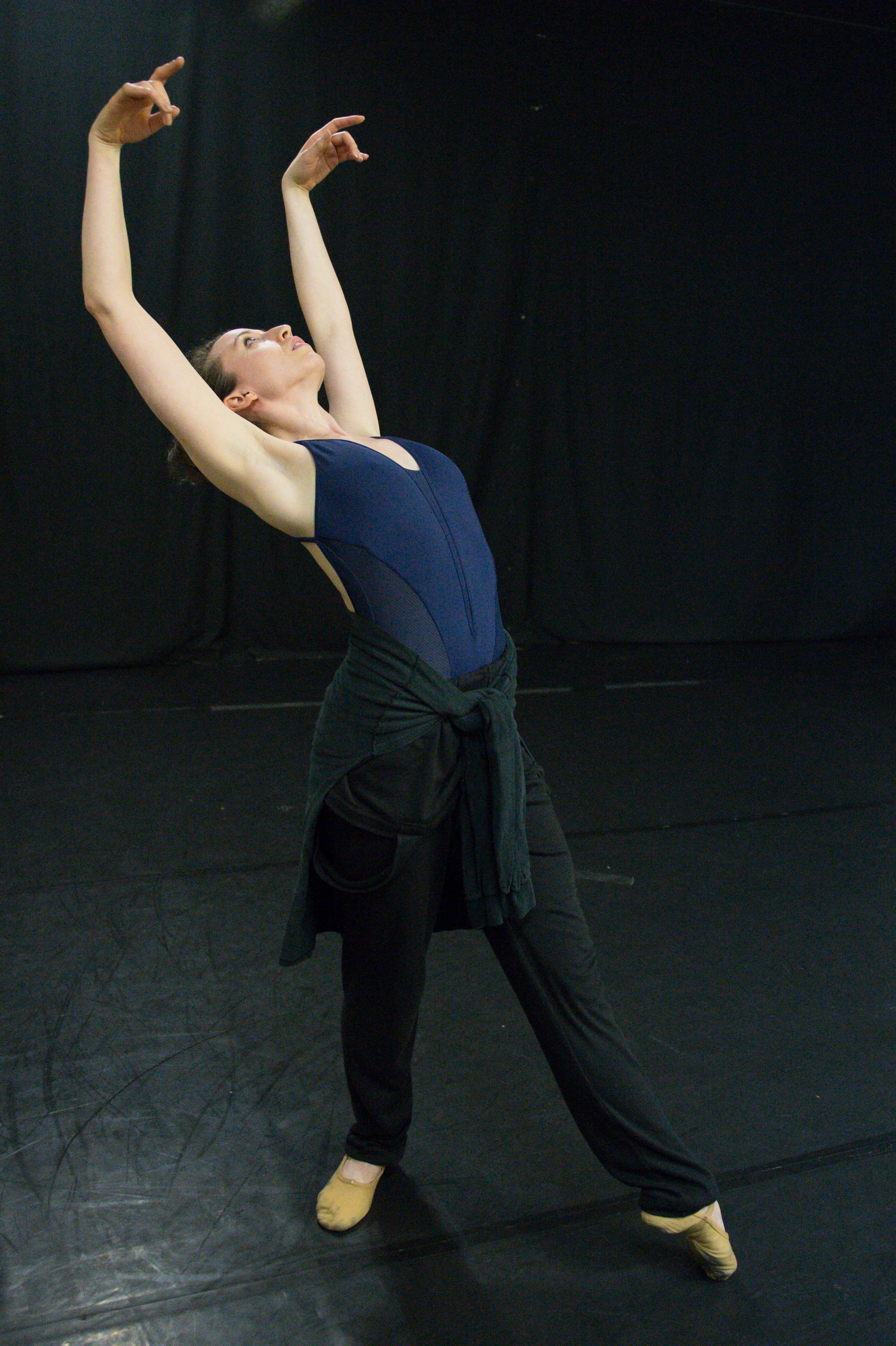 Gabrielle Zucker in rehearsal for 'Up in the Air' (Photo: David DeSilva, courtesy The Milissa Payne Project.)

Ballet to the People's date expressed dismay at the all-too-early finish of this wondrously evocative piece, but Joe Landini, superb host that he is, distracted us with trays of delectable little cupcakes.

If you were among the legions who did not maneuver fast enough to get a ticket to this week's premiere of Up in the Air, catch The Milissa Payne Project again at SPF6 August 14-18 at the ODC Theatre. They will be blessed with a larger stage -- and, one hopes, a budget for costumes. The girls' bare legs look sensational but the casual United-Colors-of-Benetton style of their shirts and of the men's jeans tended to obscure the beautiful movement; a more sleek, elegant, otherworldly look seems called for.

The Milissa Payne Project will also be hosting an Open Rehearsal at the StageDor Studio in Sausalito on Monday April 29th during Bay Area Dance Week. Admission is free, as with all BADW events. Early sign up recommended as seating is limited.

Arts Ballet Up In The Air