On the second day she was embedded with Marines during the invasion of Iraq, journalist Mercedes Gallego was approached by several service women. They cautioned her that it was not safe to be alone and warned her that they always went to the bathroom in pairs, taking their rifles. The reason, they explained, was fear of being raped. That was Gallego's introduction to the subject she and director Pascale Bourgaux explore in the 29-minute film, Rape in the Ranks: The Enemy Within (2007). Bourgeaux was recently in New York for a screening at the New York Independent Film Festival. She articulated her desire to give a voice to the victims and their families who have been impacted by this crisis.

Four women's narrative strands are followed in the documentary. One of these is related by the family of Tina Priest, who is dead. As her mother and twin sister are shown cleaning Tina's headstone and tending her grave, they talk of how she died in Iraq. The Army notified them that the cause was a self-inflicted gunshot wound to the chest. Her mother makes clear, "I don't know how she died, but I want to know how." In a letter written from Tina to her mother she confides, "He raped me, but if he gets set free, he will beat me to death or murder me." Two weeks after Tina's death, a military court ruled that she had never been raped and was not killed. An independent ballistics specialist hired by Tina's family believes "the Army is hiding the truth." The narration states that in 2006 there were 3,000 complaints of rape and attempted rapes, with less than 2 percent of the aggressors going to court. As Gallego said to me by phone, "War is not an excuse." She used the phrase "impunity" to characterize the laxity of the military's response. She suggested the problem has increased with more soldiers on the ground, and added, "but it's really an old issue."

This was borne out by my interview with a woman who identifies herself publicly as PB Rose, an alias she uses to write for the site Veterans Today. She related her situation of having been "savagely raped" in 1989. She was a 21-year-old Cadet in an ROTC program at Fort Bragg. On an extremely hot day, she accepted the offer of a ride in an air-conditioned car from a Master Sergeant in his mid-forties. He had always presented himself to her as a "father figure." He beat her when she resisted, and then raped her. She didn't file a report until 2008 when, as part of her healing process and psychological acknowledgment of the ordeal, she filled out the paperwork.

Rose believes she was not the NCO's last victim and told me, "He could have killed me and dumped me, and they would have written me off as AWOL." None of this jived with the motto she had learned in the service: "Mission first, people always." Rose's advice to women who have been assaulted is, "As soon as it happens, have a rape kit done - even if you have to pay. Transfer out of the unit to a different state, and then file your paperwork." Suffering from PTSD, Rose went to VA facilities, but found that the services were "inequitable," and "second-class to what the men received." She didn't feel safe in the environment, and eventually opted to pay out-of-pocket for private counseling. She explained, "The minute I walked into that [VA] building, I was on guard."

Kira Mountjoy-Pepka, Director of Pack Parachute Charity, informed me that this was not unusual. "The MST community is alienated and pushed aside in the military, and then in the Vets community. Deliberate outreach is absolutely essential."

Her organization offers a space that is neutral and specifically non-military. In discussing MST, Mountjoy-Pepka hammered home the point that what happens is a two-part trauma. After the initial act, persecution follows, and a continuum of symptoms including shame. She constantly hears from victims that "the aftermath is even worse." Although Mountjoy-Pepka believes that the "VA is doing the best it can," she understands why most people cannot re-enter the military setting to access services. Pack Parachute Charity offers direct financial support to former members of the military with MST who reside in Washington State. Claims for financial compensation can be overwhelming and impossible to navigate. When those who have suffered have their claims denied, Mountjoy-Pepak indicates, "They feel rejected all over again." (It is important to note that Pack Parachute Charity has been actively helping men who have been victims of MST, for whom the facilitation structure isn't set up.)

The voices against these horrific acts are gaining traction. One of the constants in the conversation is twenty-four year veteran of the U.S. Army and U.S. Army Reserve, Ret. Colonel Ann Wright. She said at a Code Pink rally recorded in Rape in the Ranks, "You need an independent team to do investigations. You have to keep pushing them [the military]...You have to be in their face all the time, and if you're not - nothing will happen. Wright was part of an action that took place on October 13th in New York City, in front of the Armed Services Recruiting Station in Times Square. She was joined by playwright/activist Eve Ensler and Staff Sergeant Sandra Lee of the U.S. Army Reserves, who spoke about how she was raped twice in Iraq in 2005.

October 12th-16th was Military Rape Awareness Week, and several organizations were on board for the implementation of activities. Data was put out to the media including: 1 in 3 women in the military have been raped or assaulted; 37 percent of victims are raped multiple times; 14 percent are gang raped. Michael T. McPhearson, Executive Director of Veterans for Peace, conveyed by phone, "It's a societal problem that magnifies itself in the military. In order to change the military, we have to change the larger society. Men have to step out and make other men accountable."

On November 7th, veterans with Military Sexual Trauma marched in the Auburn Veterans Day Parade in Washington State for the first time. 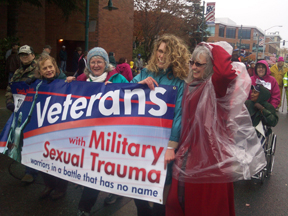 On November 11th, in downtown Seattle, Veterans with MST will be honored at the Garden of Rembrance at Benaroya Hall. Participating groups will include VetWow, Pack Parachute Charity, Vietnam Veterans of America, Veterans for Peace, and Disabled American Veterans.

As more awareness is raised about Military Sexual Trauma, the national consciousness should encompass advocating for veterans - and those currently serving - who have MST. It's time for them to get the assistance and justice they deserve.

Coalition Against Sexual Assault in the Military Services (CASAMS)