NEW YORK -- As President Barack Obama and Mitt Romney furiously lobbed jabs and zingers at each other during Monday night's foreign policy debate, it would have been easy to miss one basic point of agreement: neither candidate favors decreasing the Pentagon's base budget.

Even as Obama mocked Romney's call for more ships to add to the Navy's fleet as akin to playing "a game of Battleship," the president made careful mention of his own expansionary defense policies.

"Our military spending has gone up every single year that I've been in office," Obama said. "We spend more on our military than the next 10 countries combined."

He was right -- and when he said it, it almost sounded like a brag. Aside from a brief proposed dip in 2013, Obama's budget calls for military spending to continue to increase.

Romney, for his part, did not repeat during the debate his promise to spend an additional $2.1 trillion on the military over the next decade. But he did say, citing Sept. 11, "we have to make decisions based upon uncertainty. And that means a strong military. I will not cut our military budget."

Left unquestioned by either candidate or moderator Bob Schieffer: whether America's military budget, excluding the cost of wars in Iraq and Afghanistan, should stay so sky-high. For critics of the Pentagon, Monday night's debate was a dispiriting reminder that Democrats and Republicans alike hold such spending sacrosanct, even at a time of mounting deficits and unquestioned American military dominance around the world. 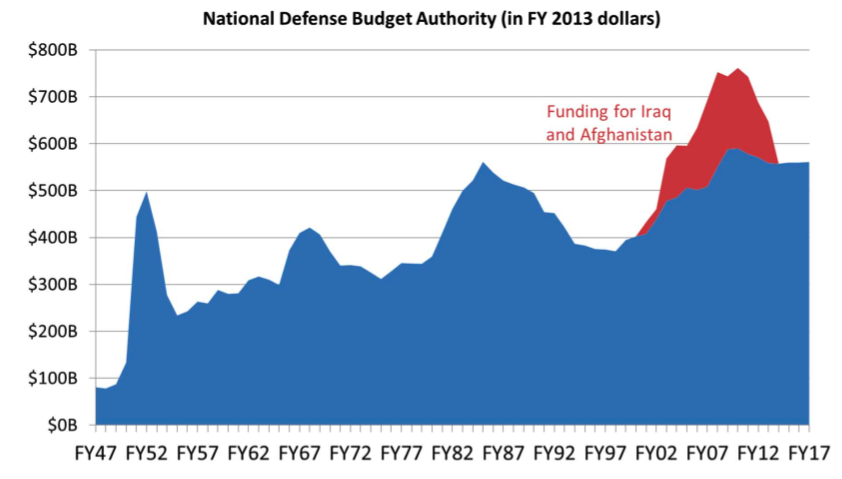 "Obama and Romney were competing about who could spend more on the military," said Mattea Kramer, a senior research analyst at the National Priorities Project. "When you spend more than the next 10 countries combined, you have ... an overmatch."

Add up the cost of all of the United States' national security spending, including additional costs like homeland security, Kramer found, and the country will spend $931 billion in fiscal year 2013.

Even though he made fun of Romney for having a Cold War mindset, the president did not say a word about weapons systems, like the Virginia class submarine or the F-35 fighter, suited for Soviet-style threats. In fact, much of the discussion on Monday night was about how to stop Pentagon budget sequestration. Both Obama and Romney pledged it would not happen on their watch.

"Sequestration is not advisable from any perspective," agreed Kramer. Simply slashing $56.5 billion from the Pentagon budget would be a big mistake.

"There are much smarter ways to implement it than in what's currently in the docket," she argued, by having a conversation about the planes and boats America does not need, which could lead to similar savings over the 10-year horizon.

Kramer did give the president credit for criticizing Mitt Romney's call to spend 4 percent of GDP on the military, which would require deep cuts to Medicaid, health care and education to make the math on Romney's goal to balance the budget work. So did Christopher Preble, vice president for defense and foreign policy studies at the Cato Institute.

"I've run the numbers and I don't think they work out, even assuming the most optimistic set of scenarios," Preble said. If Romney sticks by his pledge, "he's going to have to reduce entitlement spending."

Obama, meanwhile, has campaigned throughout the election season on a promise to spend dollars that would have gone to the wars in Iraq and Afghanistan back in the United States.

"What I think the American people recognize is after a decade of war, it's time to do some nation-building here at home," Obama reiterated during the debate. "And what we can now do is free up some resources to, for example, put Americans back to work, especially our veterans, rebuilding our roads, our bridges, our schools."

Despite that talk about a peace dividend, Preble argued, Obama has been just as steadfast in his refusal to target the Pentagon's baseline budget.

"We are thankfully coming out of ... two deeply unpopular wars that haven't created greater security for the United States, so why is it that we would maintain such an enormous military infrastructure if we are committed to nation-building at home?" Preble asked.

"I guess I would say that he talked a good game, but his budget numbers don't back that up, as he would continue to spend."