How much a country spends on its military budget is a reflection of a number of factors, including the size of the economy, the perceived military threat or opportunity, the influence of the private sector on government policy and the overall priorities of a society.

When we look at the absolute spending amount, the United States is by far the largest spender. According to the Stockholm International Peace Research Institute (SIPRI) Yearbook 2011, America spent nearly $700 billion in 2010. This accounts for about 43% of the entire global military spending and is nearly 6 times more than the amount spent by the next largest, China. In fact, the United States spends more on its military than the total spent by the second largest (China), third largest (United Kingdom), fourth largest (France), fifth largest (Russia)... and fifteenth largest (Turkey) combined. 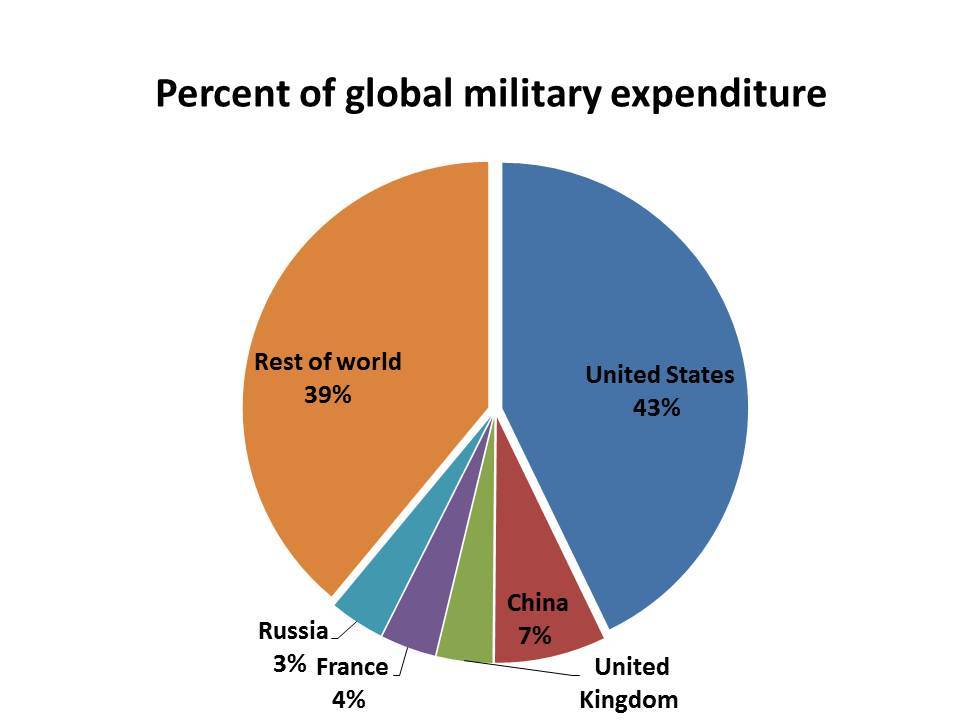 So, while in absolute dollar amount the United States is an extreme outlier regarding its military spending, it is more appropriate to examine the normalized spending since comparing the absolute amount each country spends on its military another isn't very fair. After all, we would certainly expect that a large country with one of the world's largest economies like the Russian Federation would spend more than a small country like Lithuania. But what is the most appropriate way to normalize the spending?

If we look at the military expenditure per capita, we can control for differences in population between different countries. In this comparison we see once again that the United States is an outlier, spending an average of over $2,000 per person versus a global average that is about one-tenth that amount. Among the top 15 countries with the highest military expenditure, only two other countries had more than $1,000 per person spent on military, Saudi Arabia and Australia.

If we chose to normalize by the size of the economy, rather than size of the population, we continue to see that the United States is an outlier. America spends 4.8% of its GDP on the military or about double the global average. In fact, Saudi Arabia is the only country in the top 15 for military expenditure that has a higher percent of its GDP dedicated to the military.

It is clear by any measure that America spends much more on its military than other countries. American military expenses have dramatically increased in the last decade due to the wars with the budget for defense more than twice what it spent in 2000 and about 20 percent of its entire federal budget.

Will the failure of the super committee really lead to a significant cut in the massive military budget? It's well past time for politicians to take an honest look at the numbers and find the right balance.

5 Countries With The Highest Military Expenditure In 2010