Tired of seeing their husbands struggle with PTSD without getting the care they need, a group of desperate military wives are going topless to get the attention their cause deserves.

One in five veterans of the Iraq and Afghanistan Wars suffers from post-traumatic stress disorder, a debilitating condition that can lead to violent mood swings, alcoholism and suicide. But, despite the widespread nature of the disorder and its potential risks, vets say they’re not getting proper medical treatment, which is what inspired Ashley Wise to launch "Battling Bare."

All wives of vets suffering with PTSD, the initiative’s members scrawl messages of commitment to their struggling husbands on their bare backs.

"Broken by battle, wounded by war, my love is forever," the vow reads. "To you this I swore, I will quiet your silent screams, help heal your shattered soul, until once again, my love, you are whole."

Click through the slideshow below to see images from Battling BARE. (STORY CONTINUES BELOW)

Wise was inspired to take this drastic step when her husband, Rob, returned home from his second tour in Iraq in an unrecognizable state. He holed himself up in a motel room with multiple weapons and booze, Business Insider reports.

But, instead of receiving help, Rob was arrested by military police and faced the threat of a dishonorable discharge that would have robbed the Wise family of military benefits.

“I felt like streaking the general’s lawn, because then maybe a naked woman would get attention, wouldn’t get swept under the rug.” Wise told CNN.

Rob is hardly the exception. Veterans make up 20 percent of suicides in the United States, and ex-soldiers 24 and under take their own lives at four times the rate of other veterans, according to Face the Facts. Some are too afraid to open up about their pain because it could hurt their military record, Wise explained to news outlets.

Soon after her husband's arrest, Wise made a bold move and posted her first nearly nude photo. Wearing nothing but her husband’s camouflage cap and with his assault rifle perched above her head, the dutiful wife bore her naked torso with her vow inscribed in pen. Within minutes of posting the image to Facebook, the image went viral, grabbing the kind of focus that she believes PTSD is sorely lacking.

The Army brass took notice and Rob's in a better place now, according to Business Insider. He's on staff at the Army Warrior Transition Battalion at Fort Campbell in Kentucky.

Wise calls contributors her "Battle Buds" -- all of whom have a story to tell.

"In talking, there’s healing and not ignoring it," she told WSMV. "Because we’re ignoring it now, and people are dying.” 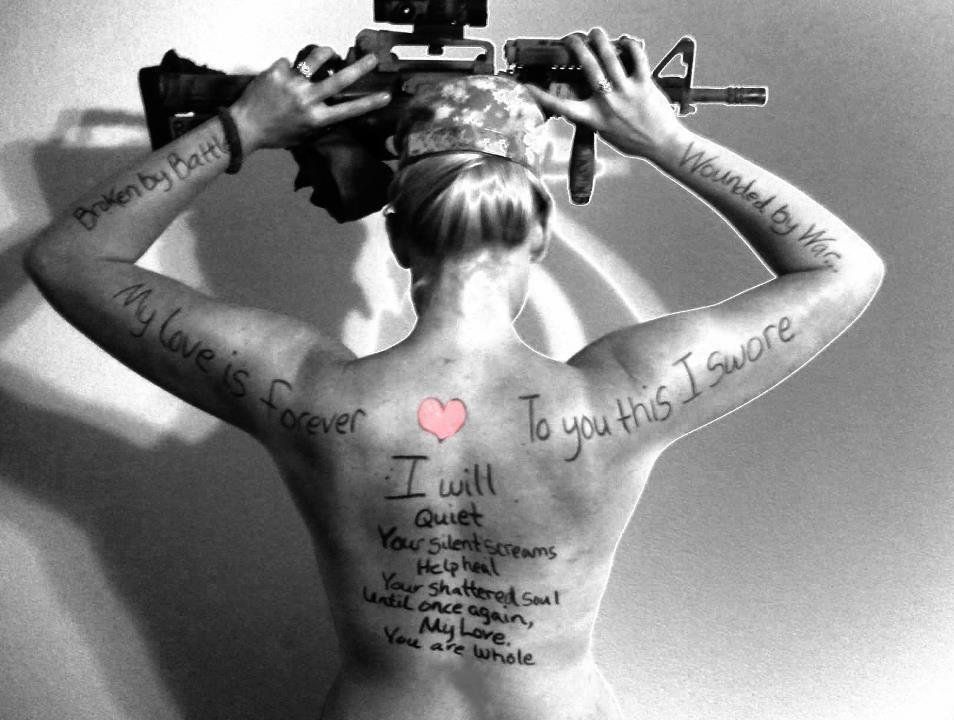