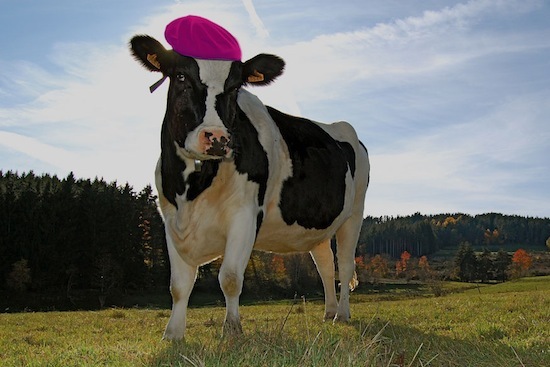 A few years ago, I noticed that if I added too much milk to my cereal, my nose and throat would become congested for about an hour. The same would happen if I indulged my inner glutton and went for a second helping of ice cream. It seemed like the genetic mutation that lets a sizable portion of the adult population digest lactose was cutting me off.

The phlegm build-up was only occasional and minor, and a small price to pay for an extra scoop of ice cream. But then I caught wind of reports and counter reports about abnormal somatic cell counts, and the pus content of milk, which came from high levels of mastitis (infected udders) in dairy cows.

After wading through the conflicting information and propaganda on both sides of the milk debate, I decided to swap over to soy milk. Even though the amount of pus found in milk appeared to be small, in my mind it was too late. All I could see was white, gooey pus pouring out of milk carton spouts -- albeit pasteurized and sanitized pus, but pus nonetheless.

At this point, I have to admit to some cerebral hypocrisy. Despite my mental block and physical reaction to milk, other dairy products like Ben & Jerry's Chocolate Fudge Brownie Ice Cream (my heroin) and Gorgonzola cheese escaped my prejudices. Even if these dairy-based goodies were made of mostly pus (they aren't), I would have been hard-pressed to give them up. Thankfully, or regrettably, depending on your perspective, the human brain can wall off certain types of information when it comes to need -- or in this case, pleasure.

Anyway, I ate cereal with soy milk for more than a year. Then, one day, I ran into a woman who told me I should give up soy milk due to its high estrogen content, which could lead to man boobs and lethargic sperm. While I love boobs, I didn't want my own pair. After some research (damn you, Internet) I discovered that yes, if you drink a ridiculous amount of soy milk, upwards of several liters per day, man boobs and a low sperm count could very well be on the way. I drank just a few splashes each week, which meant I was probably safe, but a little bit of knowledge can be quite damaging, thus soy milk became tainted for me.

I moved on to rice milk next, and was happy for a time, but then, of course, I heard that rice milk had a few problems too. Honestly, all I wanted was to have muesli on occasion and not picture white pus dripping into my cereal bowl, or have to worry about shopping for a bra because of my breakfast choice. I ignored the rice milk reports, and left it at that.

As chance would have it, a French friend stayed with me for a couple of days after I'd switched over to alternative forms of milk. One morning, with our cereal, I set out a carton of oat or rice milk (I forget which) and he remarked that he'd never tried it, as he preferred plain milk. We discussed pasteurization and pus for a while, which always makes for a delightful mealtime conversation. He didn't know the meaning of "pus" in English at first, but after a rather graphic explanation on my part, he realized that it was the same word in French -- just with a nasally pronunciation.

My friend, an aficionado of all things dairy, didn't like the idea of pus in his milk. Who would? I told him European dairy standards were probably more rigid than American ones (I guessed), and he shouldn't worry. That didn't stop him from checking his iPad and scouring article after article in French about "pus in milk," which should never be confused with the fairy tale, Puss in Boots. After some rigorous research, he looked disheartened.

"French cows too?" I asked him.

I apologized for telling him, because once you know a thing, you can't unknow it, unless you sustain a blunt trauma to the head, or suffer from some kind of a degenerative mental disorder -- neither of which are desirable ways to rid the mind of unwanted information. Even so, I realized that like me, with my paradoxical affinity for good ice cream and cheese, and my avoidance of milk, he would eventually overcome what he'd learned that day, and be able eat yogurt and tons of cheese for years to come.