The second annual World Milksharing Week (Sept 24-30) is approaching fast and my family has much to celebrate. Our baby boy has been fed with human donor milk for the past 17 months. I breastfeed him, but I don't make all the milk he needs, so we are incredibly grateful for the generosity of our donors. Although milksharing is an ancient practice that probably dates back as far as humans do, many people today know little about it. I'll try to shed some light on several common misconceptions I have encountered in my own journey:

Milksharing myth #1: Sharing that is initiated on Facebook through groups like Human Milk 4 Human Babies takes place between complete strangers. Facebook is indeed the first point of contact between many donors and recipients, but they often spend a lot of time getting to know each other in person. Our main donor provided milk for our son for over one year. During that time, we went to her house once a week. Our children played together, we shared meals, and she and her family attended our son's first birthday party. 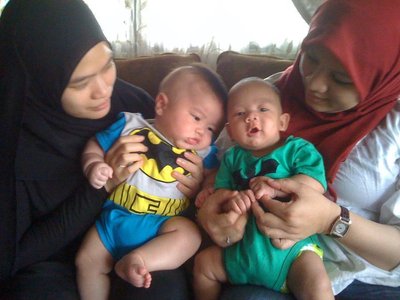 These babies are "milk siblings." Their families are connected through human milk donation. Photo via worldmilksharing.net

Sometimes milksharing reconnects old friends. My Dad, highly suspicious, once asked me about a particular donor, "Exactly how well do you know this woman?" I told him the truth, which was that I had met her more than ten years ago, when we were both in high school. We worked together for several years playing music at weddings. We eventually lost touch, but rekindled our friendship when she responded to my Facebook request for milk. We delighted in catching up on news and admiring each other's babies.

Myth #2: Milksharing is inherently risky because of possible HIV transmission, while formula-feeding is risk-free. In many countries, blood tests for infectious diseases are a routine part of prenatal care, meaning that donors would normally be aware of their health status in this regard. Recipients can ask to view the results of these tests. In addition, according to the CDC, the risk of HIV transmission through breast milk is thought to be low in part because "Chemicals present in breast milk act, together with time and cold temperatures, to destroy the HIV present in expressed breast milk."

Formula-feeding is not without its own risks. Several studies suggest that babies who are formula-fed may suffer from a higher incidence of a number of illnesses, including childhood leukemia, diabetes, and asthma. Formula recalls are not infrequent due to a variety of causes, such as the presence of dangerous bacteria and unintended ingredients like beetles and melamine.

Our family felt that the risks of formula-feeding were more difficult to control than the risks of using donor milk. We carefully interview each of our donors and request their personal health information. Early on in our milksharing journey, we chose to home pasteurize some donated milk when we felt unsure.

Myth #3: Milk is scarce and this is why milk banks can't keep up with demand. People who find donors through groups like Human Milk 4 Human Babies are taking milk away from the sick and premature babies who need it the most. In fact, many women have extra milk but are not allowed to share it with a milk bank. Women who have lived in the UK cannot give to a bank because of the possibility of mad cow disease. Others cannot donate because they do not have at least 150 ounces to give at once. A woman who regularly takes a medication is usually prohibited from donating to a bank even if her doctor has advised her that breastfeeding her own child is safe. Some women choose to donate milk via groups like HM4HB because they know that milk banks in North America pasteurize their milk (interestingly, this is not the case in Norway), thus destroying some of its beneficial components.

Milksharing stories are as varied as the donors and recipients involved. People have all kinds of reasons for donating or needing milk. Many parents only require a small donation to see them through until they are able to breastfeed successfully. Others, like our family, need ongoing help. What we have in common is a dedication to human health and normal infant feeding.

More:
human milkParentsBreastfeedingdonor milkbreast milk
Newsletter Sign Up
Raise the kind of person you'd like to know
Subscribe to our parenting newsletter.
Successfully Subscribed!
Realness delivered to your inbox