It's possible that most people on Earth have never seen the Milky Way, the galaxy in which we live. The Milky Way used to be a part of every human's life experience, but now that the majority of mankind lives in cities, with their light pollution, the Milky Way is rarely seen.

Our Milky Way galaxy is at its best for the next couple of weeks, but most of you will need to make a special effort to see it. It will probably require a drive of an hour or more to reach a dark enough location, where the Milky Way will be visible. Then it will require another 20 minutes for your eyes to become adjusted to the dark.

What will you see? Not the brilliant array of stars you see in photographs made with long exposures. The real Milky Way looks like a faint band of moonlit cloud arcing across the sky. Your eyes cannot resolve it into individual stars.

No one knew it was made up of stars until Galileo first turned his telescope on it in 1609; this was one of his major discoveries. It wasn't until a couple of centuries later that astronomers began to realize that this band of stars was in fact the local version of the "spiral nebulae" that astronomers were discovering all over the sky. [Our Milky Way Galaxy Explained (Infographic)] 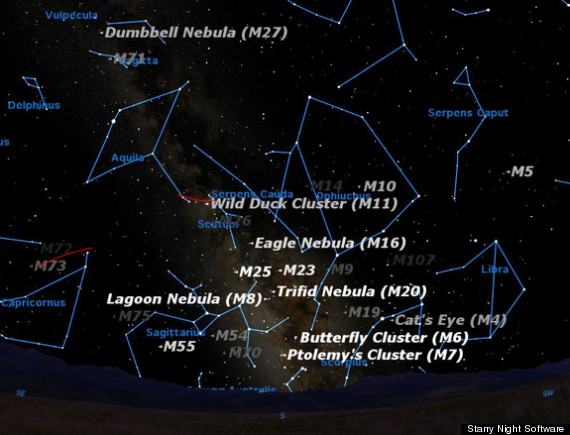 The final clue to the puzzle was the realization that stars were all grouped into huge islands called galaxies, each containing many billions of stars. The Milky Way is our local galaxy.

Even today, beginners in astronomy often get confused by the two meanings of "Milky Way." It can be used in its original sense to refer to the faint band of glow arching across the sky, or in its modern sense referring to the galaxy in which the sun resides.

To see what the ancients called the Milky Way, you must first find a truly dark location. The maps on this web site show the areas in the world with the brightest and darkest sky. If like most people on Earth you live in a city, you can probably identify it as one of the white splotches. Use the maps to identify a green, blue, or black location near you; that’s where you must go if you want to find the Milky Way. [Best Telescopes for Night Sky Beginners (Reviews)]

But wait! Don’t try to spot the Milky Way tonight, because there is still an almost full moon in the sky. Wait a few nights until the moon has moved on in its monthly trip around the Earth.

When you get to your dark night sky, you may still need to block any nearby lights from your view. Then you will need to wait about 20 minutes for your eyes to adapt to the dark. Then, look towards the south in the sky.

Look for a faint silvery or milky cloud. Some parts will be brighter than others, giving a faintly mottled effect. These are star clouds, concentrations of millions of stars too faint to see as individual stars. You may also see some “holes” in the Milky Way: clouds of interstellar dust blocking our view of the stars beyond.

If you have a small binocular with you, say a 7x50 or 10x50, you can recreate Galileo’s discovery that stars make up the “glow” of the Milky Way. Even that small amount of magnification will be enough to resolve the Milky Way into thousands of stars.

What to see in the Milky Way galaxy

Start your tour of the Milky Way by looking for the constellations Scorpius and Sagittarius. Unlike many constellations, these form clearly recognizable patterns.

Scorpius looks like the scorpion it’s named for, complete with long curving tail with stinger at the end. Its heart is marked by the red giant star Antares. Sagittarius looks nothing like a centaur archer, but rather like a prosaic teapot, complete with handle, spout, and lid. If you live in the north, you will find these low in the southern sky; if you live in the south, they will be almost overhead.

Because the center of the Milky Way is the richest part of the sky, it is crammed with nebulas and open star clusters. To give you some idea of this richness, the chart shows the names of some of these objects. The brightness of the name indicates the brightness of the nebula or cluster.

The brightest objects are gathered around the center of our galaxy, right on the border between Scorpius and Sagittarius, between the scorpion’s stinger and the teapot’s spout.

But for now, don’t worry about the names. Just take in the rich clouds of light as you sweep upward from Scorpius and Sagittatius (in the Northern Hemisphere) or either left or right from overhead (in the Southern Hemisphere). You don’t need to put a name to sheer beauty.