While the fashion world tends to favor the waif-like figures that are ubiquitous on runways and in the pages of glossy magazines, it seems some models think that that look doesn't appeal to everyone... especially men.

Veteran model Milla Jovovich dishes up some real talk in the latest issue of Net-A-Porter's The Edit, claiming that she has no qualms about gaining weight as she gets older. In fact, she says that it makes her even more attractive:

"I always notice guys are more attentive when you have a little weight on you. My husband always loves it. [He says]: 'Your boobs! Your arse looks amazing!'"

Preach, sister. After giving birth to her daughter in 2007, Jovovich bounced right back into her modeling career, which unfortunately comes with the pressure to lose weight. "Last summer, I was definitely 15 pounds lighter," she tells The Edit. "I'd done a Vogue Paris cover at the end of 2012, so I'd been to the gym and I was on a liquid diet. I lost the weight but, to be honest, when I looked at pictures of myself –- not in a magazine, in real life -– I felt I looked older."

Jovovich isn't the only model who's turned to a "liquid diet" to drop pounds before a big gig. Victoria's Secret Angel Adriana Lima has said that she has a strict "no solids" rule nine days before the lingerie brand's blowout fashion show. Unfortunately, the modeling world's support of such regimens can be troublesome for not just models, but also women everywhere.

"This idea of attaining perfection is a huge problem," Dr. Steve Hambleton told The Daily Telegraph in April about the proliferation of liquid diets in the industry. "It places significant pressure on children and teenagers and the results can be devastating. It can lead to mental health issues, eating disorders, excessive exercising and unnecessary surgeries."

Hopefully, more models will follow in Jovovich's lead and encourage positive body images at any weight (or age). Check out her cover shot for The Edit below and read the rest of her interview here. 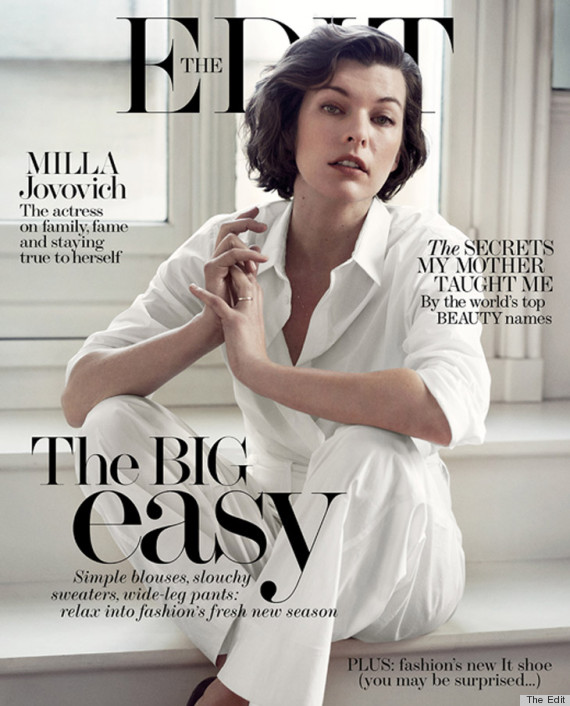 Check out the Milla's style: