When Frank and Medina Fredericks first sat down for coffee together in 2008, they didn’t waste any time with small talk.

“Frank had 20 questions for me,” Medina joked to The Huffington Post over the phone.

The tactic worked for Medina, who is a few years older than Frank and said she “wasn’t just dating for fun.” At the top of both of their agendas was a topic many couples save for much later -- whether they want to have kids, and if so, how they'd want to raise them.

“It was clear to both of us it could be a disqualifier if we didn’t like each other’s answer,” Frank said.

Both Frank, 29, and Medina, 33, come from strong faith backgrounds. Frank identifies as evangelical Christian and Medina is Muslim but was raised a multi-faith household. Despite coming from two often-polarized religions, the pair, who have been married three years, said faith doesn’t pose any obstacles in their relationship.

More important to them, Frank said, are the challenges many couples face -- “money, space, time, how do we adjust our lives to match being good parents with being kick-ass at our day jobs, and keeping the energy to do that.” 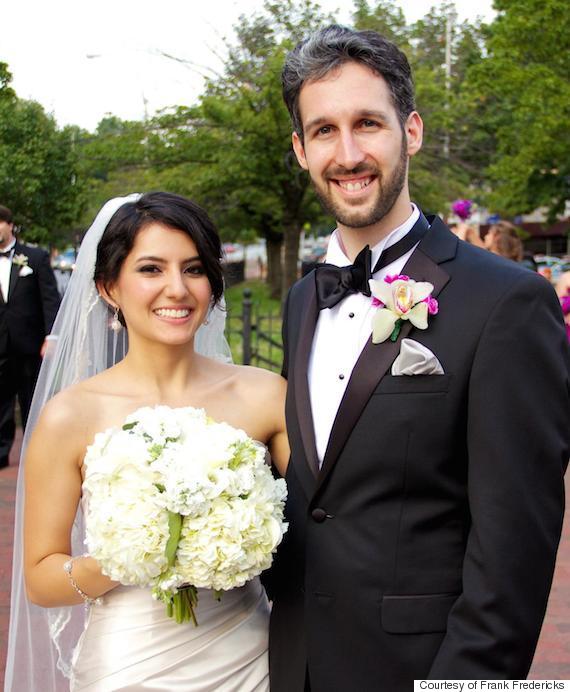 What sets Frank and Medina apart is that they got some of these discussions out of the way before they even started dating -- something they said other interfaith couples should consider doing as well.

“Have the kid conversation really early,” Frank said. And Medina added: “Don’t be afraid of the possible conflict.”

Reverend Jim Burklo, associate dean of religious life at the University of Southern California, has officiated hundreds of weddings over the last three decades, many of them between mixed-faith couples. He’s seen a rise in such unions in recent years, and said they can be “an occasion for learning about your own faith.”

“Marriage gets people looking deep within,” Burklo told HuffPost over the phone. “You’re bringing your sense of self to the marriage and the ceremony, [and] you start thinking about what kind of legacy you want to pass on.”

What Frank and Medina discovered in their initial chat is that neither is particularly concerned with raising children in the context of a congregational community. Instead they hope to raise children immersed in spiritual life more generally.

For two young professionals in New York City, opportunities for such engagement abound. Medina is a ninth-grade teacher, and Frank is the founder and executive director of World Faith, an interfaith youth empowerment organization that operates in 12 countries around the globe.

“[New Yorkers] have so many other social structures [that] we’re becoming anti-congregational,” Frank told HuffPost. “I get what I want outside of traditional institutions and congregations.”

In a recent blog post on The Huffington Post, Frank argued that the concerns of millennial interfaith couples are different than those of interfaith couples in earlier generations. For one, millennials are more religiously unaffiliated and attend religious services less often than older generations do now or did at the same age. Of the two-thirds of millennials who are religiously affiliated, less than half say they attend weekly services.

Because of these shifts, Frank said, millennial interfaith couples are less concerned with things like congregational acceptance or coming-of-age rituals. The things that do matter transcend religious institutions, he said.

“Like the generations before us, we must grapple with identity, family acceptance, and family tradition,” Frank wrote. “In fact, in the absence of congregational liturgy, the challenge of feeling ‘authentic’ in individual worship, balanced with shared family ritual, may be even more difficult to navigate.”

Susan Katz Miller, author of Being Both: Embracing Two Religions in One Interfaith Family, argued that another thing defining millennials is their de facto acceptance of diversity and intermarriage. Many opt to date and marry within their communities, but intermarriage by race and ethnicity is on the rise, and points to the rapidly diversifying world young people are growing up in today.

“People who have grown up connected to the world globally, on the Internet, are much more aware of the spiritual diversity, fluidity and flexibility,” Miller told HuffPost. “They’re aware that interfaith families have been able to thrive with or without the support of religious institutions that disapprove of them.”

The shift away from congregations does not necessarily indicate a lack of spirituality, though, she added. Young mixed-faith couples like Frank and Medina are finding new ways to explore and express their spirituality.

This may continue even after couples start having kids, at which point, Miller said, many parents begin yearning for religious communities even if they hadn't earlier.

“I think you’re going to see a lot more small groups of families coming together to celebrate together, to create their own ceremonies drawing on these ancient traditions but not necessarily feeling the need for traditional clergy or architectural space,” Miller said.

This may come as discouraging news for religious institutions, which Miller said have created “challenges for themselves by excluding interfaith families” and ignoring the “demographic reality” of rising mixed-faith marriages.

Beliefs about mixed marriage vary from religion to religion, and can even differ within faiths. The Catholic Church forbids marriages outside the faith unless the couple meets certain requirements, which include removing “dangers of defecting from the faith,” and promising to raise offspring as members the church.

In Islam, most religious scholars say marriage outside the faith is acceptable for men but prohibited for women. Mixed-faith unions are also forbidden in Orthodox Judaism unless the non-Jewish partner converts to the faith. In Reform Judaism and many progressive religious communities, however, interfaith couples are often accepted and welcomed into congregations.

Naomi Schaefer Riley, author of Til Faith Do Us Part: How Interfaith Marriage is Transforming America, commissioned a survey from YouGov in 2010 to identify some of the characteristics of interfaith marriages. In addition to traditional two-faith pairings, Riley’s definition included Catholic-Protestant unions, marriages of mainline Protestants to evangelical Christians, and couples in which one member was religiously affiliated and the other was not.

Some faith-based organizations have cropped up in recent decades to cater to families with multiple religious traditions. These groups are often tailored to Jewish-Christian families, like Interfaith Community in New York and The Interfaith Families Project of Greater Washington in the country’s capital.

These and similar organizations offer interfaith educational programs for children in mixed-faith families -- something Miller said can be even more important than congregational affiliation.

“No matter what choice you make, it's still important to give your children interfaith education,” Miller told HuffPost. “Children are absolutely capable of integrating the two world views of their parents.”

Frank and Medina expect as much in their interfaith household, and Medina brings the personal experience of having grown up with a Catholic father and Muslim mother.

“Growing up in a multifaith household, it became a norm to me,” she said. “With our kids it’s going to be normal too.”