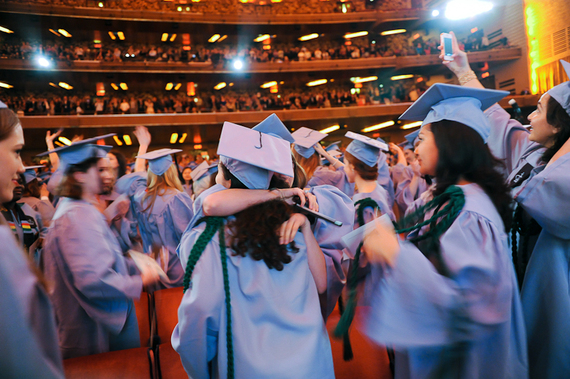 Over the past few years, we've been hearing from Sheryl Sandberg about how, "Success and likability are positively correlated for men and negatively correlated for women." In other words - he's a boss, and she's a bitch. But as many young women around the country get ready to graduate next month and enter the workforce, how do we help them move past this cultural stigma?

"The double bind is a real thing," said Kathryn Kolbert, Director of the Athena Center for Leadership Studies at Barnard College in New York City, in a recent interview with me. "It's absolutely what women face in many circumstances. Not all, but many. Certainly in those in which they are a minority in a room."

Barnard, one of 46 remaining all-women's colleges in the country, is dedicated to the advancement of women's leadership around the world. As a women's college, Barnard is a place where, for four formative years, young women lead by definition and habit. "They are the heads of student organizations, they are the most prominent voices in classroom discussions, and they are surrounded by female role models," said Barnard president Debora Spar, in an email interview. "Women's leadership is built into day-to-day life."

Students also can speak their minds without worrying about the opinions of men and having to express the "women's point of view."

This is a powerful thing, since, for most of history, there has been an assumption that leadership belongs to men and that leaders are men. If the leader was woman, she was expected to act like a man, but be "feminine enough" to be likable.

Accordingly, most leadership development programs - within schools, universities, companies and organizations - have been directed toward a male audience. They have been designed around the leadership style of men and men's lives, focusing on such things as assertiveness, linear thinking and hierarchical command. They have, for the most part, neglected emotional intelligence, consensus building, holistic thinking and the truth of women's lives.

The traditional notion of leadership based on a masculine hierarchical form of top-down leadership is not only not effective, says Kathryn Kolbert, it is not built on the strengths that women bring.

In order to fill this gap, the Athena Center for Leadership Studies at Barnard has developed a new initiative to re-imagine what leadership is and look at what are the core attributes and skills that women need in order to be successful leaders. They call it the Athena CORE10.

These 10 interconnected attributes and skills include vision, ambition, courage, entrepreneurial spirit, resilience, communication, leverage, collaboration, negotiation and advocacy. They are taught by a team from Barnard in small seminars on campus, in on-site workshops in the workplace, and in webinars, depending on the students' stage of life and experience.

The college believes that if women are to expand their much-needed leadership presence, they need guidance tailored to their particular histories, circumstances, and styles that recognizes and celebrates their specific strengths, while also preparing them to adopt time-tested strategies. 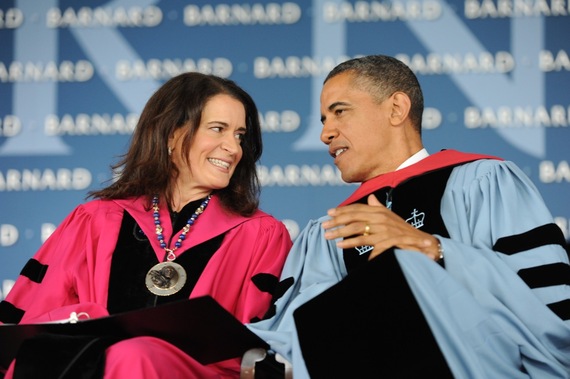 "I think when we re-imagine leadership, we are doing it for a generation of women and men," said Ms. Kolbert, a civil rights lawyer, who, before her tenure at Barnard, served as the president of People for the American Way, a progressive organization dedicated to equality under the law.

"I think that the millennial generation is very different than my own generation and that many of the things that we are stressing for young women are actually concepts and ideas that young men embrace as well," she said.

While Barnard is educating their students in this new way of thinking about and being in leadership, they are also pushing corporations, non-profit organizations, NGOs, community-based organizations and political organizations to begin thinking differently about leadership within them.

"We talk a lot about changing the capacity of women to lead, and changing the culture of the organization," says Ms. Kolbert. "Both things have to happen simultaneously."

Enter the Athena Edge. These are an array of customized modules from two-hour, hands-on, in-the-office workshops to three-day immersive retreat-based forums, based on the Athena CORE10, to boost confidence and sharpen the leadership skills of women on the team, from up-and-coming junior staff to middle managers. The program has won rave reviews from major companies such as HSBC of North America, ADP and The Hershey Company.

Women's Leadership Around the World

Barnard's re-imagination of leadership is not limited to the United States. Through a Global Symposia series, they are bringing what they know about women's leadership development to other parts of the world, and simultaneously learning about women's roles and the ways that they lead in other cultures.

Since 2009, Barnard has gathered women leaders in cities around the world, including Beijing, Dubai, Johannesburg, Mumbai, Sao Paulo, and Shanghai to address pressing issues facing women such as gender-based violence, economic injustice, maternal and reproductive health, political and social activism, and how to inspire young women to unlock their own leadership potential. This year, for the first time, they met in New York City in celebration of the college's 125th anniversary. 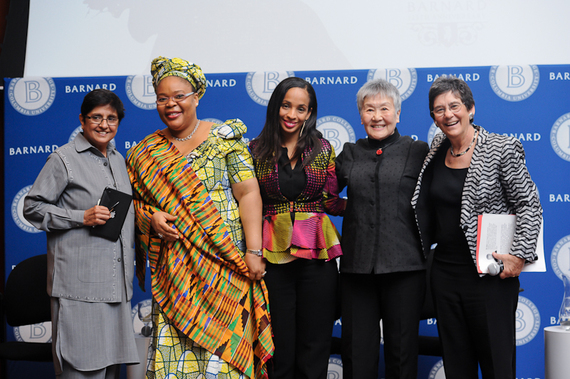 "We strive to create opportunities for intergenerational mentorship and international dialogue in order to encourage women to help one another realize their leadership potential," says President Spar, who spearheaded both the Athena Center for Leadership Studies and the Global Symposia series. The series, which is free and open to the public, has created a network of women leaders from around the world who are cross-pollinating their thinking on leadership and solving global issues.

Queen Noor of Jordan, a panelist at this year's Global Symposium, says she thinks the Symposium is a great forum to remove ignorance surrounding women's leadership. "If it were better understood, the data that exists, that clearly points to the need for women to be central to finding solutions for the most critical challenges we face in the world today, especially those of security and peace, then I think we would be a lot further along than we are," she said in an interview. "This [the Symposium] is a great forum for getting the message out."

Additionally, the Global Symposia series gives some young women of Barnard the opportunity to design and facilitate leadership programs for high school girls in different parts of the world. This year, a group of 12 Barnard students will be designing and facilitating programs in Mumbai, Paris and Rio.

This goes hand in hand with Barnard's commitment to helping young women expand beyond just developing critical thinking skills, which so many liberal arts colleges are good at, to developing the skills for critical doing. In other words, to take an idea and make it happen.

"A lot of young people don't really have that skill. They have a notion that they want to make change, but they don't have that sense of 'I can make it happen,'" says Ms. Kolbert.

"Just understanding the double bind helps women navigate it," says Ms. Kolbert. "You need to understand what you are facing."

"You need to be able to be vocal and critical at appropriate times. But most importantly, you need to know that often what you perceive as being assertive or helpful or understanding or empathetic may be interpreted in a room in a totally different way. So checking yourself, and understanding how you are being perceived is a critical aspect of leadership."

"I'm more optimistic today than I was even five or six years ago," says Ms. Kolbert. "That's because we are beginning the conversation in a very public way. The fact that there is debate on the value that women bring gives us a way to demonstrate that value."

Tabby Biddle is a women's leadership coach and consultant, specializing in helping women find their voice. She is the author of the bestselling, Find Your Voice: A Woman's Call to Action, releasing in paperback on April 30th. Learn more at tabbybiddle.com.