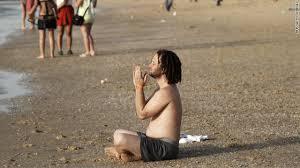 The LA Times coverage of the Pew study results released this week showing the decline in church affiliation, particularly among millennials, has put me in the uncomfortable position of agreeing with the Evangelical quoted for the article (although for admittedly different reasons), and having to unfortunately disagree with my fellow liturgical Christian.

The Evangelical, Russell Moore, president of the Ethics and Religious Liberty Commission of the Southern Baptist Convention, said, according to the Times, that

...[T]he survey results could be a positive development. People that once would have been "pretend Christian" are being more honest about their beliefs, [and that] churches should not try to water down their beliefs on issues such as marriage to appeal to a broader audience. "Almost-Christianity not only isn't authentic; it's dangerous to people's souls. I think this gives us a great opportunity for the church to free itself from its American civic religion captivity and to be the church again," Moore said. "The worst thing we can do is respond to the changing culture with pandering."

It's not difficult to discern the true meaning of Moore's statement, essentially, "good riddance to bad rubbish;" in other words, if the church is overrun by people who are not real Christians, who do not accept scriptural authority in the way we do (read, who are not homophobic like us), then churches are better off standing empty. While I completely disagree with his epithet about "pretend Christians" being dishonest about their beliefs and the general mean-spiritedness behind his statement, I wholeheartedly agree with the rest, and I'll say more about that later.

Bishop R. Guy Erwin of the Southwest California Synod of the Evangelical Lutheran Church, on the other hand, appears to indicate that the sacred trust we have in churches to enact and witness to the Gospel is some sort of a competition:

"If you work in the church, you see it happening. We have growing numbers of congregations that are having a hard time retaining their membership numbers. The people who are churchgoers are an aging generation, and they're not being replaced by younger people," he said. "We can't just assume that we can do the same old stuff and still be successful."

Erwin defines the goal as "being successful", and ties the decline to not doing things differently enough--a common belief among Baby Boomer church leaders whose solutions often run along the lines of, "bring in a rock band! Use a video screen! Dress casually! That's what the young people want!" Maybe, maybe not, but surely tinkering with the inconsequentials, the adiaphora of church services is not going to bring hordes swelling the pews and spilling out the church doors.

...But that's a topic I've covered before, so let me get to explaining why I agree with Moore. We often forget that The Church is not a building or an institution or even a set of cherished beliefs. The Church is the people--the people of God collectively seeking to understand, follow, and bear witness to the presence of Jesus Christ in their lives. Therefore, it is a positive development that the church of Christendom which arose during the waning days of the Roman Empire and continued until the middle of the last century, built on power structures, wealth, and military and governmental might, is dying. That church, or at least the idea of it, dependent as it is on institutional authority over and often against the very people it serves, must die and fall away in order for the once and future church, the one created by and for the people, the one defined by our very flesh and blood, to be reborn.

When we see numbers showing that young people have fallen away from The Church (the current study shows almost 1 in 4 Americans have no religious affiliation), rather than wringing our hands and focusing on re-evangelizing these poor lost souls reared under the flag of Christendom, we should instead ask ourselves what is the message of God to be read in this mass exodus from our institutional walls? Because I guarantee you, while these people may have abandoned church buildings and even their identities as Christians, God has not abandoned them, and God has undoubtedly not withdrawn his love from them--far from it. God is using them to reform his beloved church.

What the numbers don't tell you is that the vast majority of these "nones" (the shorthand term for the non-affiliated) would also describe themselves as "spiritual but not religious." These SBNR millennials have a sense of something greater than themselves, a sense of wanting to give back and belong to something greater (as shown by the large numbers dedicated to volunteerism), but this desire on their part is not being met and nurtured in churches, focused as most of them are on evangelism and conversion (i.e., "membership numbers") over discipleship and formation (active and ongoing engagement with and knowledge of the Christian life).

So yes, it's not necessarily a bad thing that these people have moved beyond our church doors. This is our opportunity to reform ourselves and become the church--the people--God wants us to be. Rather than luring the missing back in to "replace the aging generation" and make our numbers look more successful, we should figure out how to make our churches the types of places that will engage them on their core values and nurture the relationships they are already having with God. Or if we can't, then we need to get out into the streets and cafes and pubs ourselves and join them and see what needs of theirs are getting met in the culture that are not getting met in church. Modern culture supports individual growth, tolerance and giving back, among many other positive values. Are our churches supporting those same values (along with all the other stuff the culture at large can't provide)? That's certainly not the message millennials have been getting. What they've been getting largely is intolerance and hypocrisy. From the same article:

Opposition to same-sex marriage on the part of religious conservatives "is turning off so many people from Christianity," said Phil Zuckerman, sociology professor at Pitzer College who specializes in studying secularism. "We're seeing a backlash"


So where does that leave us who have pledged our lives to this apparently dying institution? As Jesus says numerous times in the Gospels, "Be not afraid." If the desertion of millennials from our churches means the church is dying, then Hallelujah. Revelation tells us that when the new earth is given to us, there will be no need for worship. (I saw no temple in the city, for its temple is the Lord God the Almighty and the Lamb. Rev. 21:22) Millennials are, perhaps, living into this coming reality already. I hope and pray that, rather than we church professionals throwing ourselves upon them to drag them back into our doors, we instead listen to them and listen to where God wants to bring us all: The Church, Christians, SBNRs, millennials. We are all headed for the same destiny in God's hands. Let's discern and embrace where God wants to lead us.