This is the eighth post in my series, Millennials Paving The Way, highlighting today's brightest Millennials who are empowering future generations to become change makers.

In recent elections, Baby Boomers and prior generations have cast the majority of the votes. But the ranks of eligible Millennial voters have been growing, and are now on par with Boomers. I recently partnered with Millennial Mix and Paradigm Sample to provide data insights into one of the largest voting blocs in the U.S. - Millennials.

The survey conducted August-September 2016 among eligible Millennial voters, provides a unique perspective on voters' feelings about the presidential candidates. A majority of voters from both camps have a negative perception of our political system. Nearly six-in-ten Clinton supporters (58%) and a staggering 80% of Trump supporters offer a concern about our political system. 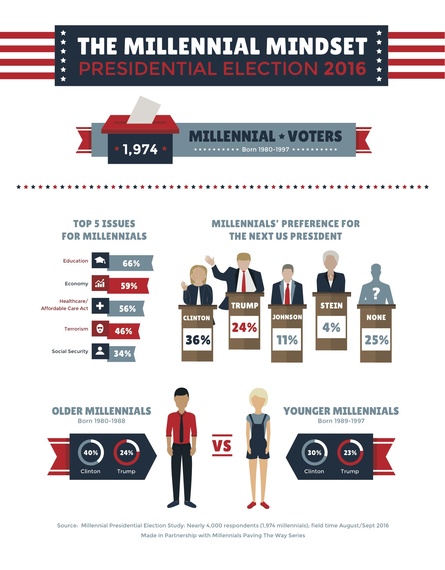 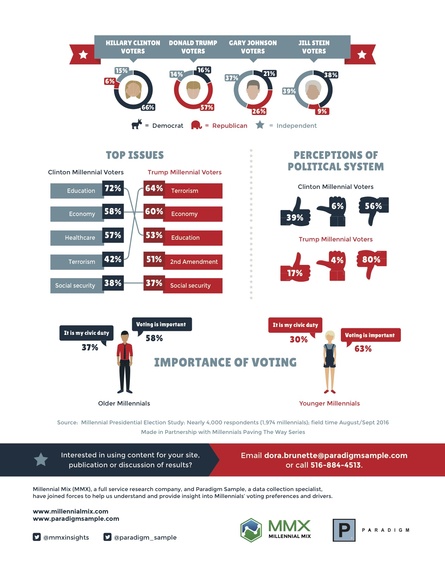 Overall, Millennial voters overwhelmingly say Hillary Clinton is the best choice for the 45th President of the United States over Trump (36% vs. 24%). Clinton also holds a wide advantage over Trump when it comes to older Millennials (those born between 1980-1988) - 40% of voters say Clinton would do a better job compared with fewer (24%) who say Trump would do better. By a 30%-23% margin, Clinton holds an edge over Trump as the candidate of choice among younger Millennials (those born between 1989-1997).

Millennial voters who support Clinton and Trump offer a variety of reasons why they do so, ranging from the candidate's position on education to the economy to fighting terrorism.

Among Trump supporters, 64% call terrorism very important to their vote. Other issues given high priority by Trump supporters include education (53%) and the 2nd amendment (51%).

Perhaps more importantly, is the significant rise in support for Libertarian nominee, Gary Johnson (11%) and Green Party nominee, Dr. Jill Stein (4%). Among Millennial voters who are registered as Democrats, 21% support Johnson, while 38% are in support of Stein. By every indicator, Clinton is losing some Millennial voters to the third party contenders. But why? Clinton has met voters that are to the left of the left who view climate change as a catastrophic threat and believe women should be able to make their own health-care decisions.

"According to our research, Clinton has a strong foothold with Millennials over the other candidate. The key factor will be to continue to motivate millennials over the upcoming days and get them to go vote on election day," says Sima Vasa, Advisor to Millennial Mix and Chief Evangelist Officer at Paradigm Sample.

An estimated 69.2 million Millennials are eligible to vote in November, according to the U.S. Census Bureau. This means the number of eligible Millennial voters is roughly on par with the Baby Boomer generation (69.7 million). But will they turn out to rock the vote?

If you haven't already, register to vote using this quick and easy online voter registration tool and don't forget to vote!