If you ask the average American about the upcoming Supreme Court case McCutcheon v. FEC, you'll probably get a blank stare. Here is the gist: an Alabama millionaire named Shaun McCutcheon is challenging a long-standing law on how much money individual donors can give directly to candidates and party committees. If Mr. McCutcheon wins his case, a single wealthy individual could give a total of more than $2.4 million to his or her favorite candidates, and another million-plus dollars to the party committee of their choice - for a total of 3.5 million dollars.

Mr. McCutcheon claims money is speech and that any legislative measure which hinders his dollar offends "liberty." But irrespective of the patriotic rhetoric, what McCutcheon is really suing for is the right to buy elections. Because 93 percent of the time, the candidate who raises the most money, wins.

While the now infamous Citizens United case gave billionaires and huge corporations the ability to give as much money as they want to super PAC's, which then spend money on candidates indirectly; the McCutcheon case would allow people to give those same multi-million dollar checks directly to joint-fund-raising committees, to help as many candidates as they like. As if our political process didn't already lack moral authority.

Unfortunately, Millennials and future generations have the most to lose with this case, as we will have to live the longest in a depraved political system.

When money equals speech, power and influence over government, Millennials are at a distinct disadvantage. We're cash-strapped: more underemployed and debt-ridden than any previous generation -- and certainly not invested in the stock market to get those good capital gains tax rates.

As the sons and daughters of Baby Boomers, we are also the largest generation in history, and particularly need a government that represents the emerging interests of the nation, not just the interests of rich people. For the record, Millennials are not anti-rich. We are just anti-rich people buying government.

So what do we do now? The only thing we have going for us is a demographic advantage -- formerly known as the most influential thing in a democracy.

But with midterm elections a year away and historically weak youth turnout in non-presidential election years, it's more urgent than ever before that we show up again -- this time to support Congressional members willing to stand up against money in politics. Because it's only a matter of time before demographic advantages become meaningless. If money continues to prevail, our voices will only be as strong as the size of our wallets. 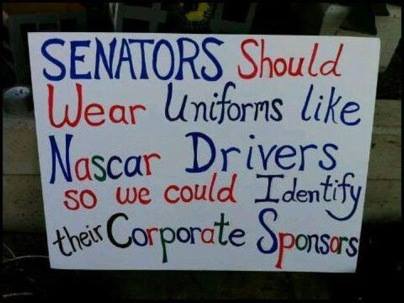 Matthew Segal is co-founder and President of OurTime.org, a nationwide non-profit organization that leverages online organizing, new media, and popular culture to enhance the political voice of young Americans.