What is it about Brooklyn street art that is so appealing that one would curate the opening exhibition of a museum with it? 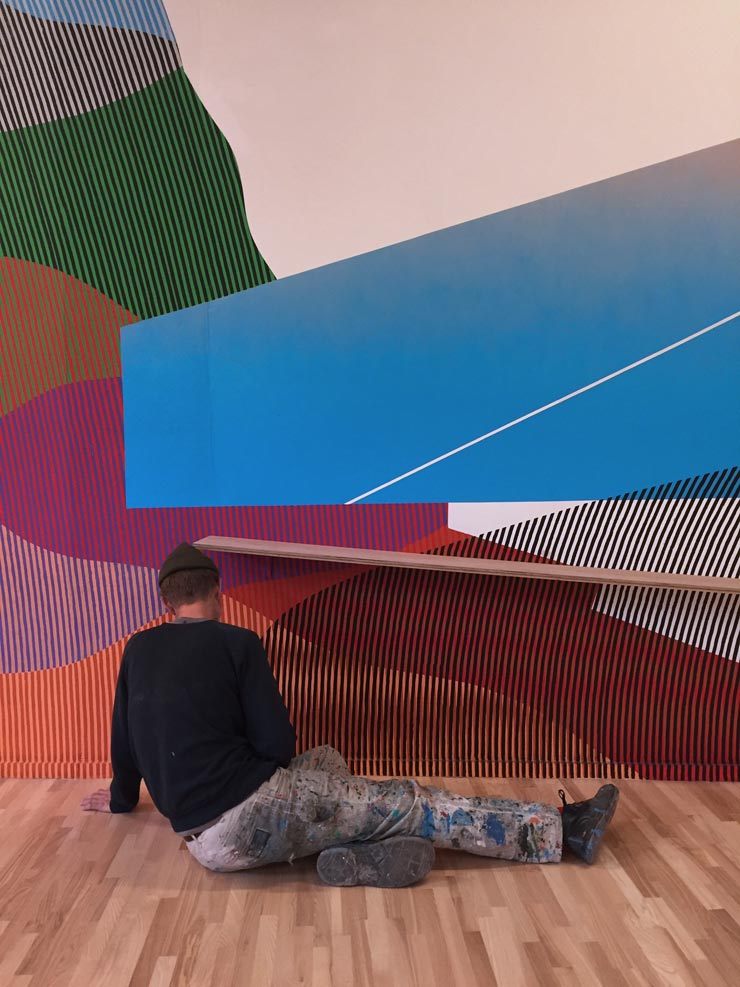 Obviously street culture has been mixing these influences together in a never-ending lust for experimentation; punk with hip-hop, skateboarding with tattoo, performance art with graffiti - for the past four decades at least. The folk tradition of cutting and pasting predates all our modern shape-shifting by centuries, but institutional/organizational curating often often has a preference for sorting street culture disciplines into separate piles.

With the inaugural exhibition "City Lights" MOMO, Swoon, Faile, and Maya Hayuk each bring what made their street practice unique, but with an added dimension of maturity and development. Without exception each of these artists have benefitted from the Internet and its ability to find audiences who respond strongly to the work with physical location a secondary consideration. Now as world travelers these four have evolved and refined their practice and MIMA gives them room to expand comfortably. 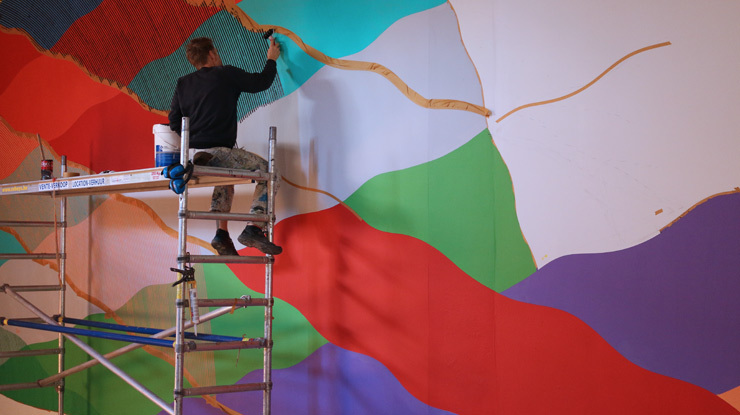 Rather than recreating the slap-dash chaos of street clash, and aside from the aforementioned drips and splatters in geometric neon hues by Hayuk, the museum setting is contained and crisply defined. Perhaps because of the cross-disciplines hinted at and welcomed, the overall effect is more contemporary than urban.

Hayuk's space, with its raised ceilings and stained glass window treatment is a hand-hewn modern chapel, borrowing a holy inflection and spreading it across to the urban art faithful who will make the pilgrimage to this new hallowed space.

On opening day (which was delayed by weeks because of the recent airport and transit bombing here) the crowd who queued on an overcast day down the block along the Canal in Molenbeek was undaunted by the wait and expectant. Housed in a former beer factory, the greater collection includes large installations by the marquee namesin the main spaces and smaller pieces ranging from Stephen Powers and Todd James to Piet Parra and Cleon Patterson in galleries evoking whitebox galleries. 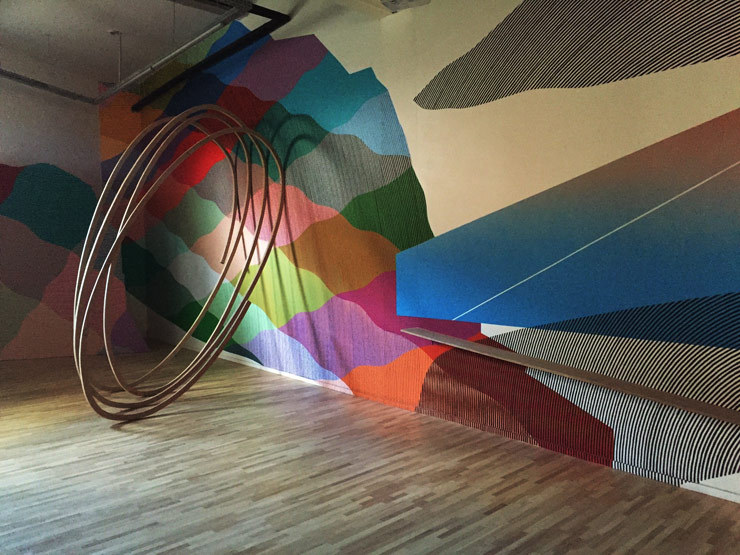 In precisely the ex-industrial part of town that is usually slaughtered with graffiti you can still see a variety of throwies and bubble tags floating above murky waters along the canal walls from the terrace of the 1300 square meter, 4 story MIMA. It's an oddly storied juxtaposition perhaps, yet somehow perfectly natural and modern.

If the popular imagination of "museum plus Street Art" conjures anything for you, it may present some kind of overture toward the continuation of the street into the formal space and vice-versa. Faile's two-color stencils and slaughtering of walls inside clearly connect to ones they have done over the last 15 years and that are currently on New York streets. Their huge prayer wheel assembled here was actually shown in the center of Times Square last fall with tens of thousands of tourists climbing it, sitting upon it, posing for selfies with it and spinning it, so the continuum is very much intact in that respect. 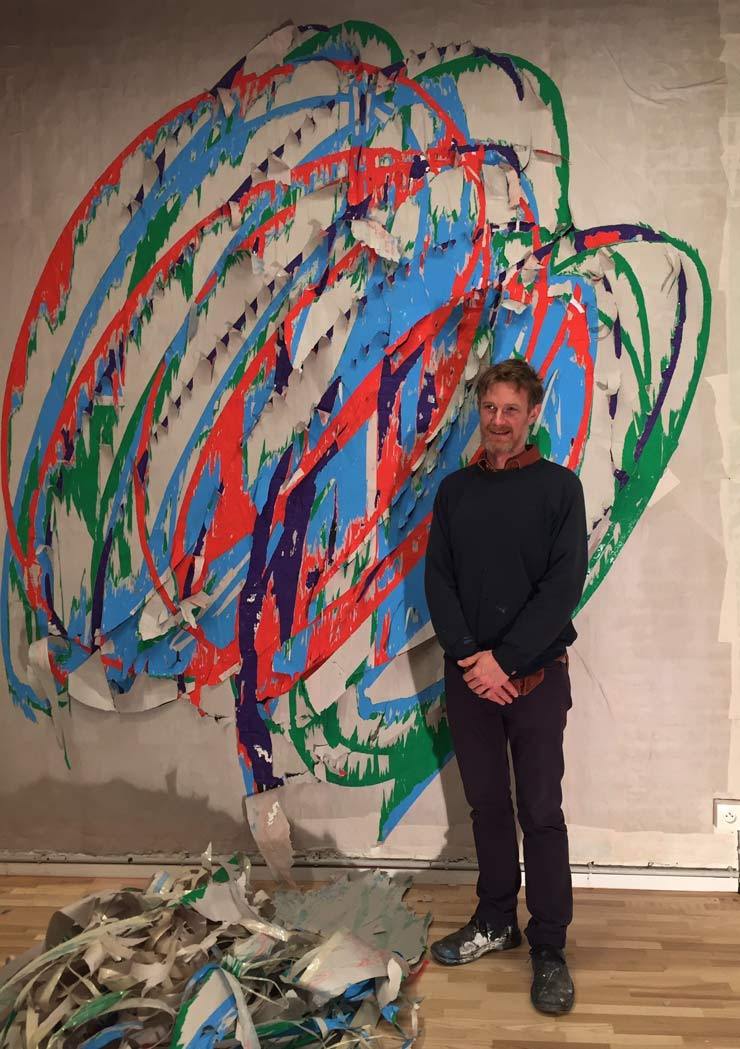 Similarly Swoon's wheat-pasted family of figures and her hand-cut paper patterns on mottled walls in the basement recall her work on street walls in Red Hook Brooklyn at this moment - as well as her periodic takeovers/installations inside choice areas of abandoned urban neglect through the years. To complete the dialogue at MIMA her hand-painted linotype prints are also wheat-pasted outside on Brussels walls near the museum, not slapped but placed with her customary consideration of context and proportion.

Ever the developer of new methodologies for painting, MOMO piled long strips of fabric in an overlapping circular pattern upon layered patches of color and unveiled the new work by gathering the invited artists and museum founders to watch as Faile's Patrick McNeil slowly pulled the "rope" outward, breaking sealed layers and revealing a heretofore non existent composition. To share and remember the birth process he leaves the tools of revelation in a pile before it. In this way MOMO recalls his street practice of conjuring and developing new tool-making and art-making techniques when bringing work into the public sphere. 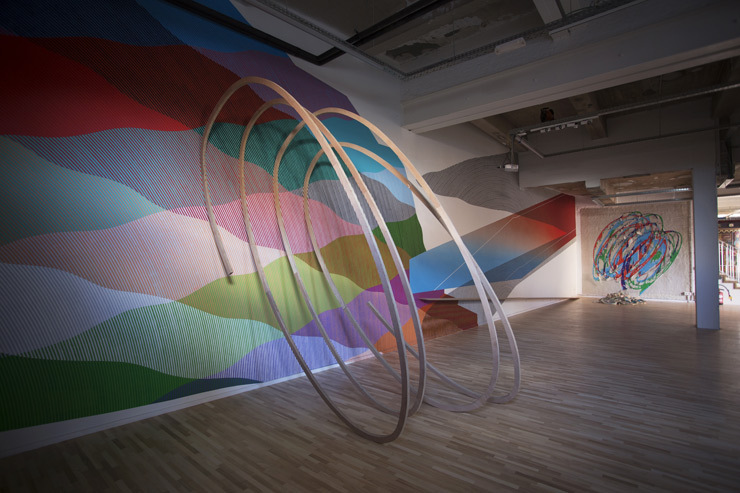 Aside from each evolving from the subcultures of the street in some capacity, the nature of the works transcend the partitioning that can define exhibitions, allowing the various practices to become the language of the culture. MIMA appears to have the physical space, as well as the psychological and philosophical space, to contemplate the multiplicity of voices that are flooding the streets and the Internet; forming subcultures and ultimately culture.

The City Lights in this case are as much on the various dialogues of the street as the street itself.

MIMA is the creation of four co-founders; Florence and Michel Delaunoit, Alice van den Abeele, and Raphaël Cruyt. The inaugural show is curated by van den Abeele and Cruyt and many of the artists shown in the extended collection here have a history and special meaning to the two through their venture the ALICE Gallery, which has as its strength a focus on art collaborations and exhibition with sculpture and installations. 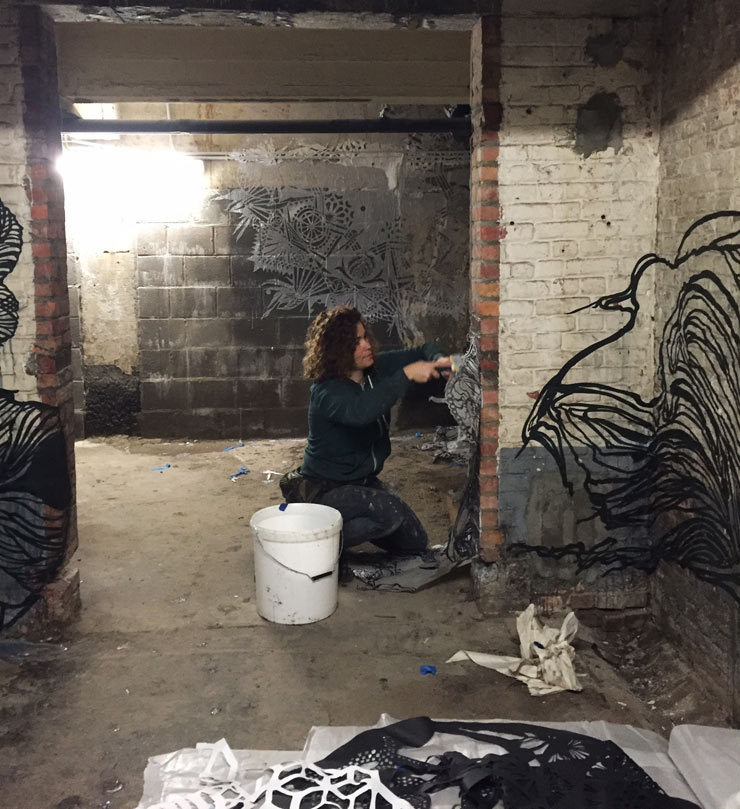 We spoke with Alice van den Abeele about the selection of these four artists for the opening, the intersection of Internet with museum curation, and the changing nature of our perceptions of culture. Here is an excerpt from our conversation

In your initial descriptions of the museum a focus is made on the uprooting of culture as it pertains to geography by way of the Internet during the last decade and a half. How do these artists represent this free-travelling cultural reality?

This cultural reality is easy to feel when you are in the CITY LIGHTS exhibition. The installations by Swoon, Maya Hayuk, FAILE and MOMO immerse you in different artistic worlds but share an extroverted language that is direct and playful. It is a language acquired with the street and with travel - a mixture you may call a "world citizen." 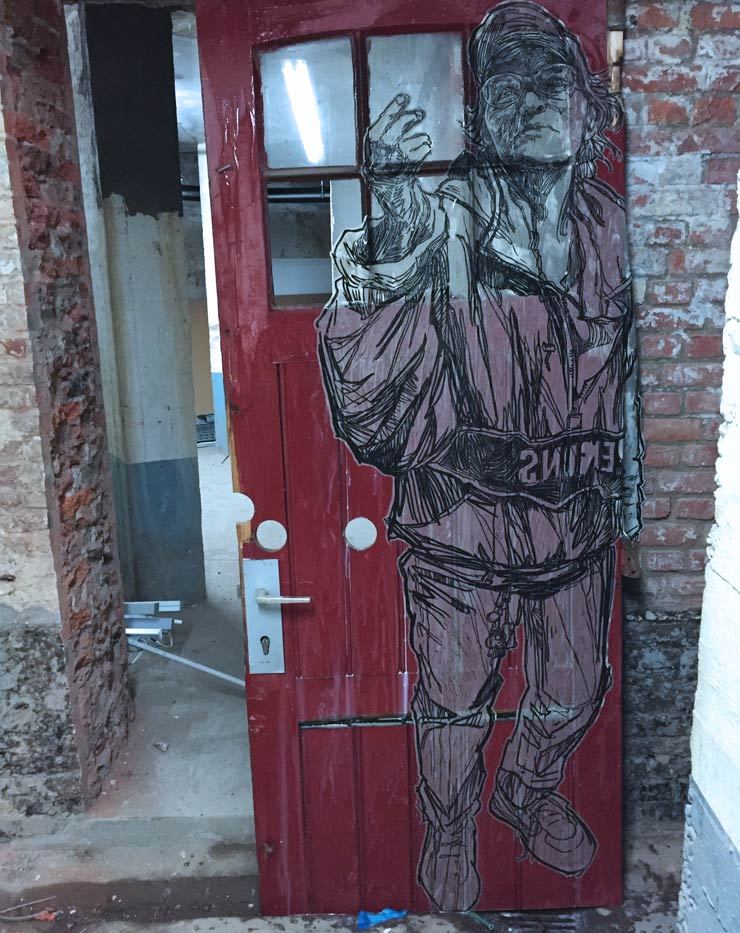 The museum addresses a range of subcultures that are directly or tangentially related to the street art scene during the last decades. Why is it important for us to consider these contributors?

Because of our history. With the communication revolution and the relative low cost of Internet connectivity, the beginning of the millennium brought changes to our perception of the world. A feeling of being a citizen of the world is developing in the West - by which I mean to say there is a cosmopolitan attitude that makes us more empathetic, collaborative, and cross-cultural.

For artists this means there is a greater mobility between creative fields. The artist can easily be a skateboarder, a designer, a musician, a graffiti artist and they can also exhibit in a gallery or a museum. He or she adapts to different creative contexts and their identities are many - not limited to being a 'street artist" or "a musician". The subcultures mix easily together. Lust look at the New York art scene at the time of the Alleged Gallery for example.

On the other hand, society moves it through the prism of the Internet today and selects artists that reflect a new thinking. The values that define the artist's behavior in the street are close to those that define our behavior on the Internet: Empathy, the right of access rather than ownership, a collaborative spirit, authenticity, and a cross/hybrid culture.

Somehow, the street work embodied physically very early this paradigm shift that was occuring in our society, this new way of perceiving the world. That's the story the MIMA wants to tell through the exhibitions and the works in the permanent collection. We are living through a revolution that is slowly rewriting the history of art "bottom up" - which may have a thousand faces. 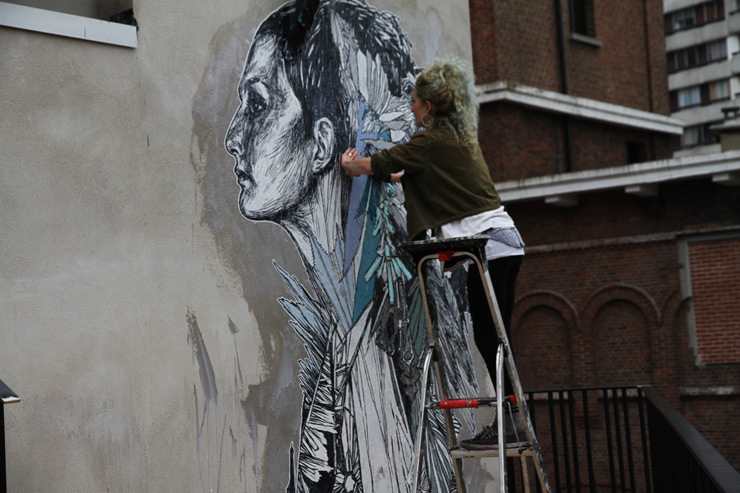 Is it important to examine these subcultures separately or is it more relevant to see what their combined influences are producing for the world as aesthetic movements, social movements?

Cultures are not compartmentalized. They mix to reinvent themselves. Besides, don't they all become mainstream? In a world of continuous flow of information we should beware of categories and labels - which are often more commercial than artistic. As I said earlier, subcultures today are of great interest to society because they can inspire in us a common ideal - better than our politicians. 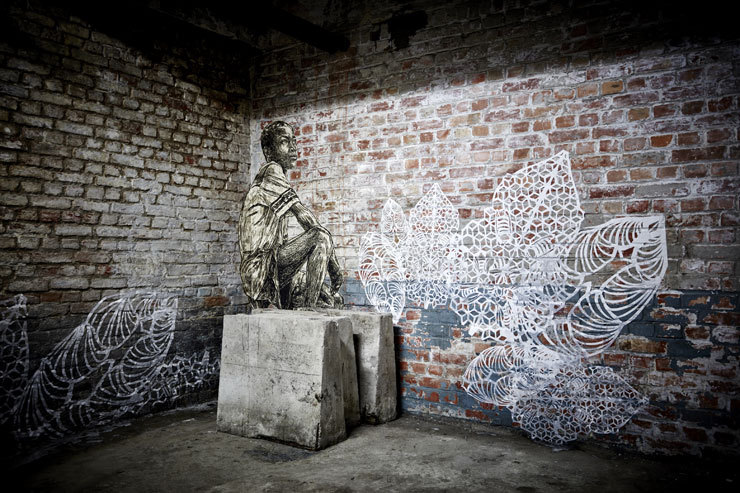 As a group, these inaugural artists have an association in our minds with early-mid 2000s New York street art culture. Can you talk about the significance in broad terms of your choice of these artists for your initial exhibition?

Initially, when we visited the MIMA building in ruins, we immediately imagined an intervention by Maya Hayuk in the room called The Chapel. We know Maya really well because we have had the pleasure of working with her for such a long time. With that first intention, we thought that it would be great to have artists who know and appreciate each other, share a common history, and to create a synergy between them!

This combination of talent and affection has produced a unique exhibition, full of spirituality. More generally, the New York scene of this period is particularly rich for us and it was a good matrix to introduce the vision of the MIMA to the public! 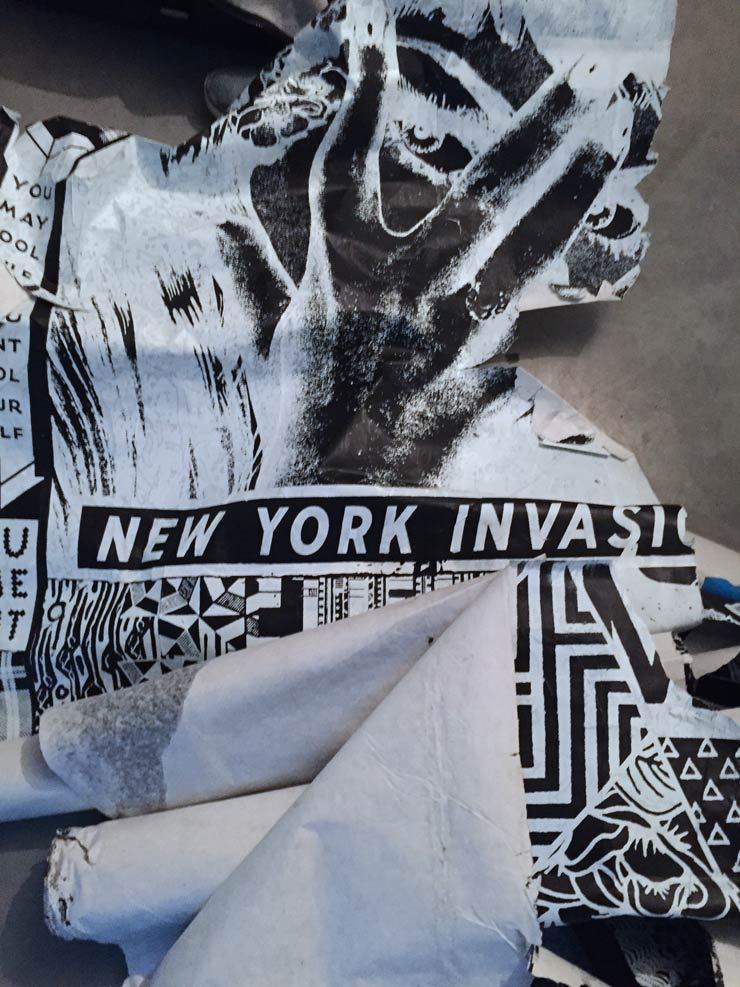 What sort of artists or influences do you envision for near future exhibitions?

It is certain that we will continue to work with artists in the same vein as those that are present in the permanent collection. At the same time we want to leave the door open to the future for the unknown and to surprise ourselves for the fun of it. 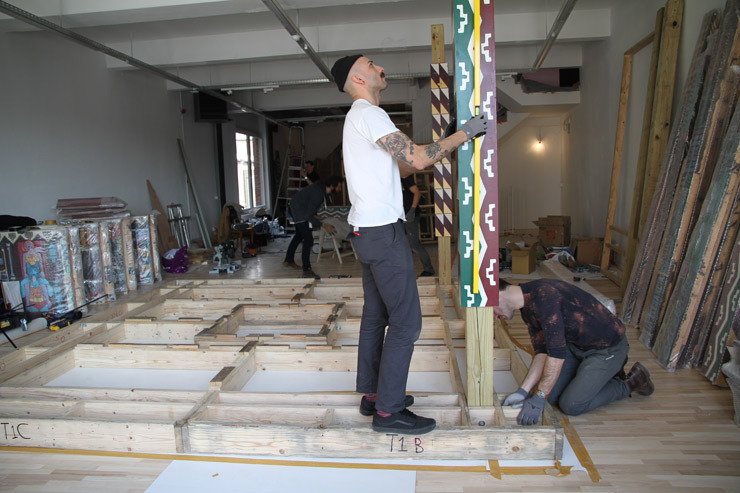 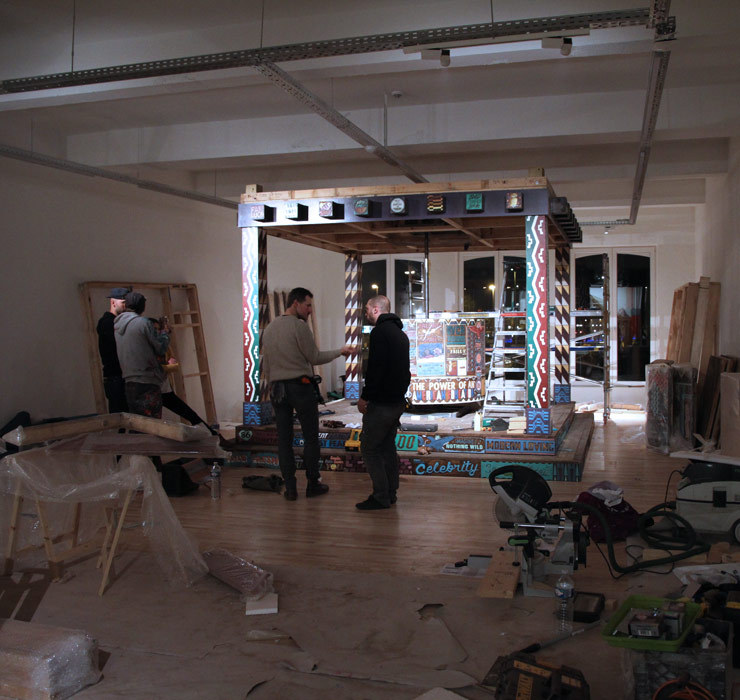 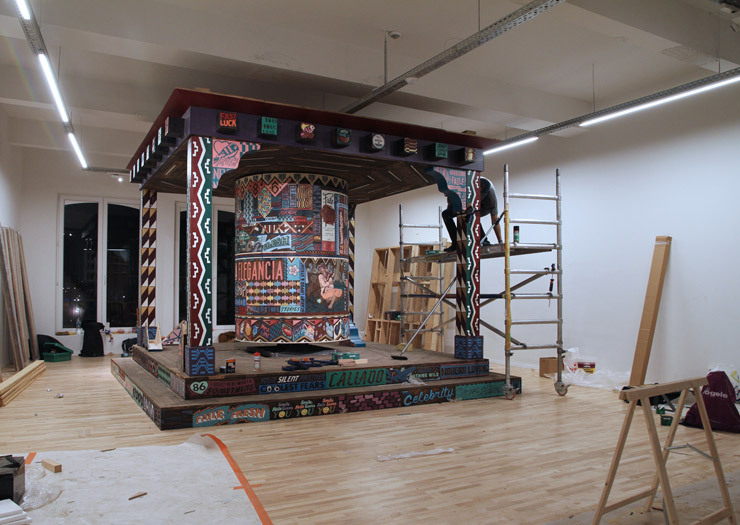 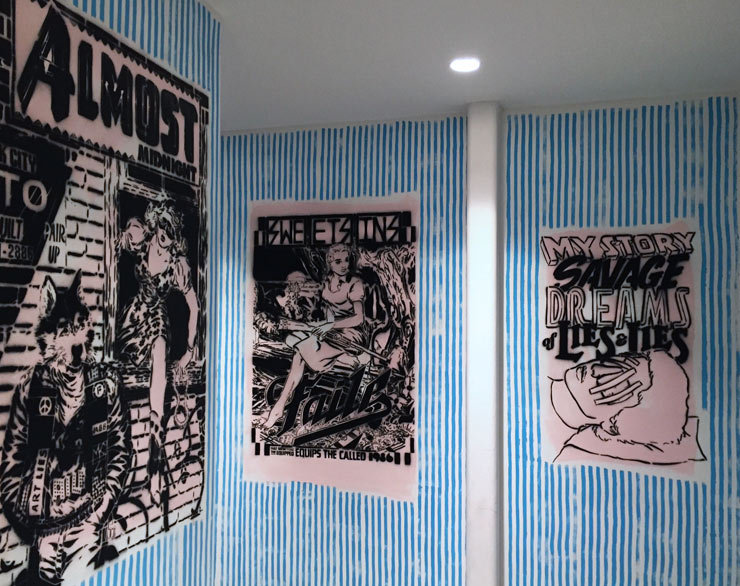 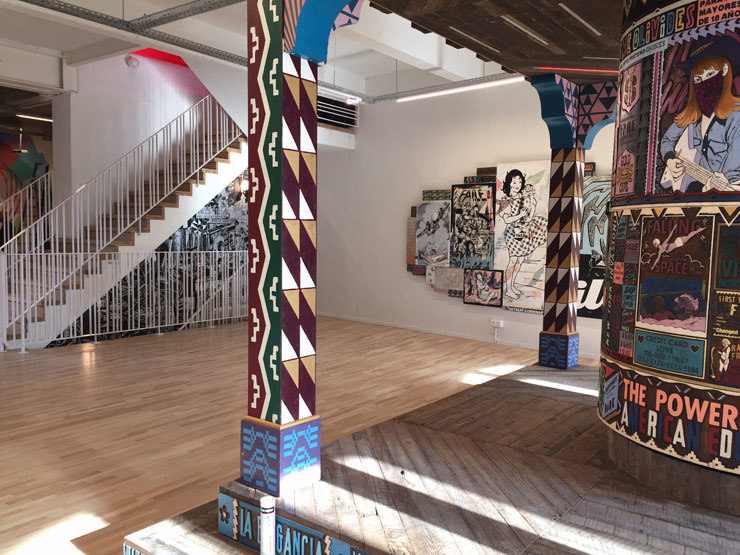 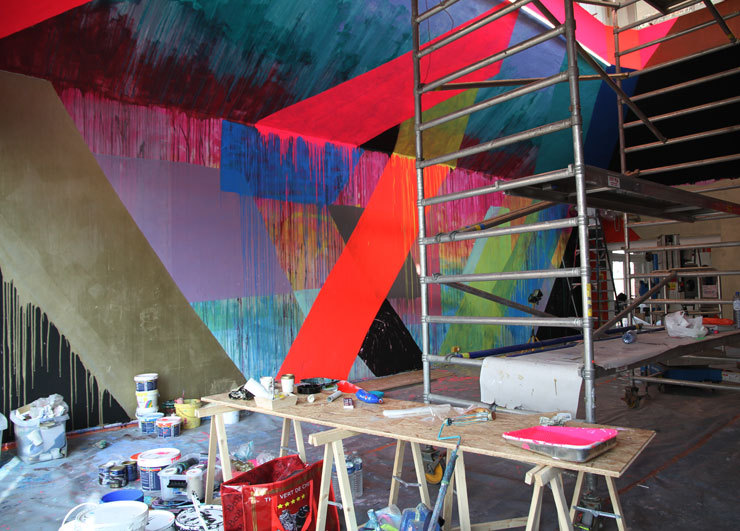 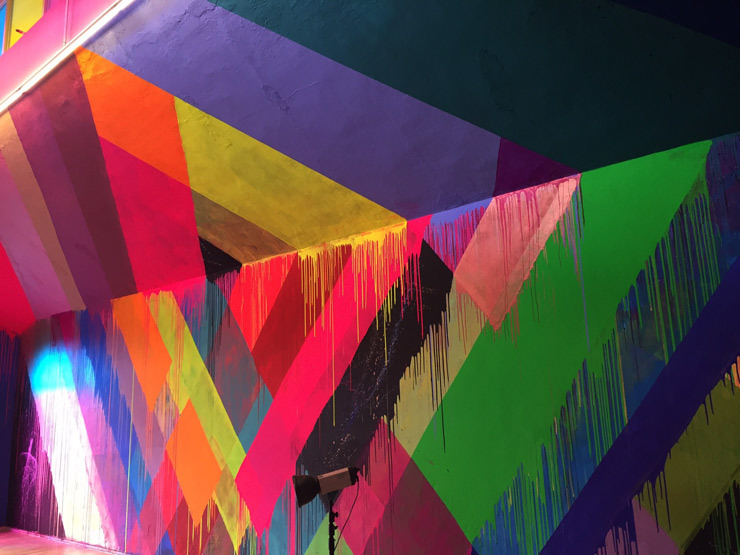 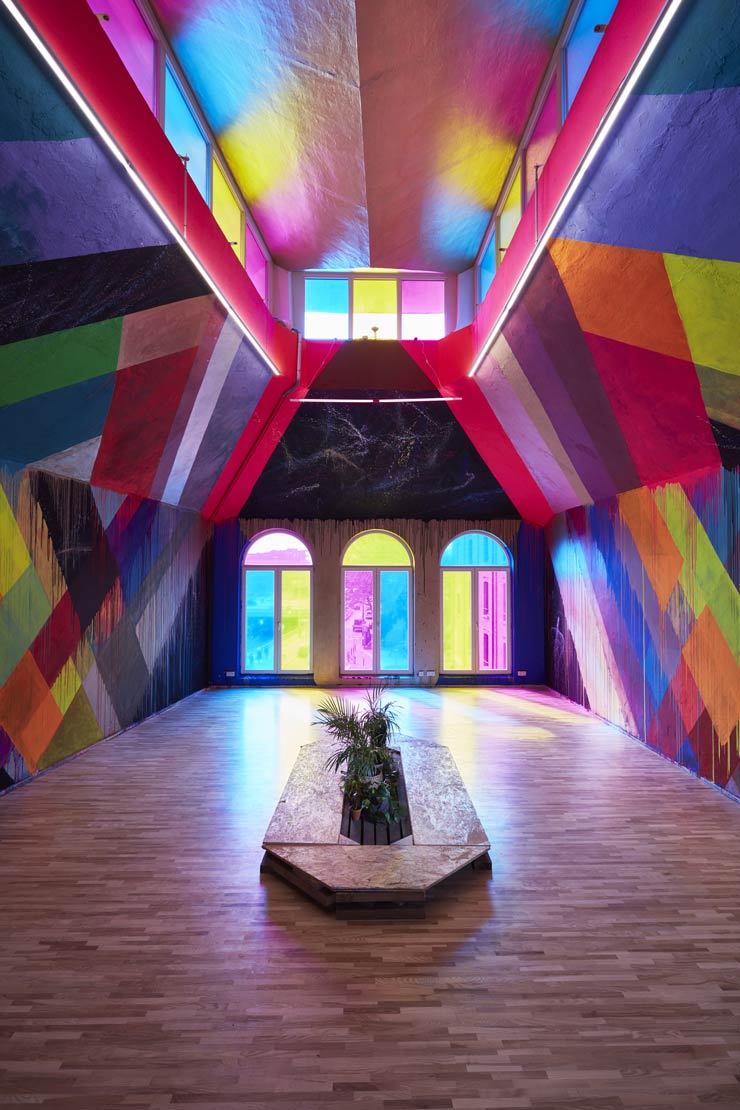 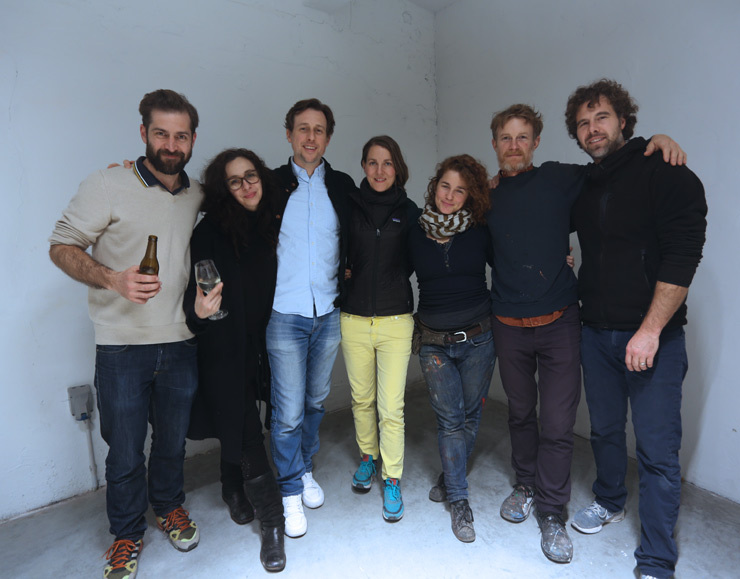 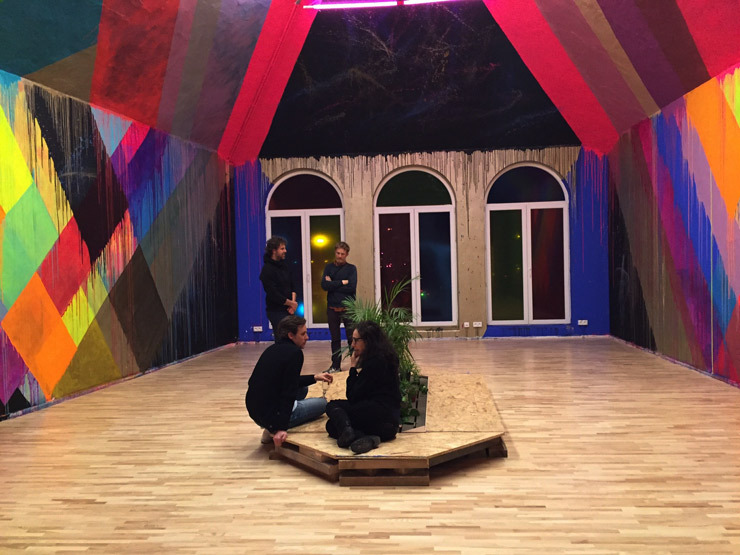 The MIMA Museum "City Lights" inaugural exhibition in Brussels, Belgium is currently open to the general public and will run until August 28, 2016. Click HERE to learn more about MIMA.