The past few weeks have seen many college campuses riled by student protests. And although this erstwhile student activist welcomes this rise in student engagement, albeit narrowly focused so far, one also wonders how to also get the younger generation involved in our electoral process.

As we approach another general election in 2016 we once again face the continuing discussion of whether to make it easier (usually a Democratic initiative) or more restrictive (generally a Republican strategy) to vote. However, and more importantly for the countries democratic health, voter turnout in the general elections of 2014 was the lowest since WWII. Just 36.4% of the voting-eligible population cast ballots this past November, although admittedly it was a midterm election, which generally have lower turnout than term presidential elections.

Despite these dismal voting numbers, young citizens go to the ballot box in even lesser proportion than older voters. According to an analysis by The Center for Information & Research on Civic Learning and Engagement (CIRCLE) at Tufts University, only 19.9% of 18 to 29-years old cast ballots in the 2014 elections, the lowest youth turnout rate ever recorded in a federal election. The Center attributed this decline to a number of factors. Many states have made it more inconvenient to vote, for example by implementing a requirement for photo IDs with restrictive lists of acceptable identification, shortening voting times, and repealing laws that had allowed people to register on the same day they voted. In addition, the increasing use of analytics, the greater emphasis on big money, the decline in grassroots engagement, and the increasing frequency of non-competitive races are focusing most of the attention (and money) on the likely voter and not on getting out the new, or less likely, voter.

I also argue that there is a growing disconnect between our congressional representatives and our youth. Although the 114th Congress is the most diverse ever, with non-whites (including blacks, Hispanics, Asian/Pacific Islanders and Native Americans) making up 17% of the new Congress, according to a Pew Research Center report, this is well below these groups' 38% share of the nation's total population. And younger voters are even more diverse than older voters, with another CIRCLE analysis estimating that in 2012 only 61.5% of eligible voters ages 18-29 years old were non-Hispanic White compared to 73.6% of voters 30+ years old.

And no, it's not that young people are lazy or apathetic. They are actually very concerned about the future and are quite involved, many say more involved than previous generations, in their communities, volunteering and trying to ensure their voices are heard. But they seem to have less faith and give less relevance to the state. An unfortunate state of affairs no doubt.

But to be fair, Millennials can barely remember a time when jobs were plentiful, budgets weren't being cut, and Washington wasn't gridlocked. More than a third of them live with their parents. Many have vast college debts. They don't trust government to do a good job for them or the world. A recent Reason-Rupe Public Opinion Survey found that 66% of 18-29 year olds felt that government is 'wasteful and inefficient'. Less we think this is just youth speaking, this is significantly up from 42% identified by a similarly worded Pew Research Center survey in 2009 (Figure, from The Reason-Rupe Spring 2014 Millennial Survey). So how can we expect them to go out and vote for an institution that they have lost faith in? And yet, for their sake and all of ours, we need to find ways to engage this alienated generation. 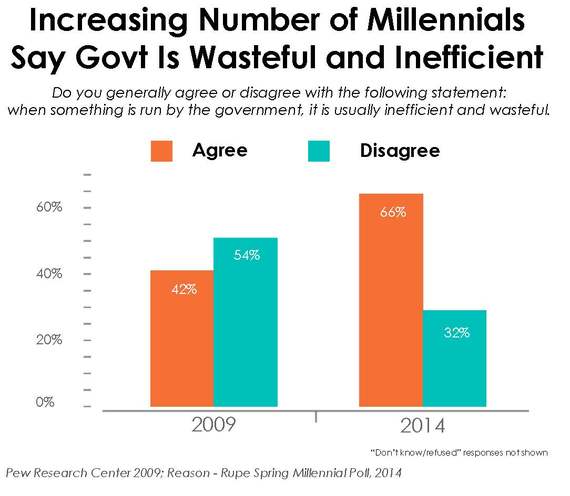 One way is to better ensure that our institutions of education, both K-12 and higher ed, have the resources and the mandate to more fully educate our youth regarding the need, the privilege, and the responsibility of voting (and other forms of civic engagement), as suggested by CIRCLE. Some of this is already being done, but we clearly need to do much more.

In addition, we need better strategies to engage and reach out to our youth. Possible strategies, as suggested by the New Millennium Young Voters Project of the National Association of Secretaries of State could include young voter civics education outreach programs funded by the state or in partnership with local or county election offices, laws which would allow for poll workers or election day volunteers between the ages of 16-17 years-old, increasing the use of social networking sites to reach this age group, increasing the use of online tools for educating and empowering voters, and offering the opportunity for online voter registration.

Youth voter registration rates are much lower than older age groups' rates, and as a result, facilitating the registration process is one potential step to closing the age-related voting gap. For example, new laws passed in Oregon and California, make it easier to register to vote and in fact making it more difficult to not register to vote. State residents will soon be automatically registered to vote when they get or renew a driving license or state identification card. Now, instead of "opting in" to vote, residents in these states will have to "opt out" of registration. Since young people are most likely to register at the department of motor vehicles, whereas those 30 and older were the most likely to register at a town hall or county/government registration office, these mechanisms have the potential of significantly closing the youth voting gap.

Finally, we also may want to consider a more radical idea. I was recently in Uruguay visiting my 105 year old grandmother who, as she was lying in her bed dutifully recounting her childhood, turned to my aunt whom she lives with, to remind her to not forget and notify the electoral commission that she would not be able to vote in the upcoming elections? What? She actually was doing the reminding? At 105 years old? And you had to get an excuse for not voting? Exactly.

In Uruguay voting is not only a civic responsibility, it is compulsory. Meaning if you want to retain your rights as a citizen or if you want to retain your ability to receive payments from the states (say your pension) you need to have proof of voting. Twenty one countries currently have some form of compulsory voting, including countries as diverse as Australia, Luxembourg, Belgium, Singapore, Naura, Congo, and Peru.

We all recognize that citizenship in the US is a privilege, and that this privilege is associated with both rights and responsibilities. We have many wonderful rights, which we often take for granted. And we have responsibilities. Responsibility like paying taxes. Or educating our children, at least through the 12th grade. And perhaps we should have the responsibility of voting. For how can we call our society a democracy when the voices of less than 40% of eligible voters determine our leaders, and consequently our future? I know this is a long-shot. But being part of a true democracy requires participation. Everybody's participation. And maybe it should be obligatory.

As we strive to educate the next generation of leaders, imbedding in them a sense of community and civic obligation, and appreciation for democracy and the democratic process, is essential. And ensuring that they get out and vote will be even more critical. Because they soon will be inheriting the future that is being elected today.