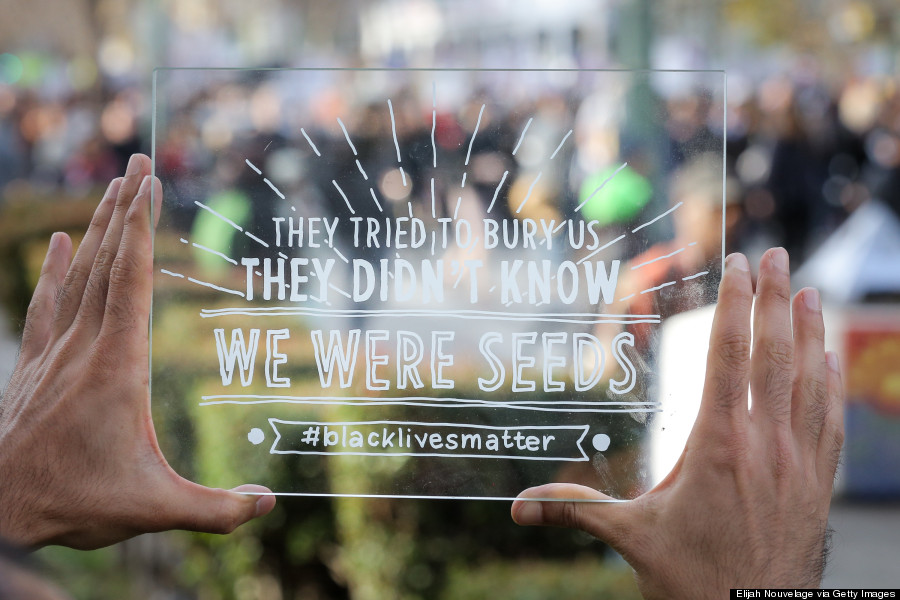 As thousands of people rallied in the nation’s capitol and demonstrated through the streets of New York on Saturday, protesters in other cities across the country also held events of their own to denounce racial injustice.

Chants of “Hands Up Don’t Shoot” and “I Can’t Breathe” were heard in cities from Boston to San Diego as protesters spoke out against police brutality and racial profiling.

While the march in Washington had a significantly large turnout, with an estimate of more than 25,000 protesters, cities including New York, Chicago, Oakland and San Antonio each had significant participation from protesters who took to the streets in solidarity.

In Oakland, California, a city with a long history of racially charged police violence, thousands of people marched to the Alameda County Courthouse. The peaceful demonstration began near City Hall at a corner unofficially named for Oscar Grant, a 22-year-old unarmed man who was fatally shot in the back in 2009 by a transit officer who later claimed he mistook his gun for a Taser.

On the crowded steps of the county courthouse, Grant's mother, Wanda Johnson, addressed the mass of demonstrators. Grant's name is often invoked at the nearly nightly protests that have taken place in Oakland and nearby Berkeley since Nov. 24, when a grand jury in Ferguson, Missouri, did not indict officer Darren Wilson for shooting unarmed teenager Michael Brown.

"We want officers held accountable. We want officers to be able to feel the pain just as we feel it," Johnson said. "We got to stand up to the police brutality in our nation." 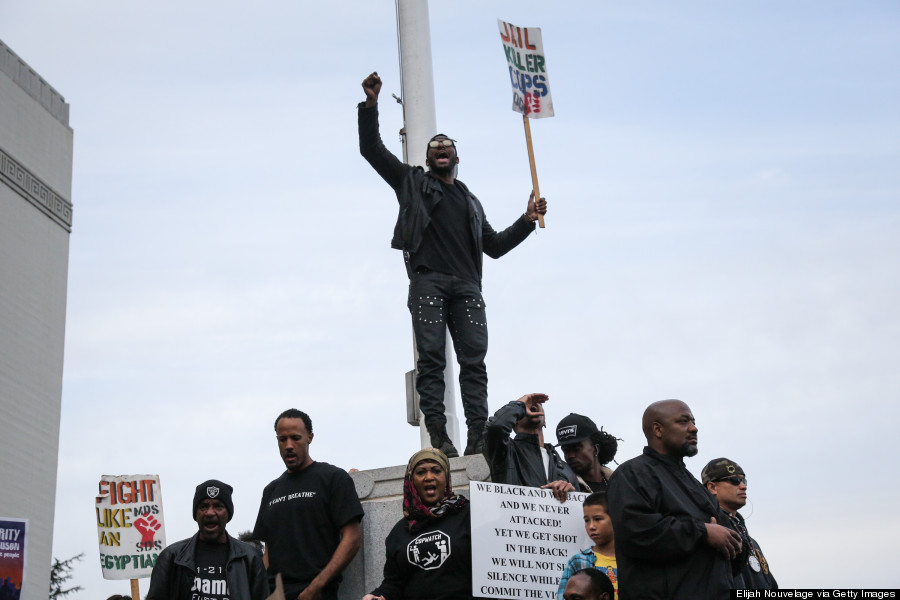 The mother of 15-year-old Derrick Gaines, who was killed by a South San Francisco police officer in 2012, also spoke to the crowd from the courthouse steps.

"Where are the teenagers? Where are the young people? We are here for you," said Rachel Guido Red to cheers. "This is a wonder, wonderful protest for a horrible, horrible cause."

Vichea Harvey, who lives in nearby Richmond, brought her 15-year-old nephew, Estoban Torres, and spoke to HuffPost about fearing what might happen if he gets accosted by police.

"I have African-American children, nephews and nieces, and they have been harassed by police," said Vichea Harvey, 48, a caterer and Laney College student. "I won't let him outside except to go to school," she said about Torres.

Previous Bay Area protests have occasionally turned violent, and hundreds have been arrested. That worried Harvey, but not enough to discourage her from attending her first demonstration.

"If we all be afraid, nothing will get accomplished," Harvey said. 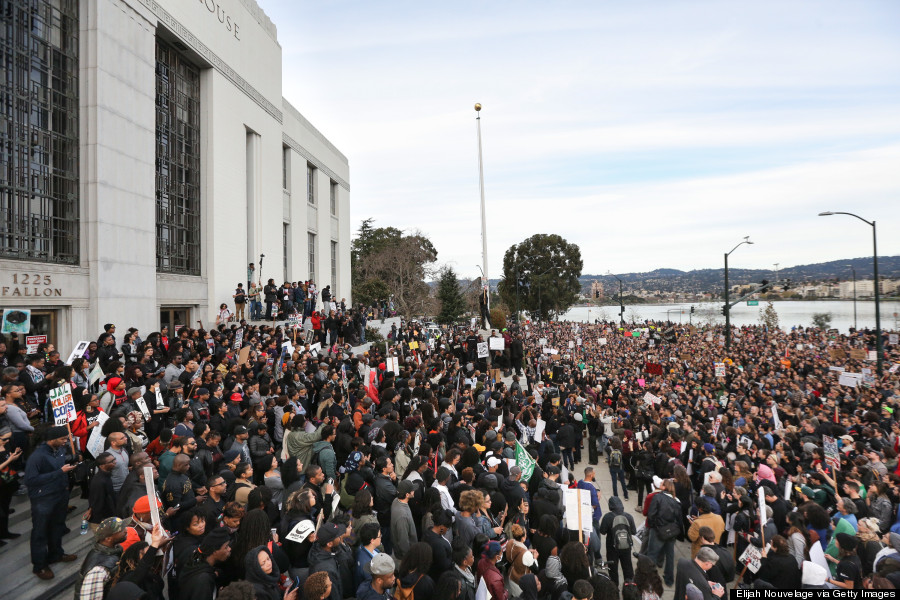 Many black people in the crowd spoke about being singled out by police.

"I get harassed by cops. They stare at me. I get followed. I don't feel like a citizen," said Tristan Johnson, 22, an Oakland resident who attends the University of British Columbia. He said Saturday's demonstration made him optimistic. "This is the beginning of a movement," he added. "Today is not the end-all."

Norm Berzon, 71, a resident of nearby Emeryville, said he's been politically active since he belonged to the Students for a Democratic Society in the 1960s. "The shit that's going on is worthy of protest," he told HuffPost. "There are good cops and there are bad cops. But they all have a license to kill, and the bad cops are using it."

After the official event broke up around 4:30, a large crowd of protesters moved back to the starting point at 14th Street and Broadway, where they disrupted traffic.

In Los Angeles, on the corner of Hollywood and Highland, 50 protesters circled four intersections, disrupting traffic and chanting "no justice no peace, no racist police."

The group was larger than one that appeared last week, according to 28-year-old Sharlene, a recent transplant from New York.

"Everyone has a stake in this -- everyone should be out here," she told The Huffington Post. She talked about her brother, "the best kid you could imagine," who has been stopped and frisked seven times by local police.

Nearby, hundreds marched from Berkeley to Oakland while more than 1,000 rallied outside the Oakland courthouse. Meanwhile, in Boston, state police arrested 23 protesters Saturday afternoon, charging each of them with disorderly conduct. 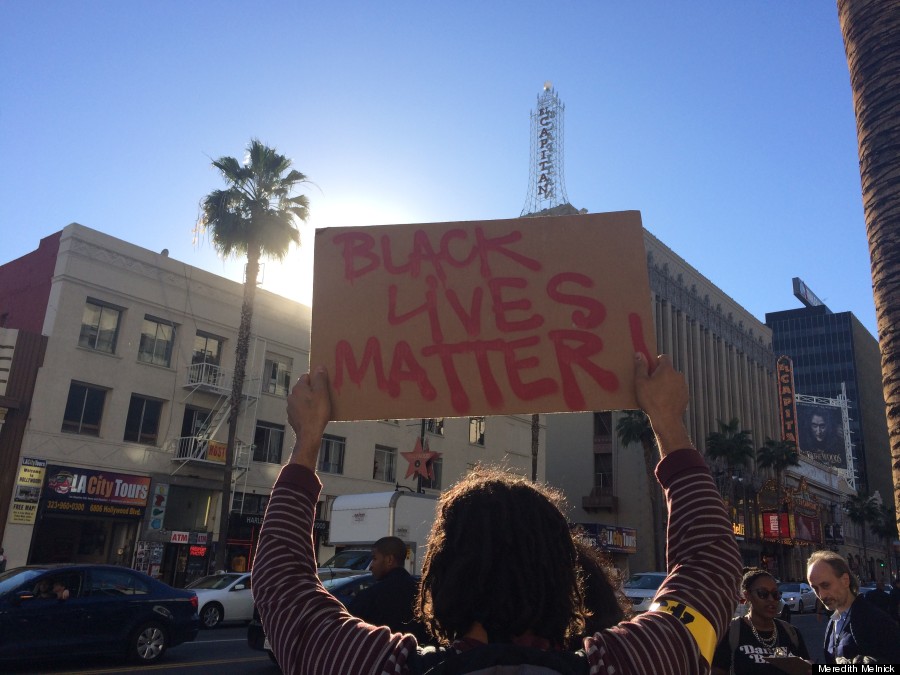 Crowds across the nation consisted of people of all ages and demographics, reflecting a diversity praised by many.

"At previous protests for other similar causes, it's been only black faces," Los Angeles resident Aiesha Spires, 27, told The Huffington Post. "I appreciate the diversity and I appreciate that [the white allies] are taking cues from us and not taking over."

Consensus among several protesters in Los Angeles was that awareness of racial injustice and accountability of police brutality were the salient needs.

That sentiment was shared among the tens of thousands of others who expressed the same concerns throughout the country -- and as portrayed in images from protests across America. Take a look at some of them below: