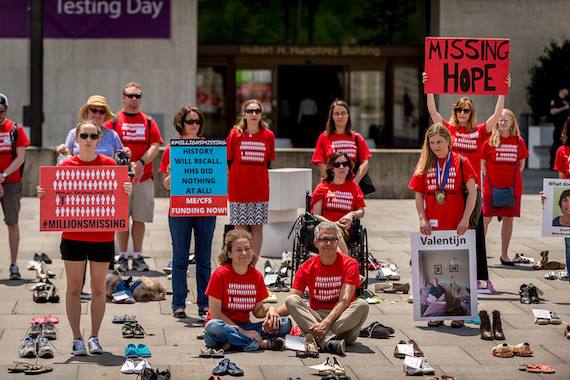 A hidden epidemic has swept the globe -- and your neighborhood is not immune. In its wake are millions of lives ruined. Its silent victims are all ages, from all backgrounds and in every state across America: Up to 99,000 in Illinois, 152,000 in New York and 211,000 in Texas. There is no prevention, no treatment and no cure for this barely acknowledged disease that gets barely any government funding.

In total, there are 1 million to 2.5 million in the US, 17 million worldwide, whose lives have been devastated due to the most serious neuroimmune disease you never knew existed: Myalgic Encephalomyelitis (ME).

Mononucleosis is no big deal, right? In my early 20s my roommates and I were felled at the same time. We three went down like we'd been hit by a Mack truck that then rolled backwards. One month later, my roommates returned to work and college. I never returned to a normal life.

A short term virus was my entry into long-term disability. The ME onset stories of the up to 52,000 patients in Massachusetts, the 69,000 in New Jersey and the 98,000 in Pennsylvania likely sound eerily similar to mine.

When ME hits, an individual becomes so physically impaired, so weakened, they often have to quit school or abandon their career: 75% of patients can't work. Many can't be social or help with their families because that takes energy they do not have. A quarter of these formerly active yet now "missing" members of society are homebound or bedridden. Some need 24/7 care. Some are too weak to feed themselves.

My blood tests showed that the mono had passed, yet my body felt like it hadn't. I barely had the strength to brush my teeth. The days went by, then a year. When I finally managed to return to my previous activities, my recovery was only relative. I was constantly pushing against a wall of exhaustion.

Until one day, I couldn't push. And now I spend my life tethered to my bed. This November I observe my 27th "sickaversary" -- decades of illness, bone-penetrating exhaustion and cognitive impairment, coupled with the classic characteristic of ME: any type of exertion, physical or cognitive, results in a relapse.

Year after year, I -- and the 5,000 patients in Washington D.C. and the 55,000 in Seattle -- hoped the government would use some of its $30 billion National Institutes of Health (NIH) budget to research this disease. Instead, NIH essentially ignores ME. Annually, NIH gives a paltry $5-7 million to research ME/CFS. (CFS stands for "chronic fatigue syndrome," a government imposed name that trivializes this serious disease.) Instead, based on prevalence and disease burden, ME should be funded $250 million per year.

One wonders why ME research is funded at the same low level as hay fever research, when hay fever does not permanently ruin your life. Multiple sclerosis, a similar disabling neuroimmune disease but with half as many patients as ME, get about $94 million a year.

The government's perpetual lack of investments turns off academic researchers and pharmaceutical companies from studying ME, and that has resulted in where we are today: No generally accepted diagnostic criteria for ME and no FDA-approved treatments. Patients and their families are left to flounder -- and suffer -- on their own. The government would never think of abandoning people with multiple sclerosis or Parkinson's Disease.

Making matters worse, much of the research the government did conduct contributed to psychologizing and delegitimizing ME patients. In fact, the CDC still uses that misleading research to (mis)educate the public and doctors about the disease. CDC does this even as statisticians and noted scientists debunked the PACE study, a study that was at first internationally lauded but is now discredited. PACE had cemented the false idea that ME is psychological and patients can recover with exercise. The CDC must now disavow PACE and disseminate accurate medical education material, so doctors don't suggest treatments that can permanently hurt patients, such as exercise.

So for the last 30 years, advancements in this disease have been stagnant, frozen in time, leaving patients to suffer alone. Our one glimmer of hope is recent privately funded research that appears to have found a biomarker: A groundbreaking discovery shows that ME patients have significant metabolic deficiencies that prevent their very cells from functioning properly. This is research our government should have funded a long time ago.

That is why September 27th is a #MillionsMissing Day of Action for ME patients and their families. We hold (or, by the time you read this, we already held) demonstrations in 12 cities across America. In fact, they will be held in cites of all the states mentioned above: Atlanta, GA; Boston and Northampton, MA; Chicago, IL; Dallas, TX; Lansing, MI; Pittsburgh, PA; Morristown, NJ; New York City, NY; San Francisco, CA; Seattle, WA; and Washington D.C..

We are drawing attention to the millions of dollars missing from federal research into ME, the millions of health care professionals missing training on how to accurately diagnose and treat ME and the millions of patients missing school, a career and time with family and friends. Most are so sick they can't even attend our demonstrations in order to advocate for their own lives.

I'm going to do my best to make it to the one nearest me.

State prevalence numbers are based on the NAM national prevalence, and are found here state by state.

Rivka Solomon (@RivkaTweets) is a writer and ME advocate helping to coordinate the MillionsMissing demonstrations. She is writing a book about her 27 years with ME. A shorter version of this article first appeared on InsideSources.com.

Rivka is a MA based writer and organizer