Playing out this month in Queens is a debate about how best to protect two artifacts from a more pastoral past. For several decades, a pair of centuries-old millstones, once used to grind wheat to fine consistency, have been embedded in a traffic triangle in Queens Plaza, the nexus of two major elevated lines as well as the junction where Northern and Queens Boulevards meet.

In 1650, Dutchman Burger Jorissen constructed a grist mill that today would be on Northern Boulevard between 40th Road and 41st Avenue. The mill existed on the site for about 111 years, until 1861 when it was razed by the Long Island Rail Road. The Payntar family by that time owned the mill property (40th Avenue was called Payntar Avenue until the 1920s) and had placed millstones that had been shipped in by Jorissen around 1657 in front of their house. The Payntar house was razed in the early 1900s. When Sunnyside Yards, Queens Plaza and the Bank of Manhattan and the elevated were constructed, the millstones were fortunately preserved and embedded in the traffic plaza. 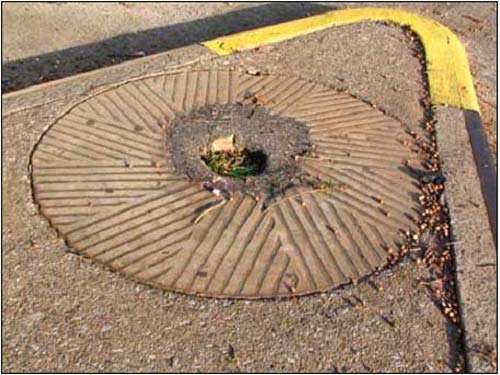 One of the Jorissen millstones. Over the decades wear and tear has cracked and damaged it.

The traffic island where the millstones are embedded has been converted into a staging area for heavy construction equipment. Historians fear for the condition of the millstones, already compromised by years of wear and tear. One of the stones has been removed from the plaza and crated, while the other remains in place. A representative from the city Economic Development Corp, which is reconstructing the plaza, maintains that the stones will eventually be displayed in a 1.5 acre green space at the northeast end of Queens Plaza. But can they survive the manhandling they are receiving now?

Two Queens civic and historical organizations are debating what best to do with the millstones. The EDC holds that the stones are doing all right where they are now, and should not be moved at all until the reconstruction of Queens Plaza is completed, and the Dutch Kills Civic Association supports that view.

Meanwhile, the Greater Astoria Historical Society and Newtown Historical Society prefer that the two millstones be removed from the traffic plaza to a temporary space at the GAHS headquarters at 35-20 Broadway in Long Island City or a similar space elsewhere, where they can be inspected by the public and available for historical research, and then reinstalled at a permanent site with adequate protections from traffic, vandals and weathering, with informative signage.

The city's track record in preserving historic structures has been spotty at best. Philip Johnson's Tent of Tomorrow, the NY State Pavilion in Flushing Meadows-Corona Park, is a rusted ruin. On the Manhattan side of the Queensboro Bridge, trolley shelters and lampposts going back to the bridge's earliest days mysteriously disappeared decades ago, never to reappear. The very first building constructed with cast-iron facing (on Washington and Murray Streets) built by the inventor of the genre, James Bogardus, was carefully dismantled, crated and boxed, but not sufficiently secured; the pieces were stolen soon after the building was taken down.

The Queens Plaza millstones deserve more respect as centuries-old artifacts than the city has so far been disposed to give them, and the GAHS and Newtown Historical plan to preserve them should definitely be given the greatest consideration.