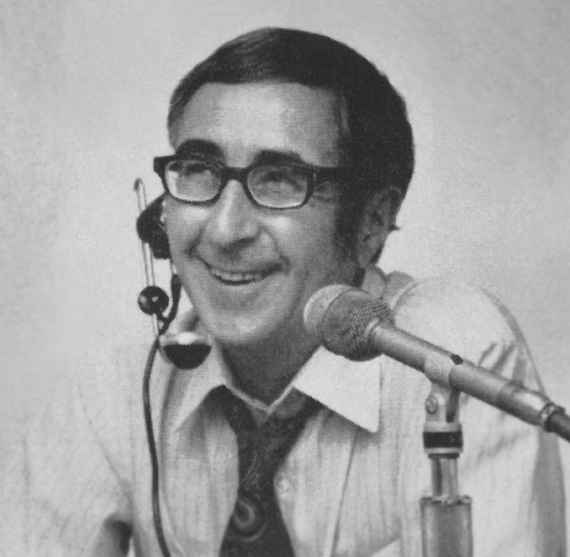 From my earliest memories, Milton Metz's voice was as familiar and reassuring as my own mother's. It was always there -- on WHAS radio and television -- from what seemed to be morning until midnight, although I realize now that was impossible.

He arrived in Louisville from Cleveland in 1946, right after World War II and just as the reach of WHAS radio was spreading; its 50,000-watt strength made it heard from Maine to Colorado.

In those days, WHAS personalities were far more than disc jockeys. In Milt's case, he was a specialist at some very important things: conversation and the weather. Early on in my life, my parents allowed me to watch the 10 o'clock news (Louisville was still in the Central Time Zone in the 1950s, so everything came an hour earlier than in the East). Milton's weather report was the highlight for me, and his youthful style stood out among a rather stodgy group of folks at WHAS-TV, which included Jay Crouse, Phyllis Knight and sportscaster Cawood Ledford.

The highlight of the show was Milton's map -- a magnetic affair to which he could attach cold and warm fronts, images of snowmen and umbrellas, and always featuring WHAS's logo, a little man with big eyes shaped like the channel's number -- 11 -- who was named "Fisbie." And Fisbie would tell us the warmest high of the day, often Needles, Ariz., or the coldest, frequently International Falls, Minn.

But Milton's vast talents ranged much farther than the weather map.

In the days when Rush Limbaugh was still in short pants, Metz was among America's great talk show hosts with an audience all over middle America. Beginning in 1959, his program was named for the station's telephone number, "Juniper 5-2385."

At the time, my family had been transplanted to Knoxville and were more than a little lonely for Louisville. We tuned in every night, and often the reception was as clear as a bell. We kept up with the news and weather, but we also made a new friend.

Milton was one of a number of late-night talk show hosts, a group that included Ed and Wendy King at KDKA in Pittsburgh, Larry Glick at WBZ in Boston, and many others. Of all of them, Milton Metz had the platinum show, reflective of the style and taste of WHAS' owners, the Bingham family. Like their flagship newspapers, The Courier-Journal and Louisville Times, they always offered news of the best standards and entertainment that was down-home and civilized, with country and western singers as well as church choirs.

I knew him well before I met him, sometime after I came to work as an obituary writer at The Courier-Journal in 1969. I don't remember exactly when it was, but it may have been at a meeting of the Society of Professional Journalists, of which Milton was a leader for many years. Those were in the years when women were finally admitted for membership, so many of my female colleagues attended when I had my first reporting job in the Today's Living (formerly Women's World) section.

When there was a local crisis, for instance the 1974 tornado, Milton kept this city together. As it had done 80 years ago this month during the Great Flood of 1937, the station remained on the air, providing public service to listeners in the days before the Internet and cell phones.

Milton Metz's gentle voice gathered news about the tornado's impact through the night, providing vital information for families about their loved ones' safety and the damage to their city.

Milton spent 40 years at WHAS during the Bingham proprietorship, a remarkable span of time. By the late 1980s, after they had gone, radio was undergoing a transformation, and the content became increasingly political and controversial.

None of that happened on his show -- which had been renamed "585-2385" when the phone company dropped its exchange names to accommodate push buttons and direct dialing. Until the 1990s, he was there every night to tackle important issues.

He was civilized, but certainly not milquetoast. Boy, do we need him now.