A new twist on an old mystery may finally settle the debate over the origin of Mima mounds, which bulge out of the ground like enormous, grass-covered bubble wrap.

Mima mounds (sounds like dime-a) were named in 1841, when a vast pimply prairie (the Mima Prairie) was discovered in western Washington during the United States Exploring Expedition. In the centuries since, the source of this strange landscape has defied explanation. A single field may be covered in a million mounds that are several thousand years old, yet no builder has ever been found.

Early explorers thought Mima mounds were Native American burial sites, but no skeletons or grave relics were inside. Armchair experts have suggested many other hypotheses, from earthquakes to floods to extraterrestrials. [Images: Amazing Mima Mounds]

Because the rich prairie soil at many Mima mound sites turns sodden when it rains, scientists often blamed burrowing pocket gophers, the same rodents that pockmark golf courses and lawns — perhaps, scientists surmised, the gophers built up to escape drowning. But the mounds are 8 feet (2.5 meters) tall and 30 feet (9 m) wide, and their sheer size led some researchers to pooh-pooh the idea that wee gophers could ever create such vast earthen citadels.

Now, a study analyzing the interplay between gopher and ground vindicates the humble rodent.

According to a computer model, "mature" Mima mounds appear after about 500 to 700 years of scurrying and burrowing by pocket gophers. In the model, single gophers add a bit of soil, pebbles or dead plants to each mound over many generations — the animals are fiercely territorial.

"That's what makes it take so long; it's generation after generation living in these mounds and building them," said study author Manny Gabet, a geologist at San Jose State University in San Jose, Calif.

"What's really cool about this is scaled by body size, these are the largest structures built by any mammal not including humans," Gabet told LiveScience's OurAmazingPlanet. "In terms of effort, it would be like a single person building the pyramids."

The new model, published Oct. 3 in the journal Geomorphology, combined virtual gophers with the unique soil conditions seen at Mima mound sites. Gabet incorporated behavioral studies of pocket gophers at Mima mounds in California. These studies revealed one of the key clues to Mima mounds. Unlike most gophers, the furballs push soil upward, toward the surface, instead of shoving soil downhill farther into their burrows. 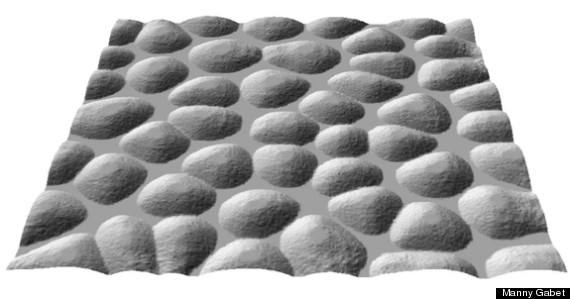 Another critical puzzle piece in Gabet's computer model was a shallow buried layer that was impenetrable to water, as is seen at Mima mounds in the West. Because this barrier prevents rainwater from quickly draining, water collects in the upper soil level where pocket gophers live.

While scientists had put these clues together before, no one had ever seen gophers actually creating Mima mounds.

"The problem with figuring out how Mima mounds form is that nobody has actually seen one form, which suggests that the processes that formed them are either no longer active or just very, very slow," Gabet said. "The advantage of using a computer model is you can speed up time."

The model suggests that gophers start pushing soil toward any existing high spots, and these budding mounds continue to beckon later generations of builders. "There's a positive feedback where the gophers are somehow sensing where the high spots are," Gabet said.

Eventually, the burrowing mammals run out of soil and the Mima mounds are fully "developed" — which takes 500 to 700 years. "There's an end stage where the mounds don't grow any higher," Gabet said. [World's Weirdest Geological Formations]

The size of each mature Mima mound roughly matches the territorial range of a single gopher, Gabet discovered.

Though the study isn't proof that gophers create Mima mounds, it does show that it's possible, said Ronald Sletten, a soil scientist at the University of Washington who has studied the state's Mima mounds.

"We don't have a smoking gun, but it's a very nice paper and it lends support to the hypothesis that it's feasible for gophers to move the amount of material to [make] the size and shape of the mounds that are there," Sletten said.

Mima mounds can be found at Washington's Mima Mounds Natural Area Preserve, a national landmark, and can also be found in many places in the West and the Plains. The unique landscape was more widespread before the prairie was planed off for farming, but there's a chance that the mounds could return.

On abandoned farmland in California's Central Valley, near the Carrizo Plain, Gabet has discovered budding Mima mounds, he said. There, he tested the computer model's predictions for mound spacing and height against the 30-year-old gopher piles and found a good fit.

In the Central Valley, temporary vernal pools appear between Mima mounds during winter rains, creating a rare type of grassy wetland and habitat for endangered species such as fairy shrimp.

Both Sletten and Gabet agree with the hypothesis that in the West, Mima mound gophers pile up soil to stay high and dry above wet ground. "If you live underground like these gophers do, then saturated soil is a fatal condition," Gabet said.

While this model may hold water for Mima mounds in the West, the mysterious hills are found on every continent except Antarctica, far from the range of pocket gophers. "This suggests other burrowing mammals have evolved this same type of adaptive behavior on other continents," Gabet said.