In the prairies of Washington, hundreds of large, vegetation-topped mounds — dubbed mima mounds — cover the landscape in a seemingly non-random pattern. Over the years, scientists have proposed numerous theories to explain these and other mimalike mounds across the globe, the most popular of which implicate animals, particularly gophers and termites, for the pimply blemishes.

But these fauna may deserve an apology, according to a new study, in which scientists argue that natural processes involving the spatial patterning of plants produce mimalike mounds. 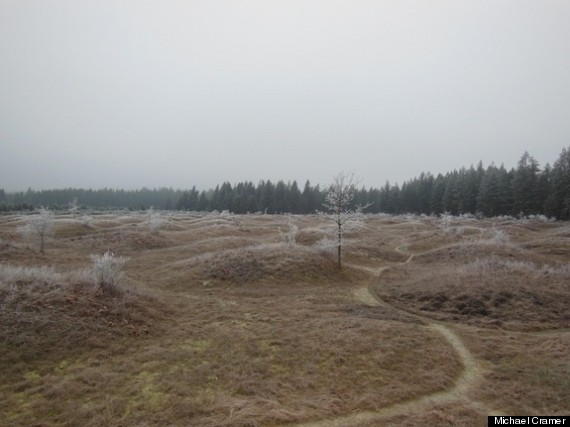 In the prairies of Washington, hundreds of large, vegetation-topped mounds — dubbed mima mounds — cover the landscape in a seemingly non-random pattern.

"My sense of the literature is that people look at the mounds and think they're faunally generated by default," study co-author Michael Cramer, a biologist at the University of Cape Town in South Africa, told Live Science. "Many [scientific] papers are written in such a way that vegetation patterning isn't mentioned."

"We're suggesting that people should have a more balanced view and entertain the possibility that vegetation could be behind mound formation," Cramer added. [See Photos of the Amazing Mima Mounds]

Non-anthropogenic earthen mounds are found on every continent except Antarctica. Some mounds, such as the nabkhas in semi-arid regions around the world, are known to form when wind deposits sandy sediment around individual shrubs and clumps of vegetation.

Research suggests that many other mounds don't grow like the nabkhas, but there's no real consensus on how such natural mounds formed. These formations, which Cramer calls "mimalike mounds," span varied environments and share a few similarities: They're large, up to 6.5 feet (2 meters) high and 55 feet (17 m) in diameter; they're often regularly dispersed across a given area; and they function as "islands of fertility," which support more plant life than the surrounding, lower-elevation land.

Some scientists have theorized that mimalike mounds form because of abiotic processes, such as seismic activity, the expanding and shrinking of clay or the cycle of freezing and thawing of soil and water.

Far more often, however, researchers point to an animal origin for the mounds — the mima mounds in the United States, for instance, are thought to be caused by pocket gophers, while termites are thought to have created the heuweltjies of South Africa and the murundus of Brazil.

But there are numerous issues with the faunal explanations for the mimalike mounds, Cramer and his colleague Nichole Barger point out in their study.

The large size of the mimalike mounds is problematic, Cramer said. "Most faunally generated mounds are much smaller," he said. "Typical termite mounds are almost an order of magnitude smaller, and gopher mounds are usually less than a meter in diameter." [Photos: Earthen Mounds Shaped Like Animals]

Some researchers have suggested that each mima mound developed from the efforts of many gophers, but this is unlikely given that pocket gophers are solitary and fiercely territorial, Cramer said. A related hypothesis suggests the mima mounds grow over many generations, because the animals take over old mounds and slowly build them up. However, there's no direct evidence that the animals ever reinhabit old mound sites, he said.

Another issue with the faunal theory lies in the big rocks commonly found in and on top of the mounds. Researchers estimate that pocket gophers can only move pebbles that are less than 2 inches (5 centimeters) in diameter, but numerous mima mounds contain many rocks larger than that. Similarly, the heuweltjies of South Africa contain rocks that weigh more than 22 pounds (10 kilograms), which is far heavier than termites can carry. (Some scientists have argued the activities of larger animals must have moved the rocks into the mounds.)

What's more, some mima mound areas are devoid of gophers and there isn't much evidence that the animals lived there in the past, Cramer said. Similarly, a 2010 study showed that the chemical signature of the soil in Brazil's murundus is not indicative of termite activity.

Cramer and Barger believe mimalike mounds are ultimately the product of something called vegetation spatial patterning.

Here, individual or groups of plants spread their roots and drain surrounding areas of water and nutrients, while the soil in which they grow remains fertile. Resources become depleted between the vegetation patches and accumulate on the patches, essentially setting up islands of fertile areas that are regularly spaced out across a large region.

The plants don't directly form the mounds, but they affect waterborne and windborne soil deposition and erosion, which can lead to mound formation, Cramer said.

Similar to the generation of nabkhas, wind or water may bring in a lot of soil to the vegetation patches, causing them to grow over time as the plants trap the sediment. Alternatively (or additionally), vegetation may stabilize the soil and reduce erosion around the patches and on the mounds. "If you have a patchwork of vegetation islands, they protect the soil from erosion, while the inter-patch soil gets eroded away," Cramer said. "This results in a deflation of the surface, which leaves behind the mounds."

"I am actually gearing up to now use the statistical techniques by the Germany group to analyze the mounds in South Africa," Cramer said. "There hasn't been a rigorous inclusion of how spatial patterning could generate these mounds. We want to try to find evidence for vegetation spatial patterning for the mounds, and differentiate if they are aeolian [windborne] or a consequence of erosion."

The researchers' analysis of mimalike mounds will be detailed in the September issue of the journal Palaeogeography, Palaeoclimatology, Palaeoecology.