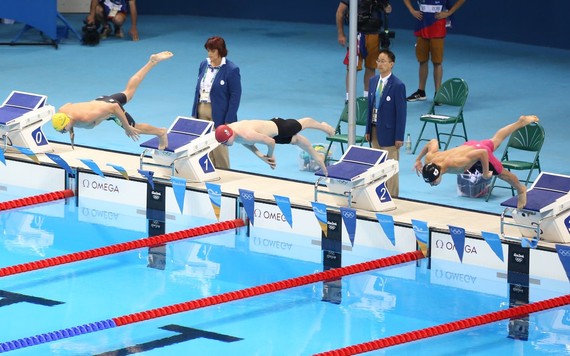 For Olympic athletes, the pressure of the Games can be immense. Often, years of training and preparation culminate in one shot to make that work pay off, all in a setting where expectations are high and the whole world is watching. We speak with sports psychologist David Fletcher, a researcher and consultant for professional and Olympic sports, about what's going on in athletes' heads as they push their bodies to the limits, and how mental health professionals can help them prepare.

ResearchGate: Do elite athletes have different psychological profiles than people in other professions?

David Fletcher: Well, the answer's yes and no. No, in as much as elite athletes are still human beings! They have fundamental hopes, motives, fears and relationships that are in many ways comparable to everyone else. However, the psychological characteristics needed to become an elite athlete, similar to other high-performing professions, are almost by definition different to the general population. Winning in sport isn't normal; so being psychologically different in certain ways is not just advantageous, it's necessity. Many of these differences are socially desirable, such as being extrovert and resilient, but some characteristics have a darker, less desirable feel about them, such as being obsessive and selfish. To understand psychology in elite sport, it's crucial to differentiate between outcomes relating to performance enhancement, mental health, and social desirability.

Fletcher: It can vary considerably. The Olympics is the ultimate test for any athlete: those who thrive in this environment are able to optimize their motivation, handle the pressure, stay strong in their self-belief, and maintain their focus. Those who freeze or capitulate in the Olympic environment, will direct their motivation inappropriately, struggle to deal with the pressure, begin to doubt their ability, or get distracted. Waiting to see how athletes will perform at the "moment of truth" is one of the reasons why top level sport is so compelling to watch and be involved in.

RG: What's it like afterwards? What happens when they win or lose?

Fletcher: Most athletes experience some sort of "post-Olympic low" following the Games. This is because for many, the goal of performing at their best will have been all-consuming, so the physical and emotional fatigue associated with competition will catch-up with them at some point. There is also the possible loss of identity due to a lack of subsequent goals and focus. Clearly the disappointment of underperforming at the Games can be difficult to come to terms with, but even for those that perform well and win a medal, the new life and attention that this often brings can also be difficult to adjust to.


"Winning in sport isn't normal; so being psychologically different in certain ways is not just advantageous, it's necessity."

RG: Are Olympic athletes prone to any particular types of mental illness?

Fletcher: There isn't a simple answer to this question. Research suggests that Olympic athletes are probably as mentally healthy as the general population. As such, Olympic sport does not appear to cause mental health problems or disorders. However, there may be aspects of Olympic athletes' personalities - obsessiveness, perfectionism, selfishness - that can be problematic for mental health, particularly when athletes retire from sport. Also, some aspects of the elite sport lifestyle and environment might function as risk factors for or exacerbate certain mental health problems.

RG: Are some athletic disciplines more mentally stressful than others?

Fletcher: It's problematic to describe some sports as "more stressful" than others, but the nature of the stress experience is likely to be a bit different. Firstly, and most importantly, athletes' personalities and psychological skills will play a huge role in how they handle pressure, regardless of the sport that they compete in. But the sport itself will likely impose different demands - think of a diving event which involves multiple dives lasting a couple of seconds each versus a two hour plus marathon race. The nature and demands of the two competitions are completely different and so too is the stress experience for athletes. An archer will likely need to develop advanced relaxation skills whereas a boxer will likely need psych-up strategies to perform to one's best - stress is such a personal thing.

RG: What role do mental health professionals have in athletes' preparations for and participation in the Olympic Games?

Fletcher: There's still a lot of misunderstanding around the role of psychologists and mental health professionals in sport. Put simply, the main focus of a sports psychologist is on athletes' thoughts, feelings and behaviors and how they can enhance sport performance. Whereas a sports psychiatrist focuses on mental disorders, illnesses or problems. In a perfect world, athletes would have access to both types of professional throughout their careers, in just the same way that they see a coach to improve their physical performance and a doctor or physiotherapist to address physical illness or injury. Unfortunately, this is rarely the case so it is not uncommon for athletes to not be as psychologically prepared as they could be or unable to address mental health issues if they arise.

"It is not uncommon for athletes to not be as psychologically prepared as they could be."

RG: To what extent does this vary from country to country or athlete to athlete?

Fletcher: Considerably, both across nations and within sports. Some very lucky athletes have access to several professionals in this area, whereas others will never receive psychological-related support in their career. The most progressive sport organizations are providing sport psychology support to athletes from an early age, and also providing related education for coaches and parents. Some sport organizations are also taking advantage of sports psychologists' knowledge to create high performance environments and cultures that people can thrive in.

RG: Overall, how has attention to athletes' mental health evolved over time?

Fletcher: For the most part, attention has steadily increased. The evidence-based underpinning of psychological support has grown significantly over the past few decades, and now many Olympic athletes will have engaged at some level with psychological support. Many nations and sport organizations are now purposively investing in sport psychology research and support, so everything has become much more professionalized over recent years. It's an exciting time to get into and be in the profession.

RG: As a researcher and practitioner, what would you say are the biggest challenges in the field?

Fletcher: There two big challenges for sport psychology in Olympic sport that spring to mind. The first relates to how we transfer and integrate sport psychology knowledge into practice. Like many others fields, a gap has existed between research and the real world; the best nations seem to be able to effectively bridge this gap in such a way that it makes a real difference in athletes' lives. The second relates to how we reconcile some of the potentially psychologically dysfunctional aspects of elite sport with the desire to get ahead of the competition. In my opinion, a tension can sometimes exist between optimizing mental health and enhancing athletic performance - something that is not easily resolved in the heat of top level sport.