Once again, we're reminded that we need to address the power imbalances that limit opportunities for girls and women to live their lives to the fullest. Tackling this issue requires a change in a society's understanding of "what a woman can or can not do." Policies help. Signing treaties help. Yet, advocating a change in mentality requires reframing the conversation at the policy level. There is a big gap between the laws on paper and their implementation. Additionally and more importantly, men, a large segment of the society, were mostly left out of the conversation and sometimes demonized in this context. The solution lies in men taking ownership. We need men to join the conversation. We need men to take responsibility.

In Turkey, one of the biggest obstacles in front of gender equality is the mindset. Women are not seen as independent individuals, but as a part of the family and society. This way of thinking has shaped government policies as well. The "State Ministry Responsible for Women's Affairs" was turned into "Ministry of Family and Social Policies" in 2012. Women organizations viewed this move as emphasizing family integrity over a woman's individual rights and highly criticized it. Right after Özgecan's death, Minister of Family and Social Policies, Ayşenur İslam, admitted that the number of women killed increased by some 35 percent from 2011 to 2013 in Turkey. However, Minister İslam associated this hike to the global pandemic of societal violence. She also recommended a change in mentality. However, she did not refer to altering the way the Turkish society perceived women. She highlighted the need to transform the values of the society in large. It is clear that the Ministry that deals with violence against women does not see the correlation between the rise in violence and the status of women in Turkey. I believe that this mentality has to change.

Even though Turkish laws and regulations are in place, Turkey's gender gap and statistics on violence against women are some of the highest in the world. This requires a deeper look into the gaps in outcomes, not just in means or inputs. During the 1995 World Conference on Women, 189 governments signed the 1979 Convention that outlaws discrimination, and committed to equal access for women. However, most of the countries, including Turkey, still not translated these commitments into reality. The attainment of these rights continues to be a challenge despite the numerous advancements, particularly in the Constitution, the Criminal Code, the Civil Code and the Labor Act. A strong legislative response is an important first step, yet, however well intentioned, it is not enough to change the mentalities in an abidingly patriarchal nation such as Turkey. Social norms and traditions actively constrain opportunities for girls and women, and inhibit the promotion of gender equality between men and women. The Twitter campaign, #sendeanlat -- or #tellyourstory -- where over one million women shared their personal sexual harassment stories, was a testament that the culture that presides in Turkey has not changed with signed treaties or domestic laws preventing violence against women. We need norms to evolve to allow greater agency for women and girls. The gender gap and related violence will not disappear in Turkey and elsewhere, otherwise.

If men join the conversation, we have a better chance towards eliminating gender gap. This approach was fanned by the speech of UN Women's Goodwill Ambassador, Actress Emma Watson in September of 2014. Her speech was to introduce UN Women's solidarity movement, HeForShe to encourage men and boys to be advocates of gender equality and take action against inequalities faced by women and girls. As Emma Watson has noted in her speech, "how can we effect change in the world when only half of it is invited or feel welcomed to participate in the conversation?" I believe her speech struck a chord with many as several new campaigns involving men were initiated since then. 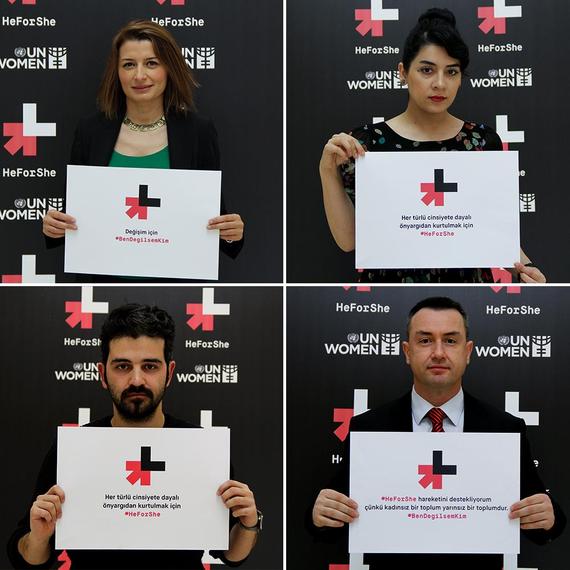 Lean In, the organization established as the next chapter to Sheryl Sandberg's famous book, launched a public awareness campaign, #LeanInTogether, on March 5th in partnership with ESPN and the NBA/WNBA focusing on men and their important role in reaching gender equality. HeforShe campaign actively launched in Turkey as well with #bendegilsemkim -- or #ifnotmewho -- hashtag trending on twitter this week with supports from many corporations. The Twitter campaign, #sendeanlat -- or #tellyourstory -- also ignited a reaction from males. Men from Turkey and from neighboring Azerbaijan showed solidarity by posting their pictures with miniskirts on Twitter with the hashtag #ozgecanicinminietekgiy -- meaning "wear a miniskirt for Ozgecan." Some even took their skirts to the streets and joined several protests in İstanbul. The goal was to show that wearing miniskirts does not mean immortality. The campaign even got support from Emma Watson. This is a great step towards a change in mentality in Turkey.

However, there is room for more effective policy implementation and more men. All governmental agencies should accept the fact that violence against women continues to grow in Turkey because women are not seen as individuals, and should work in a concerted way work to change that mentality. And, of course, even some men are on the streets protesting violence against women, changing a mindset that has been residing over a culture for many years, requires involving all men. Dear Men, please join our movement!