"A man is a success if he gets up in the morning and gets to bed at night, and in between he does what he wants to do." ~ Bob Dylan

At various times during my life I've been relatively wealthy and relatively impoverished and neither one has particularly appealed to me. But the psychology of money - how our minds relate to all of those bank statements and credit card bills, dollar signs and numbers - has always fascinated me.

Ask yourself, "Do I have a scarcity mentality and live in constant fear of not having my basic daily survival needs met (like the 3,500,000,000 people on planet earth who live on less than $1.50 per day)?"

Or... "Do I believe that the universe is wonderfully abundant and forces are conspiring to insure that I thrive?"

Is there a gray area in between these two extremes? Or does one's personal paradigm shift over time as he or she gains and loses money?

Similarly, UPenn Professor Paul Fussell in his book "Class: A Guide Through the American Status System" claims that colors correlate with social class; just think of the color choices you get at a BMW or Porsche dealership as opposed to a Kia or Hyundai dealership.

And if Harvard Law Professor Lani Guinier's research in "The Tyranny of the Meritocracy: Democratizing Higher Education in America" is correct then it seems as if SAT scores are better indicators of family income than of scholarly aptitude:

I recently met two young female budding entrepreneurs who each separately exclaimed, "I want to make a lot of money!" After the vomit subsided from my esophagus, I looked inside myself to enquire as to why I find such languaging to be crass, vulgar, gauche, and lacking grace and dignity. (Already I can envision comments below asking "What's wrong with making money?" to which I would reply, "Nothing, as long as your personal identity isn't merely an amalgamation of material possessions and numbers.")

"I desire more freedom, ease, opportunities, and options," would be the way I would express a similar sentiment. 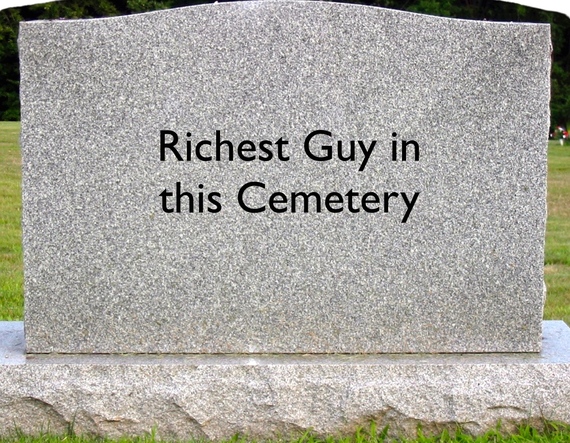 One of the two aforementioned women happens to be $30,000 in credit card debt at an average annual rate of 12%. I asked her how much she earned from her day-job and she told me that took home about $900 per week after taxes. I told her, "Ok, pick any month of the year - January, February, March, April, May, it doesn't matter - and know that every day during that month you will drive to work and sit at your desk and 100% of your earnings will go to the banks that loaned you that $30,000 - one month of your life every year until you pay it off - because $3,600 of yearly interest payments equals exactly 4 weeks that you work for zero income."

This is the way I think about money. I think of it in terms of freedom, free time, time to pursue things that inspire me.

The second of the two women is friends with several billionaires who apparently use their net worths as measures of success in comparison to their fellow one-percenters - like little boys having contests to see who can piss farther.

The mind is analogous to an hedonic treadmill, so when whatever object of desire is acquired it will soon be replaced by a new one. If a billionaire looks out across one of her majestic properties past the electronic fence disguised as a weathered brick wall, past the surveillance cameras hidden in trees, and past the armed sentry's house, and notices five Olympic size pools on her neighbor's estate, her mind will probably say something like, "I can't believe Joan has five Olympic size pools and I only have four! Something must be done about this right away!" But as soon as this billionaire acquires a fifth pool then her mind will spy another useless indicator of wealth that she feels she needs to acquire. For money and status are a never-ending game. Enough is never enough, to our minds. BTW, I think someone might have once mentioned that it's not great to covet thy neighbor.

Do you consider your bank account to be an accurate indicator of your success in comparison to your fellow humans on planet earth? Well, then BRAVO! Well done! Because there are at least 3,500,000,000 people who survive (barely) on less that what you paid for your cup of coffee or tea this morning.

Or... do you subconsciously believe that financial worth displays how much or little your god loves you? This would be an inversion of Weber's theory regarding the Protestant Work Ethic: previously people believed that if they worked hard God would reward them; then this morphed into the trend of "conspicuous consumption" with status symbols such as designer labels overtly screaming, "Look at me, my owner must be rich to be able to afford me so God must love her!!"

I think that men are even worse than women at constantly measuring their social statuses. Two men meet for the first time and three questions are usually asked: What's your name? Where are you from? What do you do (to earn a living)?

Watch your mind construct two distinct images when you hear 1. "My name is William, I live in Cupertino, and I'm a patent attorney mostly involved with trademark litigation" vs. 2. "Ronnie. Idaho. I drive a truck." Names, cities, and job descriptions all correlate strongly with social class.

Scientific studies on happiness prove that once our basic survival needs are met happiness increases only marginally with higher net worth so it is interesting that our minds seem to expend so much energy continually tracking our financial well-being.

I try to live by the adage "Any problem that can be solved by money isn't a real problem." And yet there are financial issues - like the $304 parking ticket I recently received (because such draconian punishment actually functions as a regressive tax) - that are so emotionally charged that I will lose sleep for days over them.

So how does your mind think and talk about money?

More:
Moneysat scoreshealthy livingIncome Inequalitynet worth
Newsletter Sign Up
The essential guide to taking care of your mind and body
Subscribe to HuffPost’s wellness email
Successfully Subscribed!
Wellness delivered to your inbox