Since the 1960s, the United States Supreme Court has found it unconstitutional for public schools to teach religious practices such as prayer. But today, mindfulness meditation--a Buddhist religious practice similar to prayer--is promoted by schools nationwide. Why aren't the courts intervening? Because promoters assert, as the Associated Press did recently, that "Western culture has secularized" this "centuries-old" religious practice.

But what does it mean to "secularize" mindfulness? It boils down to a simple change of vocabulary. Promoters drop the terms "Buddhism" and "meditation" and add the terms "neuroscience" and "scientific research." Meanwhile, the same practice is taught in both public schools and Buddhist basics classes.

Indeed, the Associated Press notes that the Portland, Oregon high-school mindfulness program it features, Peace in Schools, is the "brainchild" of European-American Caverly Morgan, who "trained at a Zen Buddhist monastery for eight years," and who, according to Morgan's personal website, remains committed to "Zen Awareness Practice" and "maintains her own spiritual practice while offering the gift of practice to others." Peace in Schools boasts being the "first for-credit mindfulness course in a U.S. public high school."

Trudy Goodman, founder of Insight LA, California, confesses in an interview with Vincent and Emily Horn of BuddhistGeeks.com that what she advertises as "secular" mindfulness for public schools is really, in her words, "stealth Buddhism." Although the "secular" classes use a "different vocabulary," getting children to engage in the same practice of mindfulness that is taught in Buddhist classes transforms students "whether they want it or not," and many go on to enroll in explicitly Buddhist classes. The podcast interview records Goodman and the Horns laughing while discussing this intentional deception.

"We worked the most on language," admits Marilyn Neagley, director of the Talk About Wellness initiative in Vermont public schools: "When we say 'mindfulness,' we feel it's safer than saying 'meditation.'"

Actress Goldie Hawn actually refers to her internationally disseminated MindUP curriculum as a "script." She explains her tactic to a group of Buddhist insiders at the 2013 Heart-Mind conference at The Dalai Lama Center for Peace-Education: "We have to be able to bring contemplative practice into the classroom under a different name because obviously people that say 'oh meditation' they think oh this is 'Buddhist.'" So she instead uses the terms "Core Practice" and "brain breaks" as euphemisms for Buddhist meditation.

Hawn started The Hawn Foundation in 2005 and recruited educators, neuroscientists, and psychologists to work with Buddhist meditators in writing the MindUP Curriculum, published in partnership with Scholastic Books in 2011. When speaking to Buddhist coreligionists, Hawn says MindUP "all started" with "His Holiness" (who gave Hawn her own personal mantra) and with the Dalai Lama Center. But, in presenting her program to the public, Hawn drops all references to Buddhism or meditation and claims that she is simply teaching children how the brain works.

As an actress and movie producer, Hawn knows the power of language to win an audience. Hawn describes the genesis of MindUP to Buddhist insiders: "I'm a producer, I'm gonna put this show on the road . . . and I got the script written, and I call it a script because it is, it's one step of how the story gets told of how you're able to facilitate the best part of you." The MindUP "script" tells the story that Buddhist mindfulness meditation is really "secular" neuroscience. Yet, contradicting this claim, the Hawn Foundation's Scientific Research Advisory Board webpage--which lists only one member: Kimberly Schonert-Reichl--links to Schonert-Reichl explaining how classroom mindfulness advances "Buddhist Contemplative Care."

The MindUP curriculum consists in large part of simplified (and not always accurate) lessons in brain anatomy ("reflective, thinking prefontal cortex" = good, "reflexive, reactive amygdala" = bad) and exhortations to be kind to others (pause for a moment before hitting another kid back), oneself (if you actually try your vegetables you might like them) and the earth (recycle instead of littering). This may not be a great replacement for spending school time on math and reading skills, but it has nothing to do with meditation or mindfulness.

Yet here's the kicker. The MindUP curriculum insists that its unique benefits derive from its two distinctive features:

1) "The MindUP Core Practice is the signature daily routine of the MindUP program." The "Core Practice" of "deep belly breathing and attentive listening," i.e. mindfulness meditation, is to be led by classroom teachers three-times a day during every school day. Cued by a resonant sound to begin and end practice, students are instructed to focus attention on their breath and cultivate "non-judgmental awareness" of passing thoughts and emotions. This Core Practice, the curriculum promises, habituates children to respond to experiences in a mindful way that develops moral and ethical virtues of "empathy, compassion, patience, and generosity." If the Core Practice of mindfulness is reducible to paying attention while breathing deeply, it is unclear how it makes one virtuous--except as a tenet of the eightfold path of Buddhist awakening.

But the curriculum further insists that: 2) "To get the full benefit of MindUp lessons, children will need to know a specific vocabulary." What vocabulary word is repeated multiple times every lesson? Mindfulness. Repetition of this term communicates that mindfulness--circularly defined as the opposite of "unmindfulness"--is the key to any positive attitude or behavior. Lessons encourage students to think of role models who act in mindful ways--the custodian who picks up trash, a doctor who keeps calm in emergencies, or an imaginary dinosaur who eats its broccoli rather than spitting it out--though none of these role models may ever have used MindUP's Core Practice. But defining mindfulness as synonymous with virtue makes it seem urgent that children cultivate mindfulness rather than unmindfulness. How do they do this? By engaging in the Core Practice every chance they get.

Why is the Core Practice central to MindUP? This goes back to Goldie Hawn's agenda of getting Buddhist religious contemplative practice into the classroom by another name. As I explain in more detail in my previous post, meditating on one's breath and present-moment bodily sensations and cultivating non-judgmental awareness of passing thoughts and emotions trains the mind to perceive experiences and the notion of a "self" as transitory. Right mindfulness--the seventh aspect of the eightfold path of Buddhism--alleviates the human predicament of suffering by detaching the mind from pursuing desires, avoiding dislikes, or worrying about past or future. Compassion toward others stems from realizing that everyone is really part of the same universal process, or Buddha nature. The ultimate goal is freedom from karma and reincarnation, and attainment of enlightenment or nirvana.

Of course, the MindUP curriculum never uses any of these religious-sounding terms. It just keeps returning to the mantra of "neuroplasticity"--that mindfulness changes the brain. Research shows that lots of other things--such as math, aerobic exercise, music, and a healthy lunch--all change the brain too. MindUP doesn't mention these more conventional components of the school day because this might make the Core Practice seem less essential.

Repetition of the term mindfulness does one more thing: it points children and parents to where they can find resources to go "deeper" in their meditation practice. Googling the term "mindfulness" yields an abundance of explicitly Buddhist books, classes, and retreat centers. Jenny Wilks, a teacher of both "secular" and explicitly Buddhist mindfulness classes, reports seeing "an increase in the numbers of people coming on retreats and many of them have started with a secular eight-week course."

Public-school mindfulness programs often pair the term mindfulness with "heartfulness." Mindful Schools is one such program, founded in 2010 in Northern California, and now providing on-site or on-line training to teachers and children in 48 states and 43 countries. The Mindful Schools website embeds a promotional video, Healthy Habits of Mind, which depicts what heartfulness looks like in the classroom--in short, it looks a lot like prayer: 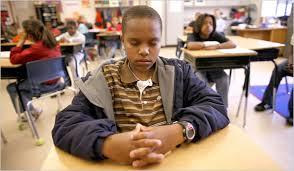 "'I want you to first picture Aiden in your mind. Now I want you to picture Jailen. Really picture him. And now I want you to say. May you be happy. May you be healthy, and may you be peaceful.' Whenever we have somebody that's absent in here, and I know it's because they're sick, we actually stop in the morning, and we close our eyes, and we send good thoughts to that person. And there is something about that action of stopping and noticing that somebody who is a part of our community is not here and it's because they're not feeling well. It could be somebody who has already passed too. Think of that person, close your eyes, and have that person right in front of you. [Videotaped teacher and students fold their hands in a prayer position.] 'May you be happy and peaceful. May you be safe and protected. May you be healthy and strong and free. And may you accept yourself just as you are.'"

Instead of asking children to pray for God to bless sick classmates, the teacher "secularizes" prayer by substituting the language of sending good thoughts, while leading children to perform symbolic gestures such as folding their hands in a traditional prayer gesture and closing their eyes, while reciting companion phrases that connote prayer.

Although limited to "secular" language while in the classroom, mindfulness instructors take more liberties in off-campus teacher trainings. Organizations such as Mindful Schools require that classroom teachers using their curriculum enroll in a training course and cultivate their own personal, daily mindfulness practice. This is because mindfulness is a "lifestyle," not merely a curriculum comparable to that for math or social studies. A year-long certification program is bookended by two week-long summer retreats designed to "deepen your personal practice." As one testimonial posted on the Mindful Schools website reports, teacher Sivie Suckerman from Seattle, Washington "gained a deeper connection to what's not in the curriculum but inherent in the practice."

Why is mindfulness sweeping American public schools? There is a perceived crisis in U.S. public education. Religious disestablishment coincided with desegregation, new immigration, and accelerating urbanization--social developments that many observers blame for a seeming epidemic of poor academic performance, bullying, violence, stress, obesity, sex, and drugs. In the wake of Supreme Court rulings, schools cannot use Protestant religious practices such as prayer and Bible reading to inculcate moral and ethical character. Teachers and administrators welcome offers by Buddhist meditators to teach "secularized" versions of practices that instill the same moral and ethical virtues as religion. Ironically, it is primarily European-Americans who seek to extract meditation "techniques" from the "cultural baggage" of Asian religious traditions and impose them on "low-income, at-risk" African-American and Hispanic student populations. Why? Educational reformers fear that their own children may be threatened by the perceived inability of racialized "others" to "self-regulate."

It took 300 years for the Supreme Court to remove prayer from public schools. When will courts notice what mindfulness promoter Emily Horn calls "the New American religion"?