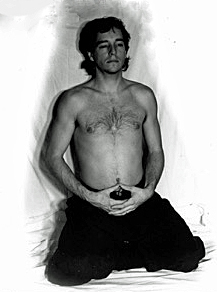 The author at age 26 sitting in Zazen Seiza style.

This past August, at the age of 56, on the last day of my summer vacation, on the day after I ran yet another 5k, while I was attending my Saturday morning yoga class, I had a heart attack that could have killed me. It was a shock but not a surprise. Heart disease killed my older sister at 54, would have killed my dad at 56 had he not been life-flighted to UMass Medical Center where they shot him up on the helipad with a then experimental decoagulant, and heart disease killed my granddad on my first birthday. I had had a full medical work just the summer before and all systems were good--my blood pressure, oxygenation, heart rate, and cholesterol, were all within the normal limits for fellow my age who was then biking an average twenty miles every other day and going to yoga class regularly. Plus, knowing about my family history, I have eaten a healthy balanced diet with little processed food for forty years, and I have been a meditator and yogi for over thirty-five years. I am not bragging. I was just taking care of myself because I figured that one day my DNA was coming to get me.

At yoga class I self-diagnosed a heart attack. A yogini drove me the five minutes to what a year ago had been our small rural hospital and was now our Urgent Care Center, where I learned that I had a one hundred percent blockage in my anterior interventricular branch of my left coronary artery--nick named the "The Widow Maker". I was quite a bit of pain. It felt like Ganesh was on my standing chest in Tree Pose, with one foot, and all of his weight, balanced right on my heart.

I heard my doctor order morphine for me and I said, "No, please don't give me any. It'll make me terribly sick. I'm allergic to morphine and all opioids. I'll handle the pain myself. I'll have to. I'll meditate." He insisted and I declined. I'd had morphine and its nasty cousins before. I didn't need to be sick on top of my heart attack.

Mindfulness meditation has been my fall back for decades, and in this case I had an unfair advantage--I don't fear death. It's a byproduct of my Near Death Experience back in 1980, which meant that my mind was not overflowing with anxiety or fear and that meant that I could use my brain, through meditation, to control my pain.

The doc shot me up with a decoagulant, and like my dad before me, it gave me a five percent opening in my Widow Maker--giving me a fighting chance and a trickle through space for blood flow that might prevent heart damage, and might keep me alive, while I made the long drive by speeding ambulance to the nearest catheterization laboratory that was an hour and a half away through summertime coastal Maine traffic.

As they wheeled me out of the urgent care, my son came over to me, took my hand, leaned in close, looked me in the eyes and said, "I love you, dad." A day or two later I learned that my Urgent Care doc had taken my son aside before my ambulance ride and told him, "If you have anything that you ever wanted to say to your dad, you'd better say it to him now."

As they wheeled me out, I started my mindfulness practice hoping to control my heart pain. I didn't know if it was going to work. Ganesh was still in Tree Pose on heart. I began practicing mindfulness in high school, and, over the decades, it has become a powerful tool in my life in small ways, like stopping a song from torturously repeating itself inside my head, and now in a large way, by helping me handle my extremely painful heart. Inside my head, with my eyes closed, I practiced my single prayer chant resting it gently on my breath, and breathed gently in and out as I have ten thousand times ten thousand times before, until my chant dropped away and I was left with only breath, and then I slipped into the deeper darkness of internal nothingness, of peace, and of quiet inside me.

This is not say that I did not hear what was going on around me, nor feel my heart pain; I heard and I felt. By not looking at the pain I relaxed my body and quieted my mind and let the pain within me, and sounds around, me pass through me, and pass by me, even while they were fully with me. I remained in this deep place for most of the next twelve hours. I didn't know when I started if I could maintain meditation for that long, but I had to, so I did.

On the ambulance ride down I heard my two Paramedics talking with increasing concern about whether or not I was going to make it to Portland. I later learned that on my ride that I had developed ventricular tachycardia and ventricular fibrillation where the heart muscles contract at a rapid rate, but no effective pumping of blood from the heart takes place. I had an IV in my arm and they kept increasing the flow of--what I believe was--nitro-glycerin. I was inside my mediation, but I could hear them, and when I head one paramedic seriously express her increasing concerns, I opened my eyes, and she looked at me, and in her eyes, I saw fear and determination. She reached for my IV and turned it up higher. I went back to my mindfulness practice and stayed there until we arrived at the cath lab. They rushed me inside.

The heart surgeon told me what he was going to do, "I'll insert a catheter up through the artery in your right arm and install a stent. Adding to his team, "He's not on pain medication. Let's give him some."

"No," I said, "I'm allergic. It'll make me sick. The last time I had surgery it made me very sick. I don't want any. I'm meditating. I've been meditating this whole time. I'll handle it."

He said, "Okay, if you think so, so far so good, but are you allergic to Novocain."

He said, "Good, then I'll numb your arm first. It'll burn a little." He did and it did.

I felt the catheter snake inside me as it reached up passed my shoulder where the Novocain did not numb. I felt catheter move inside of my artery into my heart. I felt him install my new stent, and felt him look around in there. It did not hurt but it felt strange. He said to his team, "He has a few tiny moguls in couple of places that I can see but they look harmless enough."

"Moguls," I said? "Are you a skier? I like skiing the moguls. Are my tiny moguls harmless?"

He said, "I thought your were meditating and couldn't hear me. Yes, they are harmless enough."

"I am meditating," I said. "It's a misconception to think that hearing is silenced in meditation." I dropped back in again.

They wheeled me to ICU. My internal temperature regulation inside my body went a bit awry, and the busyness of the medical staff, pocking and prodding me made it hard for me to keep mental focus. My son was there. My wife was there. They comforted me, and then it quieted down, and I quieted down, and I dropped back into my mediation.

Around 9 PM that night, hours after my family had left, and after twelve hours of heart pain, I found that I could no longer meditate. My mind was weakened, and I was tired and I could not sleep. I asked for pain meds--something other than opioids. They gave me something. I don't recall what it was, but it took the pain away. Ganesh left the room and I slept a painless sleep.

Now nine weeks out from the event, when I tell people what happened--and that I used mediation to control my pain I hear them say that they are surprised at the power of mindfulness. I tell them, it works and that I learned it from my mother, who began the practice herself in the late 1960's when she suffered from sciatica and used mindfulness to control her pain. They encouraged me write this story.

I always have my mindfulness practice with me. I can practice it anywhere, and almost at any time. It keeps me from being bored when I am waiting, say, in a doctor's office. You can practice it, too. It's easy. Find a teacher and then practice. It just takes willingness, and discipline, and only a few minutes a day. Today's a good day to start. Who knows what tomorrow will bring.