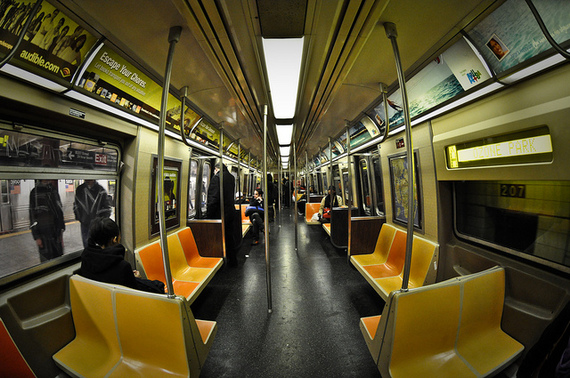 When I heard that just 12 tiny little minutes of mediation practice a day helped practitioners "to keep their attention and working memory -- that is, the added ability to pay attention over time -- stable," I realized it was time to consider creating a daily practice of my own. The study, conducted by the University of Miami's Contemplative Neuroscience, Mindfulness Research and Practice Initiative, engaged actual Marines as their test subjects. If one had a job that needed extreme focus, this might top the list, these guys, air traffic controllers and surgeons. But, even though my job didn't have lives depending on it, I knew I needed help.

Questioning my own memory had become routine. My mind, a polar vortex of activity, rarely seemed to find a quiet space in which the mental banter ceased. This overactivity became truly vexing in the middle of the night, usually around 3:07 a.m. Sometimes it was because my bladder made itself known to me, and other times, well, who knows. Once my brain started, it was impossible to reverse. My eyes opened and my mental engine began whirring. It was almost like I could hear it, like that noise from your computer when the fan turns on. If there exists a future where, let's say, Google creates a key that I could take out of my mental ignition, I would fund it at the top level or offer my brain up for research.

The options for turning my mind off are limited. They are as follows: count backwards, turn on my bedside lamp and read, or think about what I'm going to wear the next day. This last one is not as helpful as it used to be, since the desk I sit at during the day is in my living room. Counting backwards tends to be of little help since I never seem to get past 89 before my mind again wanders and I lose count. This leaves me with reading, my only fail-safe method.

When I read about the Marines, in the Sunday Times magazine, I realized if they could do it, so could I -- 12 minutes sounds easy right? It's about the amount of time I spend walking to get coffee in the morning or, sometimes, waiting to get that coffee.

I wondered if meditation would help to quiet my mind in both my waking hours and my sleeping hours. If I did meditate, when was the best time? Where should I do it? In my bedroom, in my bed, sitting on the floor, or on my couch? Psychology Today notes that in the morning, before breakfast, is a very beneficial time. But they also suggest that your lunch hour or after work are also good. Since I like to work at the libraries, could I do it there, with people around me? The questions regarding setup overwhelmed me and, despite the benefits proven by those tough guys in buzz cuts, I pushed it off.

Instead of seated mediation, I decided to start with the concept of mindfulness and see if I could incorporate it into my everyday. I recalled a meditation hike one summer day in Marin. Our teacher suggested we focus on the ground underneath our feet as we moved. No talking, she told us.

Since walking was my constant in New York, I began there. Out my front door and down my two flights of stairs, I stepped out onto my bustling street and walked. I kept my phone and my iPod in my bag. Hands in my pockets, scarf around my ears, I filled my mind up with what my senses pulled in. Rough uneven pavement was everywhere. Metal grates clanged underfoot. I felt the specks of gravel in the crosswalk where they had just resurfaced the streets. My mind cleared.

While I waited in line at the coffee shop, I stood with my feet side by side. This meant no leaning, slumping or bent legs. Equal weight on each foot, my back ramrod straight, shoulders pulled away from my ears and no shifting. When the line moved forward so did I. I didn't touch my phone and I kept my gaze open. I tried not to notice the girl's jacket in front of me. It was cute. Where did she get that? Ack. Empty my mind! Okay, okay, I can do this. I was still.

Next I took this concept to the gym where I practiced the art of stretching. While seated, with my legs long out in front of me, I reached and grabbed on to my toes. I counted and I breathed. Counting helped me hold the pose for thirty seconds, which physical therapists recommend to get the most benefits. Breathing is where I worked to wipe away the internal noise. I used it as my mantra: breathe in, 1, breathe out, 2, breath in, 3, breathe out, 4. I settled in, and held the pose.

Feeling a bit like a pro I decided to try for somewhere really hard: the subway. Since I ride the subway often, I decided to incorporate two ideas into the one idea of mindfulness: light exercise and focus. According to an article on the BBC, "there is mounting evidence that exercise will not undo the damage done by prolonged sitting." As a writer I live in constant fear of those endless hours of tush time.

I determined, through absolutely no scientific research, that walking to the subway (5 blocks) and then standing on the subway (10-15 minutes), was an activity worthy of my attention. In their sample of standers, the BBC noted that their heart rate increased, on average, around 10 beats per minute, for a difference of about 0.7 of a calorie per minute (compared to sitters). This equals about 50 calories an hour. Even if I only ride the subway for fifteen minutes a day, this would amount to 4,544 calories burned in a year, just from making one tiny change to my routine. So I stand.

I was a bit stumped on how to bring mindfulness into the subway ride. I decided not to hold on (it is cold season you know), and instead I splayed my legs a tad wider and rocked with the movement of the car. It was bumpy, noisy, and distracting. Could I meld into the distractions? I treated it like a Bikram yoga class and looked at my reflection in the door opposite me. Were my shoulders up around my ears? Yep. I rolled them back and down. I looked deeper into the glass until I peered through my face, almost like looking at my third eye. I no longer saw my surroundings. I continued to stand and allowed my hips to rotate with the car. With the chime of the door I came out of my zone, picked another body part to focus on and continued.

In these pockets of mellow I found an opening. I noticed how much calmer I was when I didn't always have my phone in my hand, and that my mental to-do lists could fade away much quicker. I thought of all the other places I could attend to with a deeper attention: chopping vegetables, washing dishes, and even eating. It all sounds so easy now. Maybe it was even time to start my meditation practice? Of course, but first let me get another cup of coffee.

Freelance writer based in NYC