A new social network that uses a points-based system to encourage people to interact with content is closing in on 1 million registered users since it launched earlier this month, according to the company's CEO.

"We've been around for a week. We are already serving significant impressions," said Bill Ottman, the founder and CEO of Minds, in an interview last week. "We're not saying we're an ad network on the scale of Facebook or Google or television: It's the potential of what it might become."

Minds has existed as a blogging platform since 2012, reaching 30,000 users in its private alpha mode. But on June 19, the developers behind it launched a new social network and associated mobile applications for Apple and Android devices. And according to Ottman, it's already wildly popular, with almost 1 million accounts.

The Minds team hopes that allowing people to use a virtual currency system and putting privacy at the forefront will differentiate their product in an already crowded marketplace. When people use the Minds mobile app to upload content, vote, refer people, post or comment, they earn points -- which can then be used to boost their own or other people's updates on the network.

It's a different take on a business model beyond the advertising approach used by Facebook. "We're trying to advertise for our users," said Ottman. "We want want our users to monetize their channels, build reach and ultimately earn revenue as well. People want to be independent online."

Minds users have sent over 1.5 million "boosts" since the launch earlier this month, Ottman said. The boost system is only on mobile, however, while a number of other features -- including a Bitcoin wallet, bulk file upload and blogging options -- are only available on desktop. 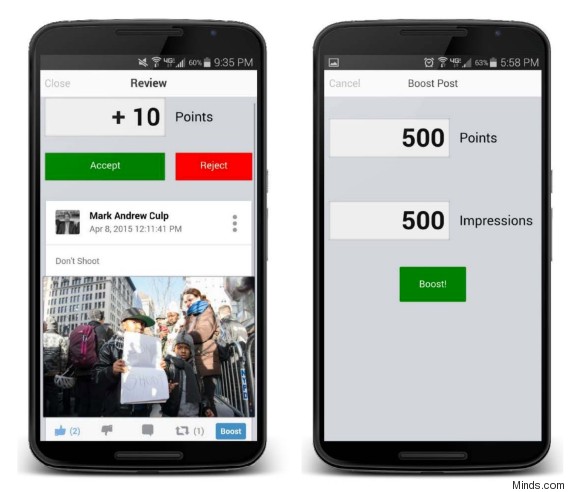 The points system on Minds.

The other big draw is privacy: The Minds app includes a messaging service with end-to-end encryption, a feature that Ottman said will resonate with users and drive growth.

"We made it really easy," Ottman said. "Things are just encrypted. That's the foundation."

But, he added, the unique points system is what will help the network catch on. "For mass appeal, reach is what will spark people's interest."

Ottman said that source code must be public in order to prove that a secure mobile app doesn't have backdoors, or ways for hackers to get in and find private information. To that end, the code for the Minds mobile app is open source and on Github, for all to see.

"Open source is really appealing to people," he said. "We're walking the walk in terms of how we're building the app."

As with Wordpress, a notable open source success story, the Minds software could lead to something bigger if the mobile app catches on and developers adopt and improve the secure social networking app. For example, it's possible an ambitious developer could use the free code to make his or her own secure app as well.

If this all sounds a little familiar, it should. By 2009, Ning was operating a network of 1 million social networks that reached 20 million visitors every month, with a host of developer tools. Ning phased out its free service in 2010, and was acquired by Mode Media in December 2011. Today, Ning is still online, with over 2 million social networks formed to date.

Minds is also similar to the idea behind Diaspora, a decentralized, open source social network that launched in 2010 to great acclaim as a privacy-focused alternative to Facebook, but never caught fire. Diaspora also made headlines last summer when ISIS started using it, but just 21,534 of its 1.13 million users were active in the last month, according to an analytics website that tracks Diaspora software installations and use worldwide.