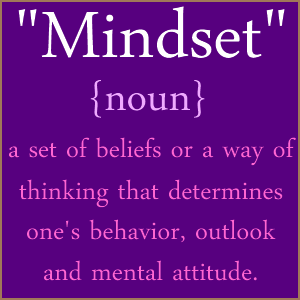 What is a "mindset"? How are mindsets related to gender and other kinds of diversity (or its absence)? Do we all have mindsets? If so, does that make us bad? Are they easy to change?

I looked up the term "mindset" in several dictionaries. Merriam-Webster says a mindset is "a particular way of thinking" or "a person's attitude or set of opinions about something." Another says it is an "inclination or habit" or a "fixed mental attitude or disposition that predetermines a person's responses to and interpretations of situations." Wikipedia's definition, taken from decision theory and general systems theory, includes the concept that mindsets tend to be self-reinforcing:

[A] mindset is a set of assumptions, methods, or notations held by one or more people or groups of people that is so established that it creates a powerful incentive within these people or groups to continue to adopt or accept prior behaviors, choices, or tools.

These definitions make clear that mindsets are habits of thought. They develop over time. They may operate at the subconscious level. Brain scientists tell us how doing a certain thing or thinking a certain way lays down and reinforces neurosynaptic connections. The more we do or think that way, the more deeply ingrained these connections become. This is the root of a habit, a "knee-jerk" way of reacting in thought or action.

Our mindsets, the definitions agree, determine or influence our actions. The definitions also suggest that mindsets can be "fixed" -- that is, hard to change. Once we have developed a mindset, it becomes our "truth," which we perpetuate and defend.

McKinsey & Company has used the term "mindsets" to describe what stands in the way of businesses achieving gender diversity in leadership. Companies can do all kinds of enlightened things to develop and retain women -- and still have only limited success. That is because their actions don't change the underlying, invisible and unconscious ways that individuals think -- in this case, about gender. McKinsey identifies several such mindsets and resulting behaviors, including leaders who are "comfortable promoting those who behave like themselves -- in other words, men -- and fail to appreciate different leadership styles."

In this statement are two key mindsets that hold women back in business: the "comfort principle" and "unconscious images" of how leaders look and behave. In making assignments and promotions, leaders may unconsciously think first of people with whom they have a comfortable relationship -- often people who look and think like they do. We naturally develop an image (a mindset) of how leaders look and act based on the leaders we have seen. If most of the leaders we have seen are white males who lead with a traditional, masculine style (e.g., decisive and dominant), that becomes our image of leadership. A person who does not fit this image (e.g., a small woman of color who leads with a more feminine style [e.g., collaborative and self-deprecating]) may be overlooked at promotion time.

I recently recognized how quickly mindsets can develop. My experience gave me more sympathy for people holding mindsets that I wish would disappear. I developed a mindset that is understandable but is now limiting my effectiveness.

I have spent the last two months recuperating from surgery and resulting nerve damage. I had to slow way down. Everything -- dressing, typing, even eating -- takes much longer than normal. What I get done in a day has been far less than before. Prior to this medical challenge, I might have felt I'd had a productive day if I'd designed or delivered a speech or workshop, followed up with two prospects, written a blog post and done physical exercise. Now I feel I have had a productive day if I've taken a shower, dressed and made breakfast, done my physical therapy, responded to a few phone calls or emails, taken a nap, and maybe written for 15 minutes. This has become a new habit of thought.

It was good and necessary for me to slow down. But as I heal and regain physical function, this new, relaxed standard is interfering with my work, my mission. It is time to step it up at least a bit -- and more and more as I can. But that takes recognizing this (recently developed) mindset about what I can and should do in a day.

Do you see? We should not feel bad or guilty about having unconscious mindsets. They occur naturally. In my case it has occurred in two months. Changing it may take longer than forming it did. Easy come, not-so-easy go!

I cannot judge people for having deeply rooted mindsets that create obstacles for women in business leadership. These mindsets are formed over lifetimes and are reinforced by strong cultural forces. How much harder they are to bring to conscious awareness -- and to change -- than my recently developed mindset about productivity!