Even if you're not into hilarious comedies, you should still watch "The Mindy Project," if only for the clothes. The television series, which was created and produced by star Mindy Kaling, follows the life of an OB/GYN as she stylishly navigates singledom in New York City.

Costume designer Salvador Perez, Jr. is the man responsible for all the outfits worn by Kaling that we have fallen in love with over the past two seasons. Week after week he dresses Mindy in figure-flattering outfits (think bright colors, fashion-forward prints and power-clashing galore), easily making her one of TV's best-dressed characters. As die-hard fans of the show (and the fashion), we were thrilled when we got a chance to talk to Perez and find out a little bit about what goes on behind the scenes. Here's what we learned:

Fashion has become such a huge component of the show. Did you set out with the intention of making the clothes the focal point?

I think any costume designer hopes that their work is appreciated and not every show gives you an opportunity for that. Mindy always wanted [this show] to be aspirational, meaning that it was a show that people saw and then wanted that lifestyle. And you know Mindy loves fashion in her real life so that was an easy component for her. So it wasn't necessary a goal, but certainly a happy achievement 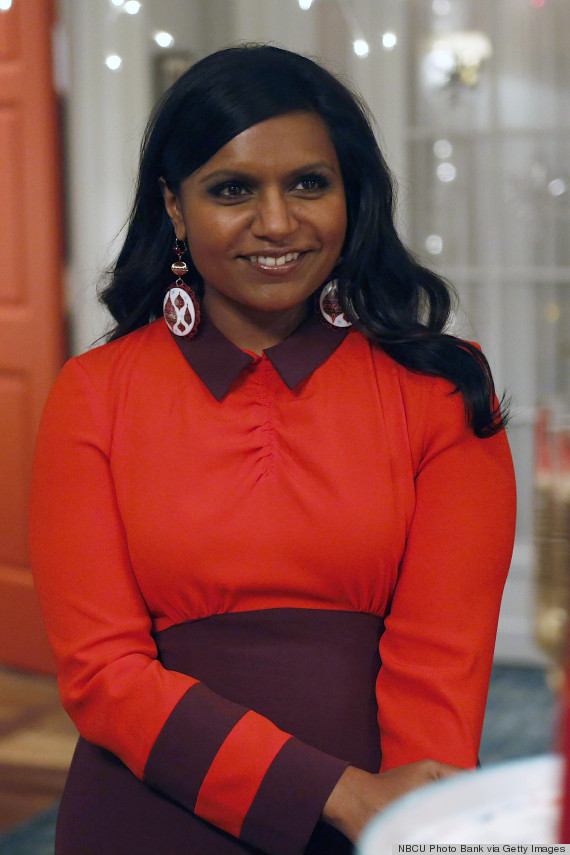 Does Mindy play a major role in wardrobe decisions on the show?

It's a great collaboration. I love dressing the character and Mindy personally has a love of fashion. So we'll send each other links of outfits we see online or a garment, and you know, since she goes through so many clothes. Whether it be in the stores or online, I'm just constantly shopping because we can have seven or eight changes in one episode, so we want to be prepared for that in advanced. I try to build a big closet of date dresses, work dresses and evening wear, so there is always a great stock of clothes for her and we can just pull from it as episodes come up.

Where do you shop?

It seems that Mindy Kaling and Mindy Lahiri have very similar styles. At what point do they diverge?

I think it's funny because you're looking for what came first, the chicken or the egg? Mindy has started to -- like this morning, she was in the makeup trailer at 7am, which means she got up at 5am and got dressed, and she was in a complete ensemble. The jacket matched the shirt with the sweater. We've worked together for two years now and she's seen what I put together for her and now does it on her own. Mindy's personal style is a lot more edgy, and Mindy on the show is more of a urban hipster. So there are outfits that Mindy Lahiri wears on the show that Mindy Kaling wouldn't, but I've definitely seen Mindy changing it up -- she'll find out where I bought something and get one for herself and add it to her wardrobe. I think that Mindy's personal style has grown with access to the clothes she has on the show. Much like Sarah Jessica Parker, she was never the fashion plate before "Sex and the City" that she is now.

Mindy on the show takes a lot of fashion risks. Is there anything she wont wear?

Oh god no, she loves it all. She really is a true fashionista. When I first started the show, I'd walk into a store and they'd find out who I was shopping for and they were like, "Oh yeah, Mindy was just here." Like every boutique in Los Angeles knows Mindy Kaling. Tory Burch, Trina Turk, every store in town knows Mindy personally because she goes shopping all the time. 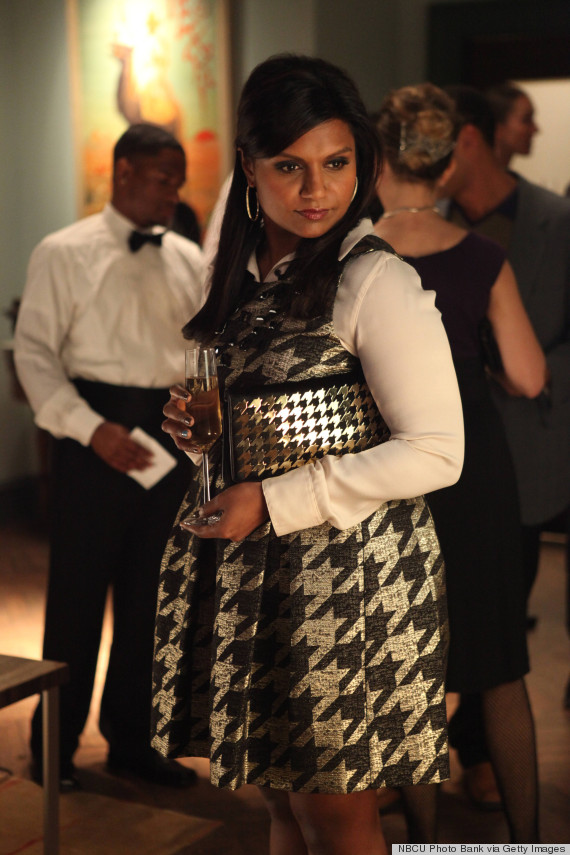 Another thing I love about the show is how it represents a whole array of body types that we don't often see on the small-screen or in Hollywood. In dressing all these diverse shapes, was it always a goal of yours to make sure your characters were in really figure-flattering looks?

As a costume designer, you always want to flatter your actors, regardless of their size. And before I was a costume designer, I made clothes, so I really know how to fit clothing. I think this is one of the reasons Mindy and I get along so well is because she'll find a great outfit and she'll go, "That doesn't work" and I'll go "No, no let me pull here, move this over, take a dart," I can fit her so well. We've been doing this for so long now, I don't even need to do it on her anymore, I can do it on a dress form. And that's the thing, people don't tailor their clothes anymore. I mean you look at shows like "Mad Men" and it was this era where people tailored their clothes and now people want to walk into a store and buy it. Well nothing off the rack fits that beautifully. Any coat that a women puts on should be tailored to her arm because it's sort of one size fits most. Even though you have 6, 8, 10, 12, the arms get bigger. Well, your arms aren't always that size and it's amazing, by just taking in the back of a sleeve and taking a little bit at the waist, how much better you can look in clothes. Whether you're a size 0 or a size 12, you should always have your clothes tailored to your body.

I have to ask about Mindy's short hair that she had at the beginning of Season 2. Did it change the way you dressed her?

Oh, completely. I tried to stay away from collars because I wanted to have a neckline. She has a beautiful neck and we finally got to see it. I loved the wig and I would have loved to have seen her wear it for longer, but you know, Mindy's a diva and she wanted to have that mane back. 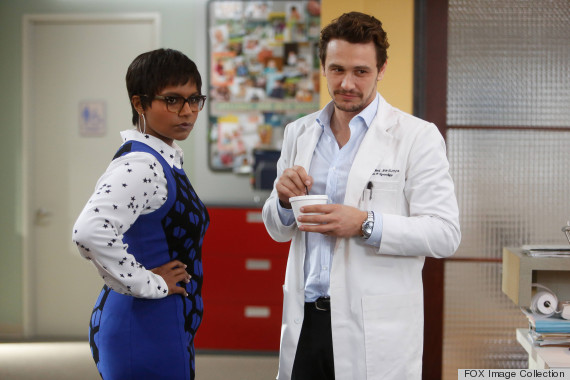 The characters on the show are constantly in scrubs and white coats, but somehow you manage to keep their identity even while in uniform. What's your secret?

It's funny because if you go to any hospital or doctor's office and see how real nurses wear scrubs and then you see what we do on television and film, it's really kind of hysterical. In real life, scrubs are meant to be a comfortable, pajama like thing, but that doesn't look so good on camera. So Mindy's scrubs are completely taken apart and put together so that they fit her beautifully. We raised the arm holes, tapered the waist, shorten the hems. We do that for the boys, too. That's part of the thing, how people wear their scrubs and what they layer them with. Danny is more masculine, so he doesn't get a layer under his scrubs. Morgan, the man child, always gets an undershirt or a long sleeved shirt underneath his scrubs because it makes him look like a little boy.

Are there any other unexpected wardrobe secrets from the show?

It's pretty straightforward, but the one sort of quirky thing is, I probably spend a little more money on Betsy than I should because she is a receptionist. But it's sort of like, it costs a lot of money to look that cheap. We make it look like it's very middle of the road, but there are some very high-end pieces on Betsy that you be surprised to see. Her blouses are the English cotton ones that are from J.Crew and are $150 a piece. A receptionist wouldn't be wearing a $150 blouse. But they have those beautiful Liberty London prints and I love the textures on her, so I'll sort of cheat and splurge on some great blouses for her and put it with a J.Crew sweater.

Is there any character whose style on screen is radically different than their everyday style?

I think Ed Weeks (Dr. Jeremy Reed). I make him such a peacock on the show. He's so put together with the ties and the bold prints and the color, but in real life, Ed Weeks is sort of an English rocker dude in T-shirts and skinny jeans. They are so dissimilar.

What was it like dressing Chloë Sevigny? Were you intimidated since she is such a fashion plate?

I've known Chloë for a million years. She's best friends with my best friend, Rosario Dawson. So I've always thought of Chloë as a fashion icon. So when she came on the show, I was like ,"Oh God, It's Chloë." She's so great because she's like it's about the character. And she is very specific. It's funny because the character was not described by how she looked, we knew what she did for a living, but I got no direction on how she should dress. And so we went off of Chloë. And Chloë wanted sort of minimalist and modern and very sleek, so we went to Helmut Lang and Theory and kept the lines very simple. Because, again, she comes in with the most outrageous outfits in the morning, like denim overalls, and then she comes out as this sleek sort of fashionista girl on camera. So it was a little intimidating at first, but I think we came to a happy medium. 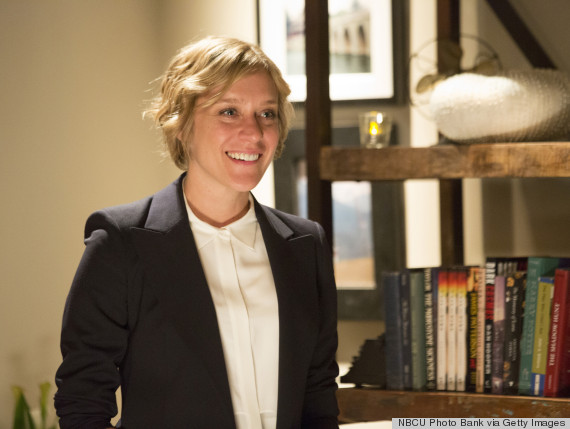 Is there any scene from this season or last that you loved styling?

We started the season with her being in Haiti, and we prepped the scene on a Universal backlot. So every single person in Haiti, we dressed. Normally when you do a crowd scene of extras, they bring their own clothes, but we dressed everybody. We prepared over 1,000 outfits because they changed a couple times. And Mindy had 27 changes in that first episode. But the Haiti stuff became so much that they cut a lot of it out. So you didn't get to see the mass crowd scenes we did for Haiti and a lot of the changes we did for Mindy because it was cut out of the opening montage. But we literally had six weeks of prep for that. People worked all day long for six weeks to get the clothes together, to age everything down, to make it look lived in and not store-bought, and then it didn't get on camera. Well it got on camera, but they cut it down. 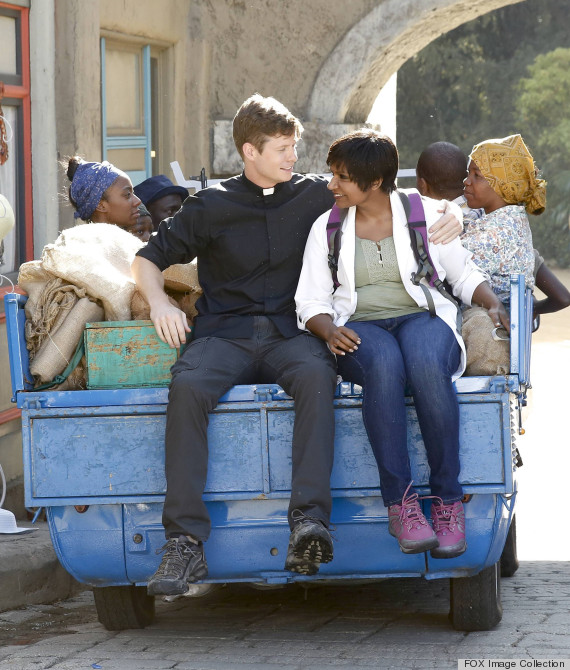 Some of the fabulous fashion from "The Mindy Project"